1913. “It was the best of times, it was the worst of times,” to quote Charles Dickens. It was the year that the federal income tax was signed into law (at 1%). The first sedan (a Hudson) was introduced at a car show. And the first two movie houses in America were opened, one in the metropolis of Manhattan and the other in the little town of Southport, N.C. 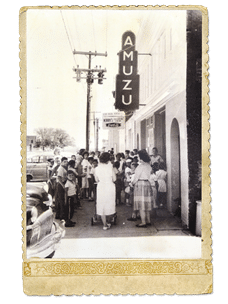 Mayor Price Furpless and C. E. Gause built the movie house in Southport and operated it until the town outgrew it. Then they built a new, larger “palace of entertainment” on the lot next door and opened it in 1918 as the Amuzu Theater. That is pronounced “a-MUSE-u,” as in “entertain you.” The name was selected as the winning entry in a “name the theater” contest.

The Amuzu has been owned and operated by the Furpless family ever since. Price Furpless’s grandson Bill Furpless and his mother took over the theater after Bill’s dad died in 1962, and they operated it for the next 18 years, until Bill decided to close it in 1980 for economic reasons.

As the years went by, Bill realized that he just couldn’t give up his family heritage and this vital piece of Southport history. In reading the comments preserved in well-known local historian Bill Reaves’ three-volume set of chronologies of Southport, one can understand why Bill Furpless is so motivated to renovate the building and revitalize the sentiment that was so much a part of not only his childhood, but also the Southport community.

One of Reaves’ volumes tells the story of Tex Sherrill, a mountain boy who came to Southport as part of the Civilian Conservation Corps (CCC) in 1935. He is quoted as saying, “We used to buy peanuts just so we could have the bags to pop during the scary scenes in the show, but Mrs. Lillie Furpless soon put a stop to that. She used to take a pair of scissors and cut a couple of slits in the bags before she put in the peanuts, and that made it impossible for us to blow them up to burst.”

The Amuzu has a history of supporting worthwhile causes. In 1939 singer Gene Austin appeared in person with jazz musicians Candy and Coco for a benefit concert and to honor his friend W. B. Keziah, editor of the State Port Pilot. In 1944 the Amuzu held a special showing of a War Bond premier movie, and the admission was the purchase of a War Bond. In 1949 they donated a night’s proceeds to Dosher Memorial Hospital. And according to The State Port Pilot’s book “The Way It Was,” some older residents recall receiving free tickets to the movies for turning in tin cans to help reduce mosquito breeding in town. No explanation was given for exactly how or why that worked.

Bill recalls that his father was always very generous.

“He used to let kids in free on their birthday, until he noticed that some kids had quite a few birthdays in one year,” says Bill. “And from then on they all had to pay the full price – nine cents.”

The theater has been featured in several films, including Crimes of the Heart, I Know What You Did Last Summer and, more recently, The Secret Life of Bees. It has always been a point of interest for walking tours.

Bill and his wife, Cathy, hope they can continue to make improvements to the building and restore its prominent place in the community. Website postings from all over the country have poured in, fondly recalling past experiences there and encouraging the Furplesses in their effort to restore the theater. 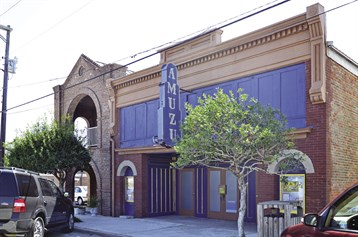 Cathy and Bill reopened the doors in 2005 and put on a series of plays and concerts to raise money for the restoration. However, the building had some pretty severe physical limitations, such as insufficient air conditioning and no restrooms, so the response to those early shows was mixed. But it isn’t anymore. Recent improvements to the building have resulted in sold-out performances. Two handicapped-accessible restrooms were added in 2012, the air-conditioning and heating systems have been upgraded, and a new roof was put on in 2010. The Furplesses have also remodeled the front entrance, added new seating and enhanced the sound and lighting systems.

“It’s amazing,” Cathy says. “All these talented people are coming out of the woodwork. And they’re all from Brunswick County, which makes me so happy.”

The most recent show at the Amuzu was sold out for all six performances and returned by popular demand a few weeks later for a third weekend, which was sold out a week before opening night.

Recurring audiences for future shows will recognize many of the regulars in the orchestra, like Jack Burnish on the saxophone, Connie O’Bryan on the drums, Steve O’Bryan on the bass guitar, Stanley Mandell playing the violin and the harmonica and, of course, Cathy Furpless at the keyboard. They will also hear the fine voices of soloists Ron Thompson, Danny Davis, Andy (Elvis) Williams, Steve O’Bryan and Laura Furpless.

While the renovations have made a great difference, there is still more to be done. The stage needs to be rebuilt, and the actors need larger dressing rooms. The current seating capacity is about 110. Bill would like to jack that up to 160 or so. The façade also needs some attention, although Bill is quick to say, “We never want to change the fancy metal work, but the sign needs some repair, and we would like to add a marquee.”

The next production at the Amuzu will be a Christmas show. The details were being worked out at this writing, but Cathy says it will be a mix of Christmas music from the traditional carols to modern tunes and, of course, a reenactment of the story of Jesus’ birth.

2013 will be the 100th anniversary of the Furpless family being in the movie/theater business. Cathy is not saying what she has in mind to commemorate the occasion, but it is pretty likely that she and Bill will do something special to honor the Amuzu’s return as “the crown jewel of Southport,” 100 years later. 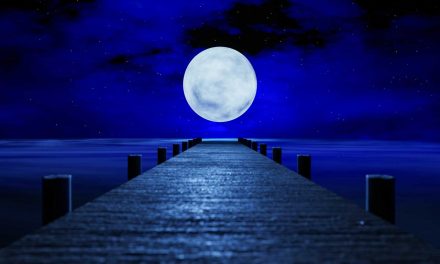 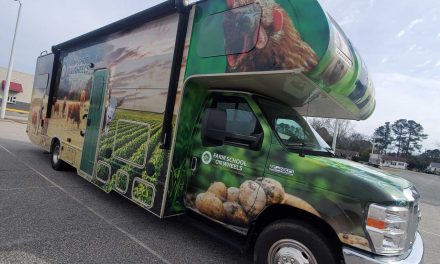 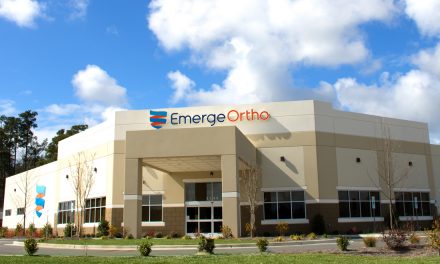