The PubScout checks out The Beer Den in the Lowes Foods in Leland. 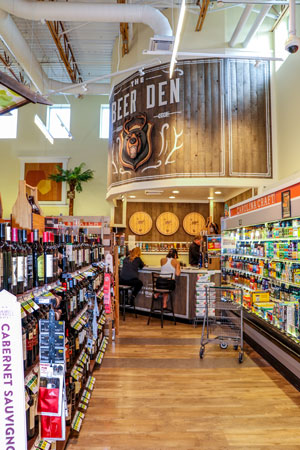 You’ve got to love a food store that provides your shopping cart with a built-in cupholder for your beer, so you can stroll, sip and shop. I’ve written about this distinctly North Carolinian phenomenon before, but much closer to home. It’s called The Beer Den, it’s a sweet deal for beer drinkers, and you can only find it in Lowes Foods stores in the South.

It’s an actual bar in the store with eight beer taps and stools for those who like to bend an elbow, enjoy an exceptional craft beer and chat, not only with the Den Master, but also with anyone else who comes in. Subsequently, new friends are made on a regular basis, and reunions with old friends are possible.

I’m already familiar with the Den in my local Lowes Foods in Ocean Isle Beach, and on Thursdays especially it becomes a mini-pub with a hubbub. I was told that the Beer Den up in Leland right near Brunswick Forest attracts quite the crowd on Thursdays too, when beers are half price, not just for a happy hour, which happens to be illegal in North Carolina, but for an entire day.

When I paid a visit to the Leland Beer Den recently, Susan, an affable gal with her husband, John, in tow, apologized for the absence of her usual coterie of female friends, all of whom attend after getting off work at their restaurant.

Certainly part of that fun is the half-price beer ($4 for four 4-ounce flights on Fridays too), and Beer Den Master Greg in the Leland store goes to great lengths to make his taps interesting.

The Den area is flanked by two long coolers of great beer, as well as beer for those who haven’t quite moved into the craft beer circle yet.

“I try to put beers on my tap that you can’t find along the sides or on the end caps,” he says.

As you might expect, Greg knows almost everyone by name. He also seems to know their beer preferences. He has developed a strong following for sour beers among his patrons, although he is not a devotee himself, opting for barleywines and good stouts. To that end, he had both a 12.2%  KBS (if you have to ask, you’re not into stouts) and a 10.2% Bell’s Third Coast Old Ale Barleywine on tap the day before my visit. Joining them on the dark side was a delicious, albeit comparatively tame at just 5.5%, Holy City Pluff Mud Porter. Being on two wheels, I chose the barleywine and it was excellent — smooth, flavorful and balanced. 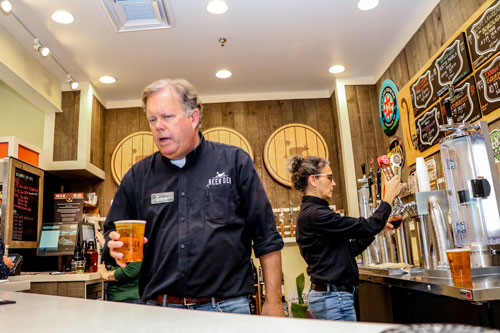 If “tame” was what you sought, however, Ballast point Citrus Grove Gose rang in at 4.2%, a Noble Orange Jasmine Cider Spritzer came in at 4%, and Holy City’s Madam Basil Saison upped the ante a bit to 6.9%. But for the adventurous (and hardy) Double Barrel’s Wilma’s Wandering EyePA clocked a 13.5% ABV rating, just shy of N.C.’s 14% limit. And since it was National IPA Day, Hall of Fame Realtor Chris Creekmore and his workmate John took full advantage after a long workday.

It actually might have been a very long day for Chris, because out in the parking lot, he realized he didn’t have his phone. Beset by that frantic feeling we all get when we can’t find our wallets (and now our phones), Chris rummaged around in the car and went back to The Den, but was unable to locate his device. That is, until he asked someone to call his number, and the phone in our new-found friend Phil’s pocket began to ring. Turned out that Phil, a retired FBI agent who lives in Brunswick Forest, mistook Chris’s phone for his own — and pocketed it. Whether or not he found his own phone after that, we didn’t learn.

While chatting with Chris, who has sold many a home in the Brunswick Forest development, I asked him why this particular Beer Den was such an attraction.

“Brunswick Forest’s proximity is surely a factor, but along with that it’s the convenience and the fact that it’s a unique gathering place.” Indeed, many of the BF folks congregate there, and some even set up tables. I saw a table full of seasoned citizen men having a grand old time, and Phil’s lovely bride was at a ladies’ table with other smiling, youthful-looking members of the fairer sex.

These Beer Denizens gather faithfully each week to socialize, drink good beer and wine — and maybe get their food shopping done. As Realtor John said, “A place like this might make me volunteer to go shopping. I can have a beer AND get something done.”

How much one gets done, especially with some of those high-octane beers on tap, is up for debate. In that regard, it might be best to do your shopping before you grab a seat at The Beer Den and strike up a conversation with the Den Master or other Beer Denizens.

This way you’re assured of a pleasant reward for doing an unpleasant chore. And you probably have a better chance of getting the shopping list completely right. 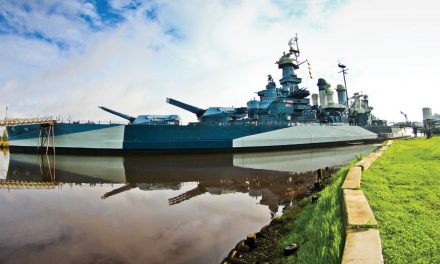 How to Preserve the USS North Carolina Battleship 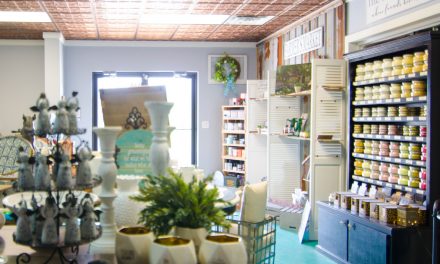 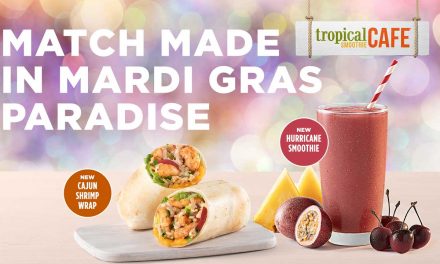 A Ticket to the Tropics