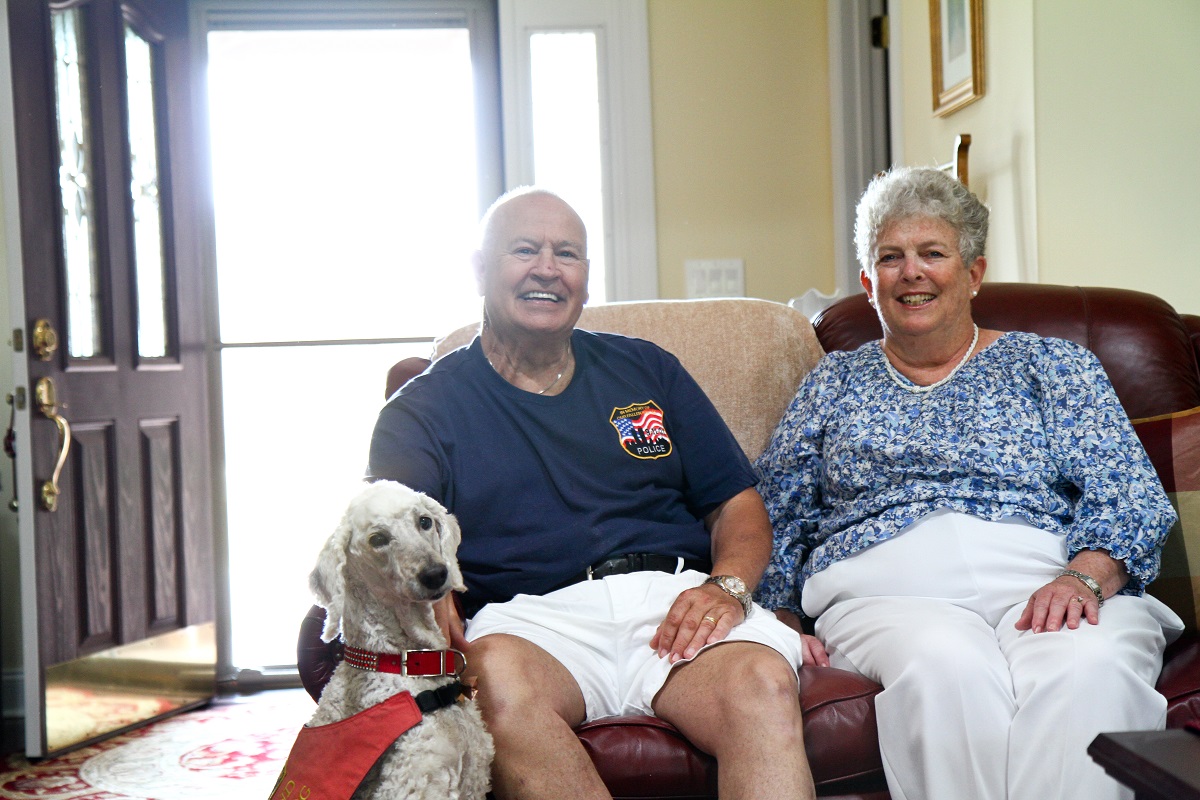 Brunswick County is full of caring and compassionate citizens who could be considered heroes. Hearing stories of these big hearted people often inspires us to find the hero within ourselves.

Although humble about having his story told, it is apparent that Wes Westfall meets the “big heart” requirement. Through the choice of his professions and through many volunteer positions, Westfall has touched countless lives.

Originally from Long Island, New York, Westfall and his wife, Jeanne Reilly, are happily retired and have called Winnabow their home for the past five years. Westfall’s love for people, animals and this country are echoed in his persona and throughout his home. An American flag proudly flies on the front lawn; he wears a Fallen Heroes insignia on his T shirt; and his service dog, Lady, sits devotionally by his side, licking his elbow, while the couple’s birds, Snuggles (an African gray parrot) and Reilly (a Yellow-fronted Amazon parrot), are merrily chatting in the background. As Westfall tells his story, his sense of humor, creativity and enthusiasm for life become evident.

Ever since Westfall was a small child, he knew he wanted to help people.

“Every time I looked up at a police officer in uniform,” says Westfall, “my jaw would drop in awe. I knew that is what I wanted to be … so that I could serve people.”

In 1965 Westfall joined the New York City Police Department as a rookie. He eventually made his way to the elite Intelligence Division.

“We acted in concert with the Secret Service,” Westfall says, “to protect the U.S. Presidents, heads of state and dignitaries from around the world who would visit the city. It was all very hush, hush.”

Within this line of responsibility, Westfall protected such people as President Gerald Ford, President Jimmy Carter, Imelda Marcos from the Philippines and Pope John Paul II, to name a few. He walked beside them, held conversations with them and shared meals with them.

“I remember following Mrs. Marcos around shopping and we went to a restaurant where she ordered me fish in this chocolate sauce,” Westfall recalls. “She asked me how I liked it, but I had hesitated eating it … I finally did try it and it was good.”

On one occasion Westfall escorted Marcos to see the opera Madame Butterfly.

“The brother of the man who had once stabbed Mrs. Marcos was spotted in the audience, so we escorted him out and had him searched,” says Westfall. “When he was cleared, we gave him a ticket for another night’s showing and sent him on his way. I think it was coincidental, but we had to take every precaution.”

Westfall even shared a joke with Pope John Paul II about trading their rings during the Pontiff’s tour of America in 1979.

“I escorted the Pope to Shea stadium,” recalls Westfall. “It was pouring rain and as he was leaving the Popemobile, I asked him if he wanted his umbrella, but he said that he would be okay. I will never forget the goose bumps I got when he walked out into the stadium and the sky cleared and a ray of light appeared in a stream down to his throne.”

Westfall was injured in the line of duty and retired from the police force after serving for nearly 20 years. He not only made sacrifices while being on the force, but also procured two other jobs providing security in New York City. One was for Merrill Lynch.

Westfall also held a job as the security manager for the famous jewelry company Cartier, where he was responsible for protecting jewelry that cost as much as $500 million. Westfall accompanied the company’s gems to jewelry shows, including those where the famous Black Panther jewelry line was being displayed.

Then suddenly Westfall changed careers. With no prior experience, he set up two New York City restaurants, one in Bayside and the other in Oyster Bay. Westfall’s novel ideas coupled with his knack for planning and organizing made these two restaurants successes practically overnight.

“I had a Love Boat theme with a Lido deck,” says Westfall. “I showed the wait staff proper etiquette and went to Boston to pick out décor. I got an Elvis impersonator to perform and invited mayors to dinner … all to get the word out.”

In the early 1990s, Westfall and Reilly moved to Somerset, New Jersey. There, Westfall was a substitute teacher at Rutgers Preparatory School and other local high schools.

“I enjoyed that very much,” he says.

Westfall’s desire to serve did not end with his career in the police force. Throughout his life, he has and continues to volunteer. He is a people watcher and has a keen sense for people’s needs. And he has a great sense of compassion.

In the 1970s, in his hometown of West Hempstead, Long Island, Westfall realized that kids needed a fun sport that would get both boys and girls involved. He founded a soccer team (this being when the sport wasn’t as popular as it is today), and at the time he had an innovative idea to create co-ed teams. The club was named West Hempstead Chiefs to commemorate the Native Americans. The club is still a success 30 years later.

Westfall also was instrumental in setting up a dog park for pet owners and dogs to enjoy. In addition, he volunteered at Robert Wood Johnson University Hospital in New Jersey. After Westfall had quadruple bypass surgery, he joined the Caring Hearts group in which he would talk to patients about the surgery.

“One of the most gratifying experiences was convincing an 86-year-old woman to have the surgery,” Westfall says.

Westfall and Lady, a standard poodle, who is a certified therapy dog, also volunteered helping patients in 14 intensive care units.

Since coming to North Carolina in 2006, Westfall and Reilly continue to do volunteer work. Reilly retired a few years ago and now keeps the North Brunswick Chamber of Commerce’s webpage updated. She is also a member of a hospice group, where she says she has met some wonderful people and is quick to give credit to others and point out their kind-hearted traits.  Westfall volunteers at the Brunswick County Emergency Unit and continues to offer pet therapy.

Last year, Westfall heard about a young marine from South Carolina, Lance Corporal Christopher Fowlkes, who had been killed in Afghanistan. After reading about the controversial removal of American flags on a bank’s property during the marine’s return home, Westfall decided to honor the marine and all of the military.

“It got my dander up, so I decided to host a military appreciation show at the USO in Jacksonville,” Westfall says. “PPD sponsored the entertainment and the musical group, The Imitations, and the Wilmington Police Pipes and Drum Corps provided the music.”

Chief Steve Silverheels, who is the son of Tonto from the TV series The Lone Ranger, gave an invocation, and countless businesses donated hundreds of dollars in gift cards that were given out to military families and attendees.

Westfall and Reilly say they will always be active in the community.

“And I will enjoy using my new metal detector at the beach,” Westfall says with a smile, “and playing my Irish bodhran drum.”

With great sincerity, they both agree, “We will go about doing whatever God brings into our lives.” 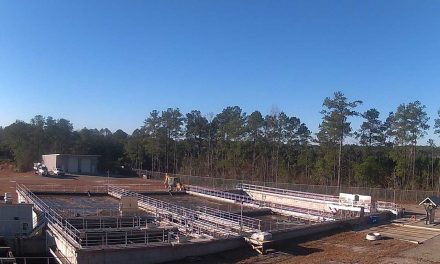 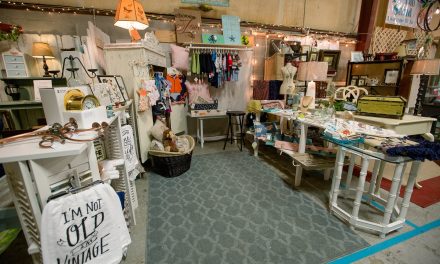 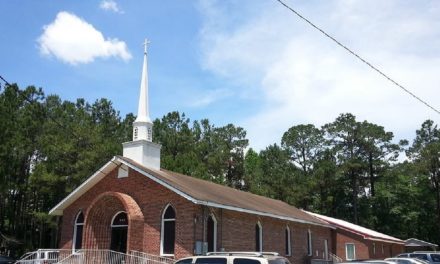 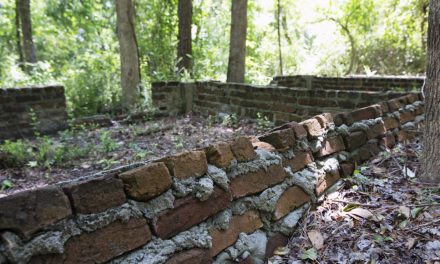 Brunswick Town Once Bustling Port, Home of Governors and Site of Spanish Raid