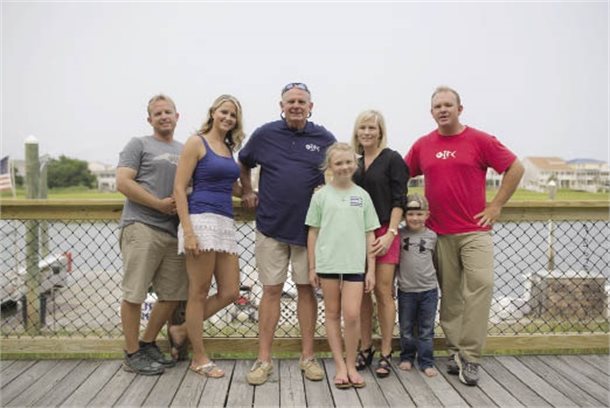 Rube McMullan sits in his “office” overlooking the dock of the Ocean Isle Fishing Center. Also known as the “Liars Club,” the shaded, ground-level deck is the perfect place to view the activity at the first of his many local business ventures. Mack, the family’s aging golden retriever, sits nearby, watching a group launch Jet Skis.

“Mack’s job is to make sure everyone has a vest on before they ride,” McMullan says.

The view is so inspiring it can almost be a detriment for McMullan, especially if he has a scrap piece of paper. As his family and friends well know, Rube McMullan and something to write on are a dangerous combination. That’s where his many big ideas come to life.

In the early 1970s, the Greensboro native graduated from the University of Georgia and began a successful career in real estate and land development around Atlanta, all the while jotting down his ideas for different business ventures. By the time he started a family, his roots and the lure of the ocean started calling him. As a youth, he had spent many summers fishing from the Carolina Beach Pier under his mother’s tutelage. He often watched the boats go by and wished he was on one.

“When my wife and I had our family, we knew we wanted to raise them on the water, too,” he says. “A North Carolinian always finds his way back to his roots.”

Ocean Isle Beach seemed to be the perfect place, so in 1981, the McMullans bought their beach house. There he taught his boys how to fish and boat. 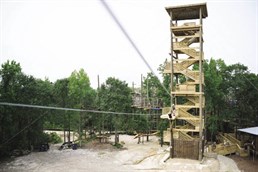 More than two decades later, the avid saltwater fisherman crossed another idea off his list when he purchased a canal-front lot on the island and built a marina there. Sons Brant and Barrett shared their father’s love for saltwater fishing, so much so that both men settled in Ocean Isle Beach after college and became charter captains. The new marina was the perfect place to grow a family business, and the Ocean Isle Fishing Center (OIFC) was born in 2002.

Today the OIFC marina is home to boat and Jet Ski rentals, a restaurant, a gift shop and charter fishing operations. It is also home to six saltwater fishing tournaments a year, including the renowned Jolly Mon King Mackerel Tournament in June.

“The Jolly Mon brings in fishermen from all over the country,” McMullan says.

The jovial entrepreneur owns several businesses in Ocean Isle Beach and Georgia and he and his wife, Linda, split their time between the two locales.

“Sometimes I wish I had gotten a pilot’s license,” he says. “We spend so much time flying down I-20.”

McMullan has passed along his mother’s love for saltwater fishing to his entire clan, and he especially loves fishing with the third generation. They often compete in tournaments as a family team. The McMullan family’s Team OIFC has won several local and regional tournaments and is a three-time national champion on the king mackerel circuit. “We put everyone to work on the boat,” he says. “Even the little ones get a job.”

Captain Brant McMullan met his wife, Amy, 17 years ago on a little excursion that had been arranged by Rube McMullan and his longtime friends Jamie and Melissa Milliken.

“Those two men sent us on a boat ride to Little River one Sunday in May and from that day on we stuck,” says Amy. Today she and Brant run the OIFC operations and she is a charter captain as well, often working at the helm alongside her husband.

Brant and Barrett host a half-hour weekly local television show called “No Limits Fishing.” “The show gives people a glimpse into our fishing family,” Brant says. “It showcases the fresh fish and how it is caught before it is served at our restaurants.”

As the McMullan family has grown, so has its list of businesses. McMullan saw an opportunity in Shallotte when some riverfront property came up for sale. He has purchased and renovated several business properties since then, with youngest son Barrett in charge of rentals.

In downtown Shallotte, McMullan’s visions came together once more when Barrett and his wife, Stephanie, opened the Wing and Fish Company in one of his buildings. “It was the perfect place to prepare and serve some of our fresh catch,” McMullan says. Specials often include deepwater grouper and the specialty, tilefish.

Since then McMullan has added the Ocean Isle Fish Company restaurant at the marina, which Stephanie and Barrett manage as well. A Georgia native, Stephanie grew up 15 minutes outside of Atlanta in Kennesaw.

“Barrett and I graduated the same year from rival high schools,” she says, adding that they did not meet until they were both living in Ocean Isle Beach.

“The family business is constantly growing,” Stephanie says. “It is both challenging and rewarding. We have so many moving parts and it takes a village. Each one of us has our own strengths that we bring to the businesses.

“Rube is constantly dreaming up new ventures, and sometimes we have to tell him to pump the brakes because there are only so many of us to implement these dreams!” she says.

Linda is also an important, if often unsung, behind-the-scenes member of the team that helps Rube achieve his dreams. From composing print materials and developing advertising strategies to opening her kitchen to photo shoots and helping shape the visions for ventures new and old, her talents lend a refined touch to the various businesses.

It was on a visit to a family farm in Mississippi that the seeds for a zipline adventure park were planted in the McMullan patriarch. “The kids were riding this homemade zipline and having such a great time,” he says. “It just got me to thinking…”

McMullan’s Shallotte River Swamp Park opened in June 2015. The 60-acre venue offers ziplines, an aerial park ropes course and swamp boat tours. The rustic, cabin-style gift shop includes equipment fitting rooms for both the zipline and the aerial park. Upstairs there are rooms for birthday parties and corporate training. Porches with rocking chairs flank the front and back of the building.

The zipline area includes five towers, ten lines and three hanging bridges, taking riders on a 2.5-hour aerial tour 40 feet above the pristine swamp. Groups of up to eight guests go through an extensive ground school in which they learn how to use the equipment properly. Two seasoned guides accompany each group. Reservations are recommended for the popular ride.

The adventure is not for the faint of heart, however, and McMullan made sure there was a graceful way to back out of the trip if a rider is uncomfortable with the height. Midway up the 90-foot tower launch there is a short practice run called the bailout. “It’s much better to have an idea of what the ride is like before you get out there,” he says. “Because once you leave this tower your feet don’t hit the ground until you return.”

McMullan rode it several times in the testing phase. “You see 300-year-old cypress trees,” he says. “The wildlife is really unbelievable.”

The aerial park was inspired by an experience he had with his oldest granddaughter, Caroline. “We went on a ropes-challenge course on a trip to Charleston,” he says. “That ten-year-old was fearless.”

At the Swamp Park the three-tier ropes course includes 49 challenge items and is open to guests from ages 4 and older. 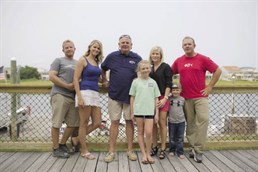 “You start out on the lowest tier and once the guides see that you are comfortable, you can progress up higher,” McMullan says.

Always thinking of ways to include the entire family, McMullan has plans to build a playground under the ropes course for the little ones. “I wanted to have a spot for grandparents and expectant moms to sit and watch the fun,” he says. “We don’t want to leave anyone out.” McMullan plans to add a restaurant next year.

Down at the river, the mildest activity at the park is the swamp boat tour. The 12-person flat-bottom boat glides quietly upriver along the edge of the park. An electric trolling motor ensures little disturbance to the native wildlife, and guests are asked to speak softly. “The boat is a 50-minute round trip and includes a view of the spot where we think George Washington crossed when he visited the William Gause family here in the 1790s,” McMullan says.

The river tour approaches the headwaters of the Shallotte River through a rarely seen patch of swamp brimming with animals. “We have seen deer, beaver, raccoon, turkey, egrets, owls, alligators and snakes,” McMullan says. “We’ve only seen bear tracks so far, but we are hopeful.”

When McMullan envisioned the park, he desired to provide an eco-friendly adventure as well as an opportunity to educate visitors and locals about the rich resources right here in Brunswick County.

“We were careful not to leave a big footprint here,” he says. “The only dirt we really turned up was in the parking lot.” And even that is a permeable gravel surface that allows rainfall to seep into rather than run off. Landscaping is a combination of drought-resistant and native species. The grassy areas are planted with bird feeding in mind. “The grass will not be mowed,” McMullan says.
“The pheasants and turkey will love it,”

Participating in the construction of the Swamp Park was an amazing experience for Amy. “It was so exciting seeing this all come together,” she says. She smiles as she reflects on her life as a McMullan. “All of this is thanks to Rube and his vision he had for the Ocean Isle Fishing Center. It was supposed to be a place that we would one day pull up our rocking chairs and watch the boats come in,” she says.

Brant, Amy, Barrett and Stephanie are still waiting for that to transpire. “I believe that at this stage in our lives all of the McMullans hope that this latest venture with the Swamp Park will keep Rube entertained for a bit,” Amy says. “When Rube gets bored and the fish stop biting, we all brace ourselves for his next great idea. “

And what great idea will McMullan sketch out on his next scrap of paper? “I have to stop for a while,” he says with a wink. “We are running out of McMullans. We will have to wait a little while until the third generation grows up.” 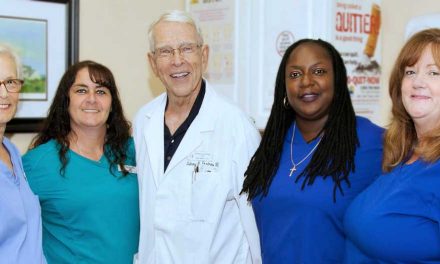 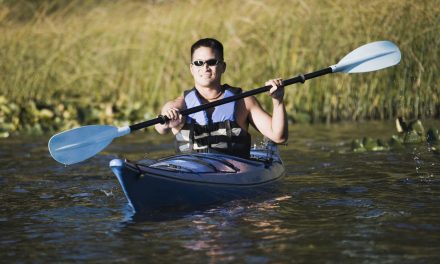