Gaining in popularity in South Brunswick County, disc golf is a sport anyone can play.

Whether it is a movie, a book, a sport or a concert, if it is billed as “something the whole family will enjoy,” they rarely all do. That is especially true if the family members go from age 3 to 83.

Disc golf, however, is notable exception. It’s an activity that is becoming very popular, especially here in Brunswick County, for several reasons: It’s easy to learn; you don’t have to be an athlete to play it; the courses are always open; it only takes about an hour to play nine holes; the equipment cost is minimal; and it is free to play on most courses.

Best of all here locally, Sheila Crider and Kevin Kremler, both outstanding instructors in the Southport area, frequently offer free clinics. They, along with Jeff Pantoja, are responsible for starting and promoting disc golf in South Brunswick County through the St. James Disc Golf and Surrounding Area Facebook page and on Next Door. To date, this sport seems to have gained more traction with men than women, though Crider is determined to change that. She offers a free meet-up and clinic every Monday at 2 pm at the Cougar course in Boiling Spring Lakes.

No reservation needed; just show up.

Disc golf is a sophisticated version of Frisbee, the popular game from the 1950s. The discs look the same, but they are actually different in at least two ways. Disc golf discs are not constructed to be caught, and they are made of an impact resistant polymeric material that won’t crack or split when they hit trees, which they so often do because the game is played in the woods, as opposed to regular golf, which is also often played in the woods but not by choice. 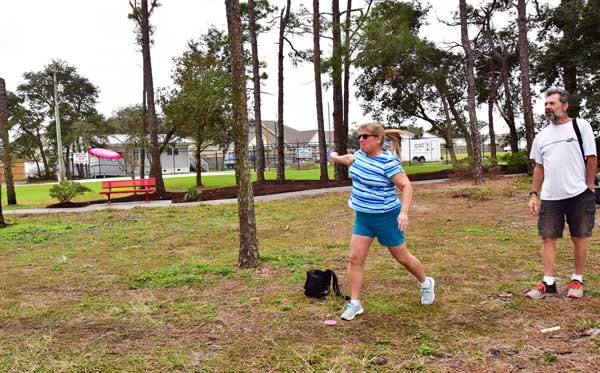 In fact, the name disc golf is a bit of a misnomer in that the game’s relationship to golf is pretty much only in the terminology and scoring. Both games are typically played with a foursome, however, if fewer people show up, that works too. Instead of 13 clubs and a putter as in golf, in disc golf you need only three discs — a driver, a mid-range disc and a putter. To the uninitiated they all look pretty much the same, but each is configured a little differently and designed to go a different distance.

Each hole in disc golf is somewhere between 120 and 500 feet, as opposed to regular golf with holes of 90 to 500 yards. Instead of an investment of several hundred dollars, your total equipment cost for three discs and a disc bag is less than $75. Cost to play regular golf: $50 to $200 a round. Cost to play disc golf: $0.

The object of the game is to get the disc to the basket in as few throws as you can. Most courses are par threes, and the play goes like this. The players throw the first disc, the driver, from a tee pad. Then they use the mid-range disc to get closer to the basket, and finally the third disc, the putter, to throw the disc into the chain-metal basket, which stands about 4 feet high and is about 3 feet in diameter.

That description makes disc throwing sound easier than it is. Here’s the problem: Unlike driving a golf ball toward a wide-open fairway, disc golf is played in the woods where there are trees that intercept your drive and send your disc flying off in the wrong direction. Depending upon the seriousness of the players, you can have do-overs, called mulligans, whenever you want, and you can claim a gimme when the disc is close to the basket.

Each course has one hole that presents a particular challenge. Basket number eight on the BSL course is so high up in a tree that you have to be more than 6 feet tall to get your disc out of it. Short people aim for the pole and count the throw good if it gets close to it. Basket number seven on the Oak Island course requires that you hurl the driver disc across a body of water. Some beginners, particularly women, usually skip that basket.

Both courses are open from dawn to dusk with no reservation needed and are free to use.

My introduction to this sport was at a free clinic taught by Kremler at the Cougar Course. I was one of 14 participants, ranging in age from 3 to 80-something and all ages in between. There were fathers with their sons, a grandfather with his grandson, two or three women, a couple of teenagers and a 12-year-old girl with her babysitter. Some had previous experience while others were new to the sport. 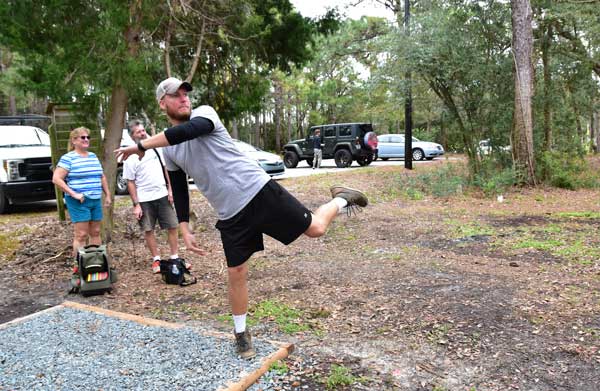 Kremler began the clinic by having us do a series of exercises to warm up, and then he distributed the discs, explaining the differences in them and how to hold and throw each one. At the end of three holes, all of us could send the disc a decent distance, if not always in the hoped-for direction. The 3-year-old sank a putt from about 4 feet away, but this wasn’t his first time out either.

The star of our session was 6-year-old Joe Truett, who started playing the game when he was 3. The son of local disc pro Kevin Truett, the young Truett patiently explained to me that there are two sets of tee pads for every hole, one short and one longer. On the Cougar course, he said the yellow one is the shorter one and blue is longer. The 6-year-old’s wind-up and release is as professional as the pros; on an 18-hole course, he throws two or three over par on almost every hole.

Last winter, Crider’s son, pro disc golfer Andrew Lamont, visited her and treated several of us to an exhibition. According to him, one can learn how to play disc golf “very quickly and after six to eight months you will be pretty good at it.” But, he admits, “To become really good takes years.” Having started at age 10, at 26 Lamont is now very good at it. He has approximately 100 discs (30 to 40 of which are different types), plays four or five times a week and has won several tournaments.

Mark Wagaman is at the other end of the spectrum. He often stops at the course on Oak Island on his way home from Dosher Hospital, where he is the surgical services clinical nurse manager. He plays the course with only two discs, both of which are mid-range.
“It’s fun, doesn’t take much skill, it’s outside, and it only takes 20 minutes,” he says.

For a beginner, Kremler recommends the three-disc lightweight starter set made by Gateway Disc Sports and available from their website at gatewaydiscsports.com. But both he and Crider will let you borrow what you need when you take their clinic. To see their schedule, you can check out the St. James Disc Golf and Surrounding Area Facebook page to find out when and where they will hold the next one. You will almost definitely have a good time, and you may even decide to take up this new, truly family-oriented sport. 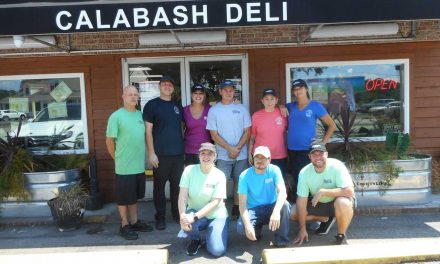