Street-legal golf carts are soaring in popularity in Southport.

It was only a few years ago that an elderly man or woman driving around Southport in a golf cart caused heads to turn and people to smile. Street-legal golf carts were considered a rarity, a novelty and maybe even a toy. But not anymore. According to Southport Police Chief Todd Coring, the number of registered golf carts has grown from 80 to 300 in just the last 10 months. Ask the owners why they bought them and why they love them and you get a whole range of answers. 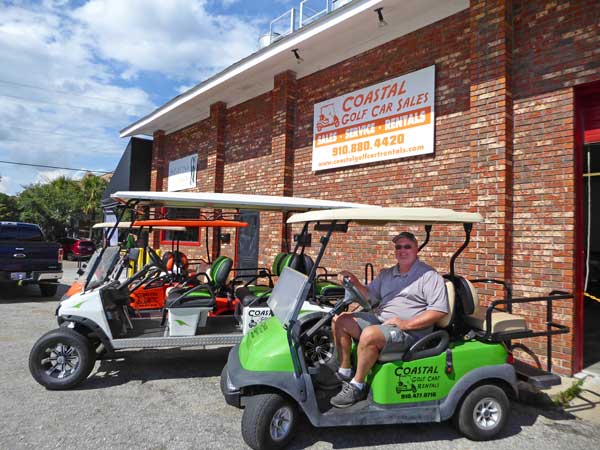 The most frequently mentioned answer is simply that they are fun to drive. Ease of parking was probably the second most often mentioned reason for their popularity. One of the instructors at the Senior Resource Center uses it to get to work because she can park it right on the pavement in front of the building. And the owner of Cat on a Whisk in Southport likes to park hers on the stone walkway in front of her store to free up a parking spot for her customers. The American Fish Company has several designated parking places for golf carts only. And they ensure compliance with a sign that reads “Golf Cart Parking Only. All others will be clubbed.” How’s that for a threat!
The owners of All in Bloom in Southport use theirs to advertise their business. The name All in Bloom Garden Center & Landscapes, along with their phone number, is prominently displayed on the side of their eye-catching red and black cart.

Cades Cove resident Nola Taylor uses hers to get to the Cades Cove pool when her daughter and grandchildren visit, even though her house is within walking distance of the pool. “It’s easier to transport all their pool toys and equipment, and they enjoy the ride,” she says.

Other reasons for owning a golf cart are that they are eco-friendly, nostalgic, relaxing and remind us of the slower, quieter days of yesteryear. Some are even styled after the classic cars. A favorite for anyone older than age 70 is the 1950s red Ford Mustang convertible, available from Golf Cart Outlet in Wilmington.

Over the years, the golf cart buyer demographic has changed. Street legal carts, technically referred to as LSVs (low speed vehicles), are no longer owned solely by old folks. According to Alex Yeniscavich, manager of Golf Cart Outlet in Southport, retirees are still the predominant buyers, but more and more younger folks and even millennials are having fun with them. As an example, the Southport police chief has one and says, “I like to take my wife out to dinner and my god-daughter down to the waterfront.”

The rental cart business is also thriving. Most customers are tourists, but some local residents rent them when they want a new and different way to entertain their guests.
Several golf cart owners have decorated their cart. Tracy Beaulieu admits to having a thing about flamingos, so she put a bright pink one with a matching wind spinner behind her bright pink cart. Other carts have a patriotic theme or a beach look or they support a sports team. Stuart Callari has a protective covering around hers. “I drive it all year round and it’s also good for those quick pop-up storms we get in the summer,” she says.

Anyone thinking about buying one of these fun vehicles needs to know that they are under pretty much the same regulations as a car. You must have a valid driver’s license. You need to have either a license plate from the DMV or a sticker from the Southport police department. However, even if you have the DMV plate, you are still asked to register your cart with the City of Southport and get a sticker. It’s free if you have already had it inspected by the state and have a license plate; the registration costs $25 if you don’t because the city will inspect it for you. You need to have DOT approved tires, seat belts, mirrors, reflectors, head, tail and brake lights, turn signals, windshield wipers, a speedometer and a horn. You cart dealer will provide you with a NC ID number, much like the automobile VIN number. And you need to have insurance. 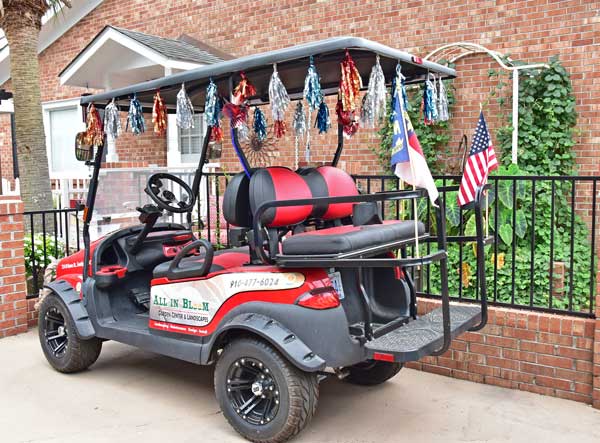 When you get your sticker from the City of Southport, you will also be given a brochure that explains all the rules and regulations. Essentially your license plate or sticker enables you to go on any public street that has a posted speed limit of 35 mph or less. Your vehicle cannot exceed 20 mph, which is probably all it can do anyway.

Regular LSVs are not allowed on the beach; however, there are specially designed wheelchair street legal carts that have extra-wide tires, and these are allowed on the beach in certain designated areas as long as they have a handicapped sticker. As with regular cars, it is against the law to drive a LSV if you have been drinking. Fair warning: Due to the enormous increase in LSVs in Southport, the police are enforcing the rules more conscientiously than they have in the past.

In addition to the rules and regulations, most drivers have their own courtesy code. They know they are slower than automobile traffic, so they pull over to the right side of the road to let a car pass them. But there are still some pedestrians and automobile drivers who wish LSVs had never been invented. Well, they have, they are legal, and they are here to stay. So now the goal is for LSV and automobile drivers and pedestrians to share the road and establish a friendly and safe coexistence. 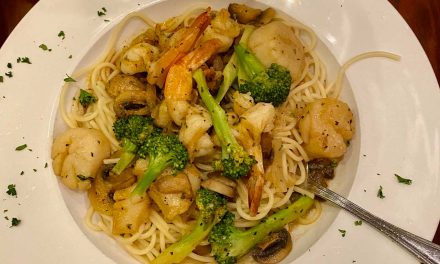 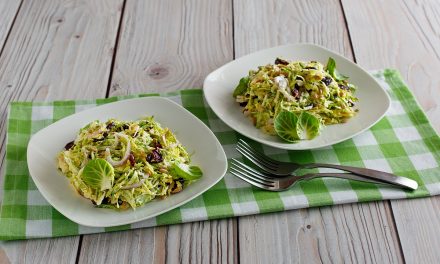 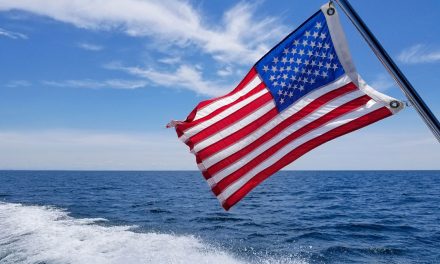 A Safe and Happy 4th of July