Habitat for Humanity and N.C. Coastal Federation team up to manage storm-water runoff with rain gardens.

When Fred and Michelle Caulder closed on their Habitat for Humanity home in the Harbour Ridge neighborhood in November of 2007, the idea of low-impact design for residential development was barely swinging into focus in coastal North Carolina.

Back then, Michelle was planning her flower garden with the usual suspects — daylilies, nasturtiums and ornamental grasses. She had never even heard of a rain garden. Their property is adjacent to the Lockwood Folly watershed, so the couple soon became accustomed to the rivers of rainwater that swept through their yard after a heavy storm — until this year that is.

Thanks to the resources of both Brunswick County Habitat for Humanity and the North Carolina Coastal Federation, the Caulder family’s property is now home to a new rain barrel and two new rain gardens. 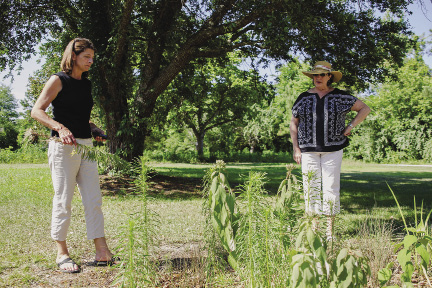 Veronica Carter is excited about the Caulder’s retrofit project, which demonstrates that low-impact development techniques work. She is on the board of directors of both the North Carolina Coastal Federation and Brunswick County Habitat for Humanity.

“Coastal Federation had been working in the Lockwood Folly watershed since 1995, researching methods to improve water quality,” she says.

Low -impact development (LID) was an obvious solution. From her vantage point, she saw the opportunity to merge the Coastal Federation research and development into practical applications for Habitat for Humanity.

“We have a very small budget to install landscaping at a new Habitat Home to begin with, so when we realized we could incorporate LID techniques and save money . . . it was a win-win situation,” says Carter. 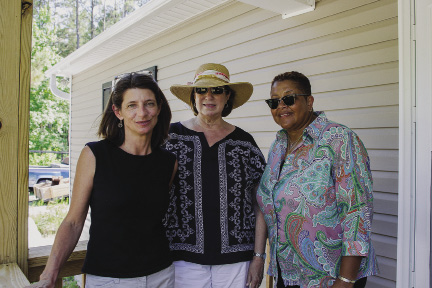 Storm-water management has long been an issue for the low country of Brunswick County, which is home to sensitive marshes and estuaries. A recent study by researchers at North Carolina State University found that low-impact development is a cost-saving alternative to traditional storm-water management. LID can replace the costly curbs and gutters and large storm-water retention ponds. Using permeable pavement for driveways and sidewalks, rainwater harvesting tools such as rain barrels or buried cisterns, and rain gardens, a property can reduce its storm-water runoff by 90 percent. The rain garden is an attractive landscape feature that mimics nature by slowing, capturing and filtering storm-water runoff. The gutter downspouts on a home are directed underground into a shallow basin that is filled with native plants like black-eyed susans and purple coneflowers and several inches of mulch, which serve as a large filter system.

Lauren Kolodij is the deputy director of North Carolina Coastal Federation and heads up the LID outreach. She worked with Brunswick County management and the Lockwood Folly Roundtable, a group of developers, residents and business owners, to develop a set of strategies to protect the Lockwood Folly River. The result is the Brunswick County Low Impact Development Manual and a detailed watershed restoration plan.

“The Lockwood Folly Watershed project was an eye-opener,” she says. “The shellfish waters were beginning to decline from incompatible development such as directing storm water into the watershed. Through research, we found that low-impact development keeps the storm water on site, before it actually becomes polluted runoff. 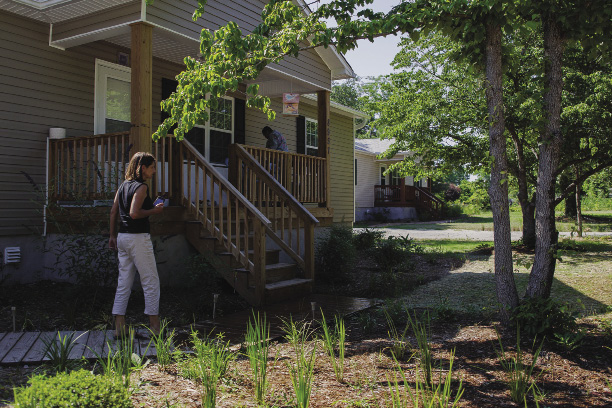 The Coastal Federation has demonstrated LID retrofits on all types of properties in the area.

“We worked with the Brunswick County Government Complex where the Cooperative Extension office is host to a large rain garden,” Kolodij says.

The Winding River and River Run garden clubs and homeowners associations also worked to create rain garden projects. Recently, the Lakes of Lockwood Community was retrofitted with 50 rain barrels and eight rain gardens. The Town of Oak Island even installed a rain garden.

“One rain garden is not going to change the water quality of the Lockwood Folly River, but cumulatively, they will begin to make an impact,” Kolodij says.

The Low Impact Design collaboration is the first joint venture between the North Carolina Coastal Federation and Brunswick County Habitat for Humanity.

“We were excited to be able to retrofit one of our existing homes that was having some severe erosion issues and incorporate LID techniques into all new homes from here forward,” says Deanna Antonio, executive director at Brunswick County Habitat for Humanity. “We really have accomplished a great deal in a short time.”

In July the local chapter of Habitat for Humanity breaks ground on its 50th home, which is sponsored by St. James Plantation in conjunction with its 15th anniversary. The organization intends to use LID from the beginning.

“Habitat homes traditionally are energy efficient, conserve water and have healthy indoor environments, because we use laminate floors and low VOC paints,” Antonio says. “It’s only natural that we move to the outdoors with efficiency and conservation.” 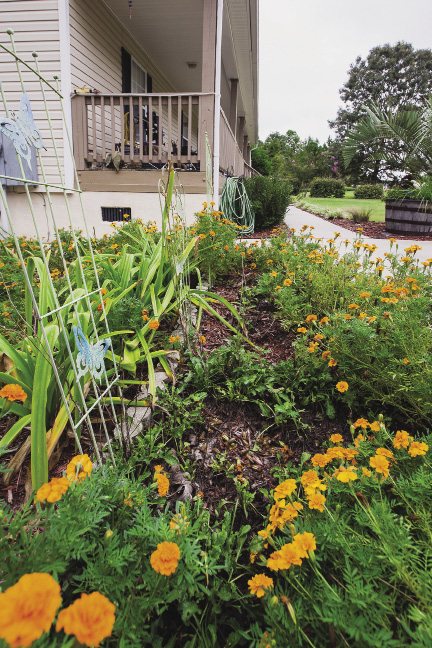 Sea Trail Garden Club is on board with the LID initiative and has awarded a gift to Habitat that will help fund rain barrels at each of the Habitat homes built in 2015.

Carter is extremely pleased with the collaboration between the two organizations and nearly overwhelmed by the incredible amount of community involvement she has witnessed, including the countless hours donated by Habitat’s Landscape Coordinator Linda Rudick, the Coastal Garden Club, the Winding River Garden Club, Brunswick and New Hanover County Horticulture agents, students from UNCW, and the homeowners as well. She and Antonio were especially humbled by the sheer muscle strength of the volunteers, who dug the trenches and basins for the rain gardens. They were especially impressed with the members of the U.S. Coast Guard from Oak Island.

“We wanted to educate people about storm water and have a positive impact on the environment,” Carter says. “Because of the work of the countless volunteers, these projects are doing just that.”

Back at the Caulder home, the excited couple talks about a recent rainfall. “Before the rain gardens, our backyard was beginning to erode from all of the runoff – it was hard to get grass to grow,” Michelle says.

“Now, the rain gardens fill up, drain down in a few hours, and the grass is greener than ever,” Fred adds.

Veronica Carter looks over their handiwork and is proud of the results. “It certainly is a success story,” she says. Beside her, Deanna Antonio and Lauren Kolodij are both smiling; they could not agree more.

If you are interested in adding a rain garden to your property, there are many wonderful resources on the internet, including the “Smart Yards” document developed by Lauren Kolodij and her staff. You can find that document at nccoast.org/uploads/documents/Media%20Room/Special%20publications/SmartYards_online%20version.pdf.

You can learn more about the North Carolina Coastal Federation at nccoast.org or you can call their Wrightsville Beach office at (910) 509-2838.

In addition to building and repairing homes, Brunswick County Habitat for Humanity operates ReStores in Ocean Isle Beach and Oak Island. Visit them at brunswickcountyhabitat.org or give them a call at (910) 454-0007. 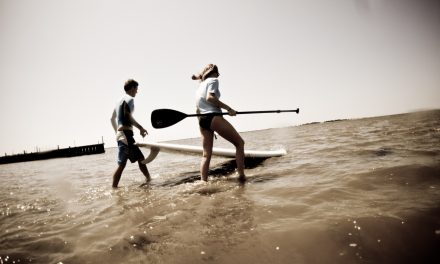 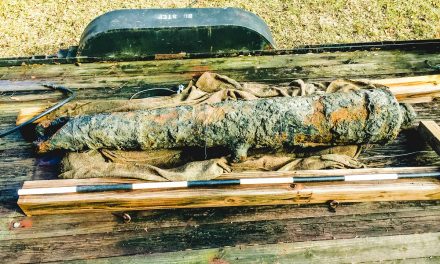 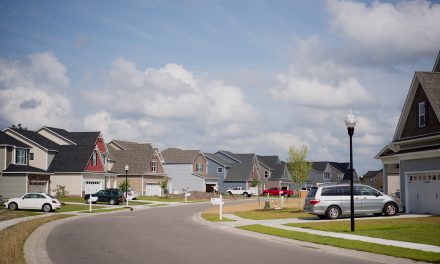 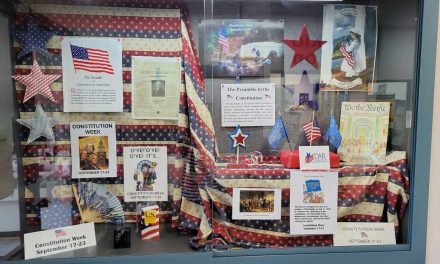 In Praise of the U.S. Constitution