This is a story of the American Dream.

It goes like this: A boy grows up in rural North Carolina. He goes to school, gets a degree and what he calls a “career-track job.” In his spare time, he finds a hobby that can make him money. The hobby turns into a business. The business leads him to quit his career-track job and strike out on his own. The business grows, and the boy, now a man, has a job he loves, a business he’s built with his own hands, and a family.

This man is Jeff Potter, owner of Live Wire Powder Coating in Leland. When he talks about his life, his family or his business, his passion is written on his face as clear as the ink on his arms. He’s a tattooed, motorcycle-riding, beard-wearing man who had the guts to trust in himself and follow his passion to succeed.

Potter moved from Roanoke Rapids, N.C., to Wilmington in 1990, before I-40 connected the city to the rest of the world and before Leland was much more than a dot on a map. After visiting a friend who went to school at UNCW, Potter fell in love with the river and beach and decided he’d call this place home, too.

“I worked in restaurants and did some odd jobs for a while, then I went to Cape Fear Community College,” says Potter. “But I didn’t like it so I dropped out. I knew I needed a degree, though, so I moved to Raleigh briefly to attend Wake Tech and get a degree in Hotel and Restaurant Management.”

When he returned to Wilmington, Potter began working as Food and Beverage Manager for Wilmington’s Landfall Park Hampton Inn.

“It was around that time, in the early- to mid-nineties, that I started riding a motorcycle,” he says. “I took the safety class at Cape Fear and two or three weeks later bought my first bike, a Yamaha. That only lasted a couple of weeks before I traded it in for a Harley-Davidson.”

Powder coating is a process in which dry paint is sprayed onto metal and baked to 400 degrees, at which point it melts and bonds, creating a hard, clean “shell” of paint around the metal. Potter’s first powder-coating projects were motorcycle parts.

“I saw it done, read up on it and decided to try it myself,” he says.

He ordered a spray gun and some paint powder online, bought an oven from Habitat for Humanity and set up shop in his garage.

“I could only do the smallest parts at first — mounting brackets, headlight covers and other little motorcycle and automotive parts — and it was a stretch to fit a pair of handlebars in that first oven,” says Potter.

It turned out that Potter had a knack for powder coating and an eye for detail that motorcycle enthusiasts demanded.

“Really, I started in the industry backwards,” Potter says. “It turns out the motorcycle parts, they’re the hardest to do. They’re small and intricate and, since they’re going on a bike someone spends a lot of time looking at, working on and thinking about, they have to be flawless, so flawless was what I delivered.”

“I knew that I was onto something, so I got online and looked at other powder-coating businesses to see what they charged,” Potter says. “When I saw my orders and the income potential, I began giving it some thought as a business, but never more than something on the side.”

At first, powder coating was just something he enjoyed doing that put a little extra money in his pocket. He kept the thought of it as a business on the back burner and worked as Food and Beverage Manager during the day. That eventually changed.

Potter worked for a few years at his profitable hobby. Then, during a three-month stretch that turned out to be his last three months at the hotel, he noticed something interesting: “I saw that I was earning more than my salary and benefits in a hobby job I did out of my garage,” he says, still amazed after six years of being in business. “That’s when I knew it was time to leave one career and start another.”

In 2007 Potter turned in his keys at the hotel and stepped into his garage.

His business, Live Wire Powder Coating, quickly outgrew his garage and Habitat for Humanity oven and he expanded — three times until he landed in his current location at 161 Poole Road in Leland. There, Live Wire has grown to two full-time employees in addition to Potter, a media-blasting (similar to sandblasting but with garnet rather than sand) trailer, a sophisticated spray booth where primer and finish coats of powder are applied to orders, and an oven that’s 26 feet long.

Though Potter entered powder coating through the most intricate motorcycle parts, he saw the real opportunity for business growth was on the industrial side.

“Bike parts and car parts, I love doing them, I’m a motor-head myself, so I appreciate the detail on them,” Potter says. “But the real consistent business is in industrial applications.”

Ironwork porch rails and handrails, aluminum parts for boats and other marine applications, and industrial boxes and metal fittings (like the fire suppression system components he’s coating for a major home improvement chain or the dock stands he’s doing for a marina remodeling) make up the core of his business now.

If you look around Wilmington and Leland, you can see Potter’s work in a number of places. The Wilmington Convention Center features his work prominently — their exterior signage and interior structural and decorative brackets were all powder coated by Live Wire. And if you look at your neighbor’s patio furniture, you’re likely to be looking at his work.

“One area where we’ve picked up a lot of business is in outdoor furniture,” says Potter.

He points to a room with a gleaming set of iron outdoor furniture — a table and six chairs — with their black powder coating only a day or two old.

“We can take outdoor furniture, whether it’s only a season or two old or if it’s an antique, true wrought-iron, set, media blast it to scour off rust, paint and grime, then seal them up with a coat of powder and they’ll be as good as new,” he says. “Better even.”

In this area, the salt in the air eats away at this furniture that people pay so much for.

“We bring it back to life and give it a few more good years at half the price of replacing the set,” says Potter.

Powder coating is considered a green industry, primarily because the process doesn’t involve any solvents or VOCs [Volatile Organic Compounds]. Potter feels that this helps make him a good neighbor to the businesses and people around him. He also thinks of himself as a good neighbor in other ways.

“I love Leland,” Potter says. “I love working here and having my business here. I love the fact that every day I walk to one of the nearby restaurants — Eddie Romanelli’s, Falcones, Two Guys — for lunch and spend my money locally. It’s great and I feel like we’re really part of the community here.”

It was through local clients that Potter and Live Wire Powder Coating ended up on HGTV.

“A client, an iron fence and rail fabricator, got the job to supply porch rails on HGTV’s Dream Home on Kiawah Island [South Carolina] and I did the powder coating for them,’ Potter says. “The people at HGTV, they like what I did and were intrigued by the process, so they came to do an interview and shoot some video of the process. We were thrilled to be part of the process and get that kind of exposure.”

Live Wire is limited only by Potter’s time and oven capacity, both of which are getting short as he and his wife, Meagan, have a new baby and Live Wire’s customer list continues to grow.

“We’ll have to expand sometime,” he says, “and that may be sooner rather than later. When we do, I want double the oven capacity and I want to add an automated oven system.”

Potter explains that the automated system looks like the system of tracks at a dry cleaners — an overhead track hold hooks that carry parts on a continuous circuit through the priming, cooking, cooling, final coat, cooking and cooling stages, eliminating the time-consuming project of handling parts multiple times.

“Sometimes I feel like I’m the picture of the guy who started with zero, that classic American Dream story,” says Potter. “Man, I’m one of the lucky ones to get to live out that dream.”

Powder coating isn’t limited to one color or texture, in fact, the list of colors is limited only by price — custom colors are special orders and are often quite expensive — but Potter carries hundreds of colors standard. Texturally, it can be glossy or matte or have a hammered, folded or wrinkled look.

The process of powder coating is this:

1. Parts come in, say a chair, and the chair is media blasted — a high-speed mix of air and garnet flecks is blown on and sucked away, removing all the old paint and any rust.

2. The chair is blown off or washed down to clean any dust from the metal surface.

3. A primer coat is sprayed on.

4. The chair moves to the oven where the metal will be heated to a temperature of 400˚ for 10 minutes.

5. The chair is removed and allowed to cool. If a finish coat is required, once cool, it is sprayed and baked again.

The Weight of the Unknown: Why Foster Care is so Important 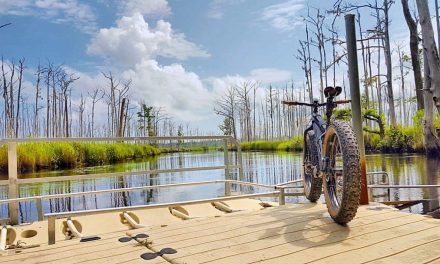 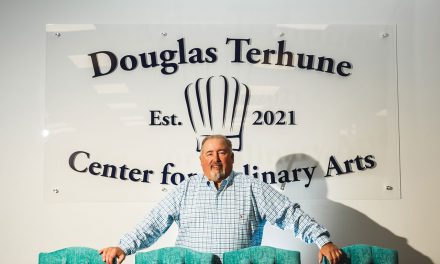