In the winter of 2011 the Leland Town Council voted to build a cultural arts center that would “provide a vibrant hub for the arts in Leland and Brunswick County and draw artists from all over southeastern North Carolina.”

In March 2015 that facility opened with an array of classes, including pottery, painting, drawing, drama, yoga and photography. Classes are for the young and the old, the beginner as well as the experienced.

The building was originally slated to be a Peak Fitness Center, a large commercial gym, but part way through the construction phase, the property owner went bankrupt and the town was able to purchase the property in foreclosure for $560,000 in the summer of 2010. After considering several options for its use and polling the residents, the Town Council decided to build a cultural arts center.

The town hired John Sawyer Architects to design the facility, Monteith Construction to build the building and Jill Brown as the town’s first Cultural Arts Manager. A groundbreaking ceremony for Leland Cultural Arts Center (LCAC) was held in March of 2014, and within one year, the state-of-the-art facility has been able to attract top-notch instructors and a grateful and enthusiastic core of students, not only from Leland but also from the surrounding communities.

The instructors are experts in their fields, each with impressive credentials, and they are passionate about encouraging their students to learn and find joy in the creative process.

After 30 years of teaching visual arts to students in middle school and high school in New Hanover County, Sarah Jones retired and is now teaching Beginning Drawing for adults at LCAC. She began her class with the basics — a discussion of the color wheel and the principles of design. About halfway through the class, the group adjourned to the foyer where they discussed what they had just learned and how it applied to the paintings on the walls there. And then they returned to the classroom, where they continued to practice shading and drawing techniques. 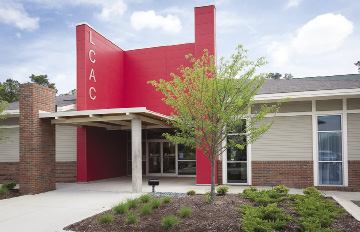 Student Margaret Hewett is a student in the class. “I’m a nurse and I wanted to develop the creative side,” she says. “And Sarah is perfect because she makes it so much fun.”

Five minutes into Motsy Wynn’s class in “Pottery – Hand Building for Children,” Ean Delooze, 6, looked up at his mom, and said, “This is awesome, Mom. This is so cool!”

“I haven’t seen him this excited about anything,” his mother says. “He just loves it.”

When the rest of the class got there, “Miss Motsy” told them that the project for that day was to make baskets. First she showed them how to squeeze the clay through a tool that made it come out like spaghetti. That would be for the grass. It was not easy to tear the kids away from that process and get them started on the handles. The next project was to make a framed clay picture for their mother for Mother’s Day. This involved making the design in the clay and then placing it in a wood frame. The frame is then dropped on the hard floor, the force of which causes the clay to sink inside the frame. The loud bang as the frame hits the floor was clearly right up there with the spaghetti squeeze as a crowd pleaser. The frames were supposed to be a surprise for mom, but it is highly unlikely that any kid was able to keep that secret all the way to May 10.

Although Wynn has a degree in constructive design with a concentration in clay and has been a potter for more than 30 years, this is the first time she has taught young children. “I think it’s great to get them into creative endeavors,” she says. “It translates into so many things.”

Her class is followed by Jacob Herman’s class in “Pottery – Beginning Wheel Throwing.” Here the class has the advantage of state-of-the-art equipment, including Brent Wheels, which are considered to be top of the line, according to experienced potter Betsy Foote. She also says the studio has a spray booth where the glaze is applied, and not all studios have that. “It’s a fabulous studio with great equipment,” she says.

A big advantage of taking a pottery class at LCAC is that the studio is open during non-class time for students to practice what they’ve learned and hone their techniques. Nanci Lemanowicz, a student in the advanced class, likes to take advantage of that. “I was waiting patiently for this (studio) to open,” she says. “There isn’t one in Leland or Bellville and I didn’t want to drive to Wilmington.”

Two adult yoga classes, “Beginning Yoga” and “Gentle Yoga,” are currently in progress. Both are being taught by Jessica Burkett, a certified therapeutic and Hatha yoga instructor with more than 15 years of experience. The class is held in the magnificent dance studio with a state-of-the-art floor made of a special compound that cushions the impact on the back. 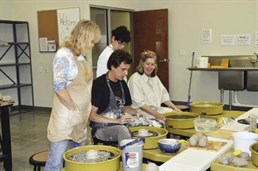 Mary Trowbridge’s “Painting – Beginning Watercolor” class is one of the most popular. She says her class is “full of enthusiastic and promising watercolor students. We’re all having a good time and already producing fine art.” Mary’s painting “Spring Roses” is one of the pieces that was chosen to hang in the foyer. More of her work can be seen at her studio in The ArtWorks in Wilmington.

And what could be more popular with kids ages 6, 7 and 8 than putting on a play, complete with make-up and costumes? Veteran actor and director Ella Reischer is teaching “Drama, Play and Learn.”

“The children are having a great time with pantomimes, expression work, concentration and various theatre games,” she says. For the last class, the kids will put on a performance on the beautiful stage in the fully equipped 360-person auditorium. Next semester, Reischer hopes to teach classes for older children and seniors.

Cultural Arts Manager Jill Brown is excited about all the possibilities for future programs. She envisions many more course offerings, a small concert series, theater productions, catered affairs and possibly even outside programs. She is open to considering whatever ideas anyone would like to propose, as long as they are within the realm of cultural arts. One person suggested a course in math, and she had no trouble turning that one down. “I like math,” she says, “and I think there should be courses in math, but they need to be taught somewhere else!”

As for LCAC and its programs, surely it has exceeded whatever expectations the town and town council had back in 2010 when they made the real estate deal of the century. Leland Mayor Brenda Bozeman sums it up this way: “We are so excited to have a place in Leland that will enhance our town and a place where our citizens can enjoy learning.” 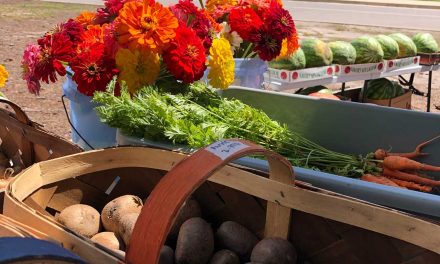 Help Save a Farm 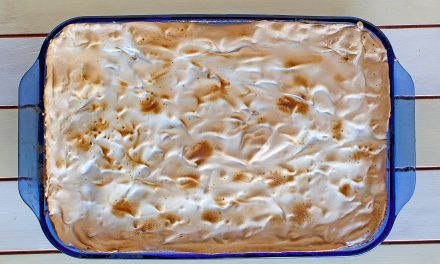