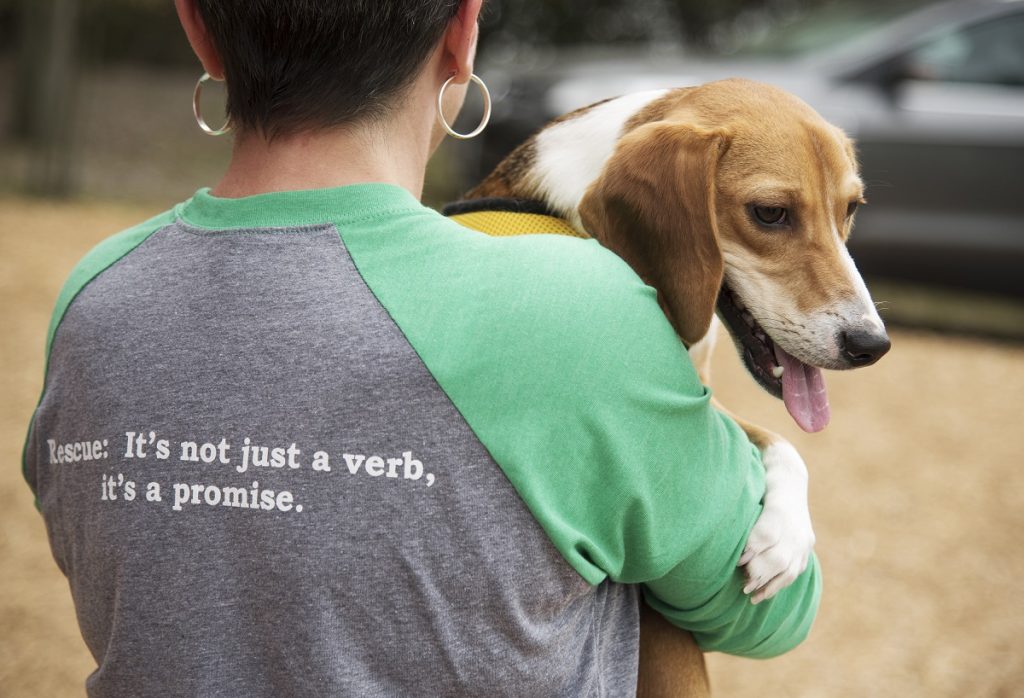 Rooting for the underdog, the littlest guy being the hero … these are the stories that capture our attention again and again. Howie the Dog is one of the littlest guys and his story of redemption has captured the hearts of humans all over the world.

Howie is a beagle who was born in March of 2016, and he still has all the abundant energy of a puppy. When he sees a new face, he comes as fast as he can, eyes aglow, ready to play.

Howie is different, though, in one crucial way: He doesn’t have the use of back half of his body. 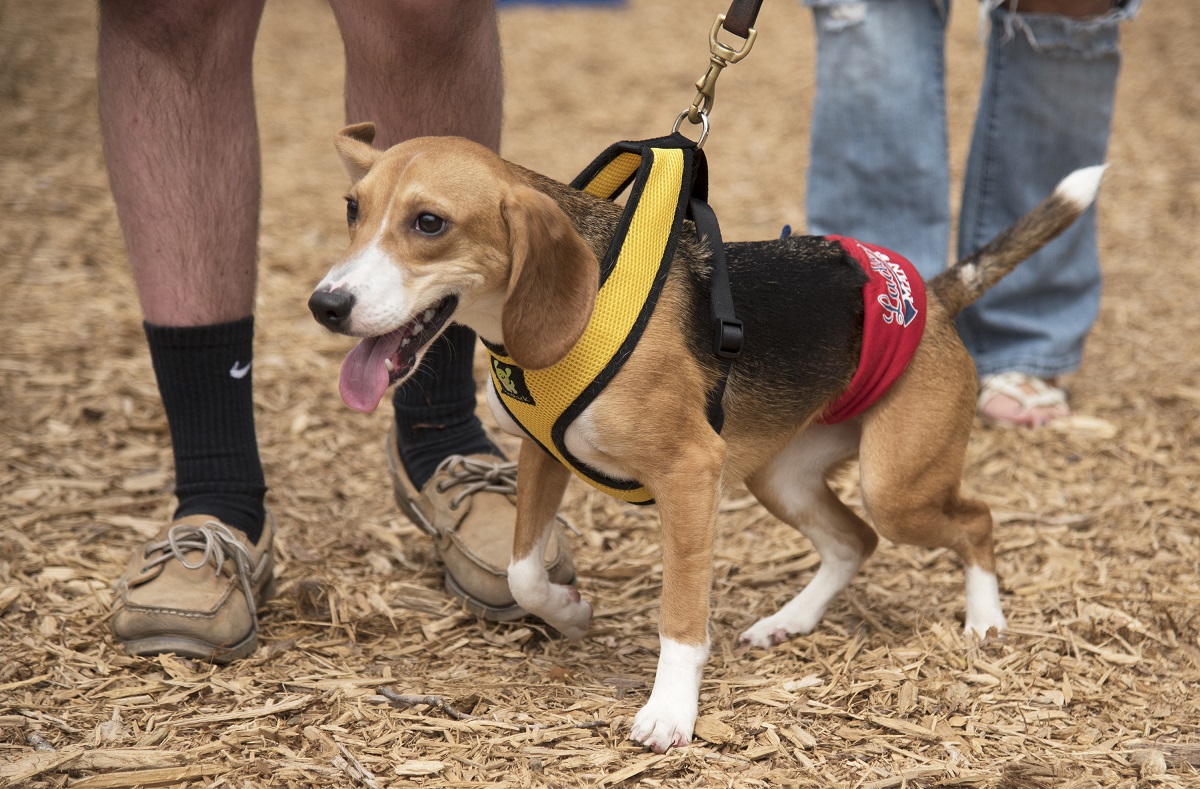 Howie suffered a fractured spinal cord shortly after birth. As Howie comes to greet you, his back legs drag and his tail doesn’t wag. Yet it doesn’t diminish the excitement he emanates. Howie’s clear abundance of unconditional love makes him the dog we root for despite, or perhaps because of, his handicap.

Howie was rescued by Brunswick County Sheriff’s Animal Protective Services (BCSAPS) in May 2016 from a horrific environment. Acting on a tip BCSAPS raided a home in Supply and found multiple instances of animal abuse. They quickly rescued the animals and filed charges against the owner. When BCSAPS discovered Howie, a beagle likely bred to sell for significant profit, the damage had already been done. BCSAPS suspects that Howie was stepped on shortly after birth.

As Howie looked up at his rescuers, the BCSAPS staff wondered, “Who would take a beagle puppy that can’t walk?” 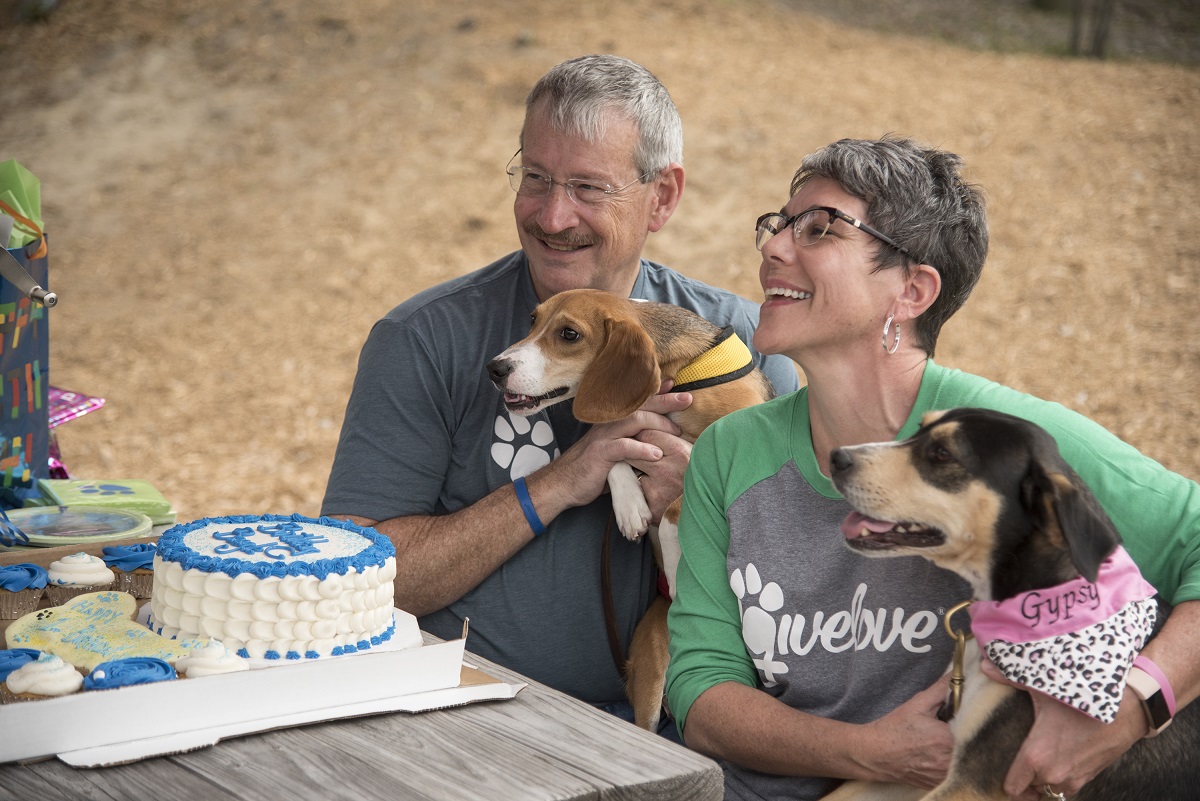 “We gave him the care we could provide but he obviously needed more,” Tolley says. “I reached out to the Highsmiths, who were friends of mine.”

He asked the Highsmiths if they could foster Howie until a permanent home was found.

“He stole our hearts within sixty seconds,” Josie remembers. “But we didn’t know what his progress was going to be, the financial commitment, the time commitment, the total lifestyle change.”

While caring for Howie was intended to be a temporary situation, they threw their energy into him. He arrived at eight weeks old, three and a half pounds and undernourished. As he regained energy, the Highsmiths started the process of addressing his spinal injury.

One of the first things Mose did was set up a Facebook page for Howie: How’s Howie. Mose knew that many people had already connected with the puppy and wanted to know how he progressed.

“The shelter staff and volunteers asked how to keep up with Howie,” Most says. “Facebook just seemed the thing to do. Plus he’s just too cute not to put out there.” 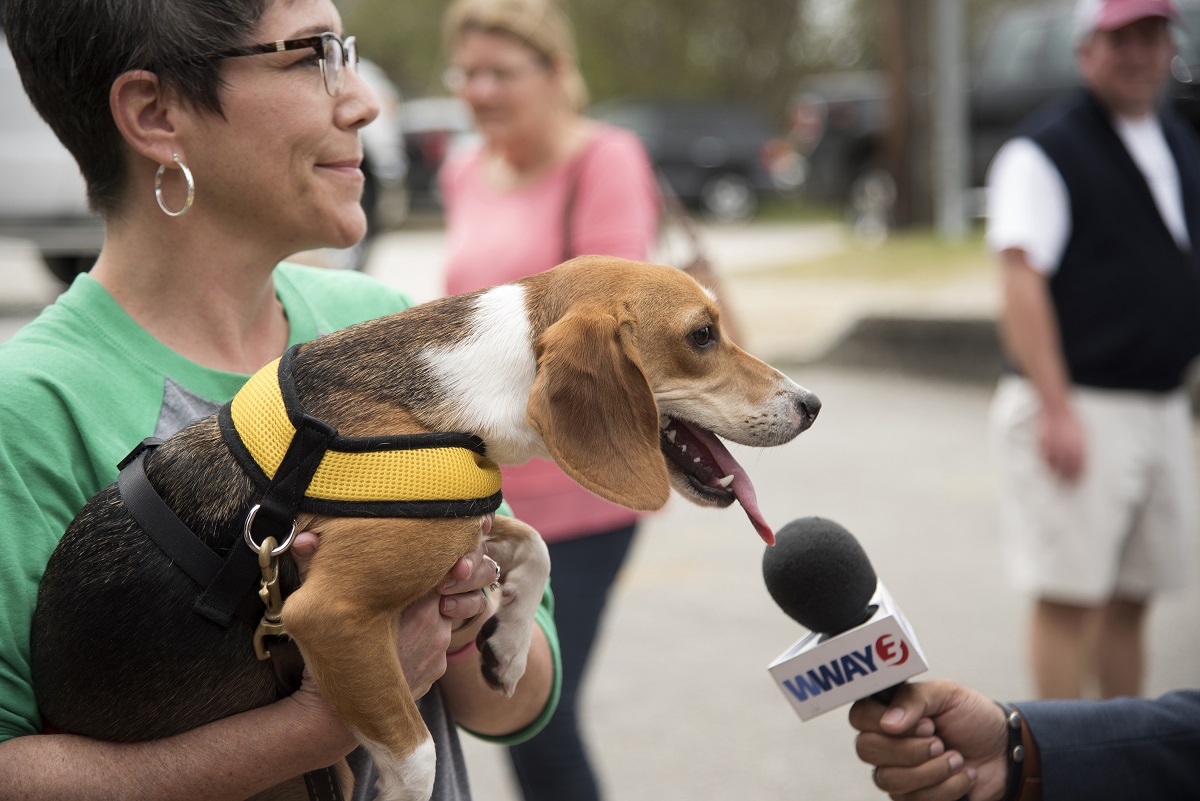 The Facebook Page has been a hit. As of this printing, it has close to 1,900 followers. The page allowed Howie’s story to go viral, being picked up by national websites and local television stations. But the best thing that happened for Howie is that the Facebook community came together and donated enough money to purchase a wheelchair for him.

For a puppy around 10-weeks old without the use of his hind legs, the wheelchair was a blessing. It allowed Howie to move while he gained strength. The Highsmiths were blown away by people’s generosity. They continued to share Howie’s journey on the Facebook Page while they took him to physical therapy five days a week and have kept at it ever since.

Not long after the Highsmiths had begun to invest in Howie, a veterinarian in Garner volunteered to adopt Howie. While they had grown attached to the little beagle, the Highsmiths were pleased with this arrangement. If anyone could understand Howie’s needs and how to help him best, wouldn’t it be a vet?

But when Mose showed up to deliver Howie, the woman wasn’t at the prearranged meeting. That was all Mose needed to snuggle Howie back up in his own car and drive him back home to Leland.

“Howie is a special dog, he is special to us,” Mose says. “I didn’t get the feeling that Howie was going to be special in her care.” 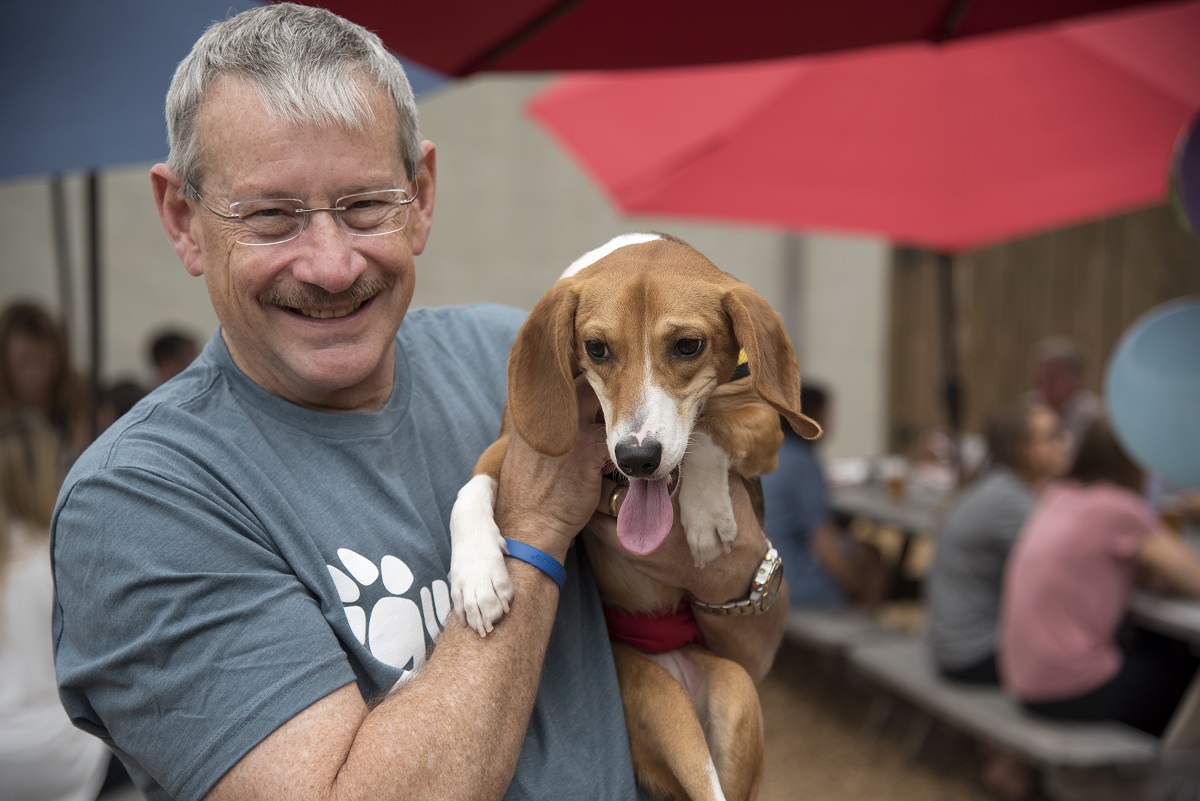 The Highsmiths formally adopted Howie and threw a party for the occasion at Waterline Brewery, where they recently returned to celebrate his first birthday.

“Our lives have changed quite a bit, but we were willing to do it,” Josie says.

Adopting Howie has certainly been a lifestyle change. Howie’s injury not only limits his ability to walk, but also to control his bladder. They must closely watch his back paws for sores from dragging, and while he no longer goes to physical therapy every day, he still has appointments to keep.

His unique needs have made it hard for the Highsmiths to travel and they must come home frequently to check on him. This change is drastic for the active couple. Mose and Josie met two-stepping, are shag dancers and still love to go dancing when they can. They even teach classes in line dancing. They love to listen to live music, Mose was a clown with the Shriners, and they both have busy jobs. Adopting Howie has changed their evenings. But while acknowledging this, they aren’t resentful.

“We learned skills we never thought we would learn,” Mose says.

The Highsmiths believe they made the right decision in saving Howie, and BCSAPS also firmly believes it was the right thing to do. 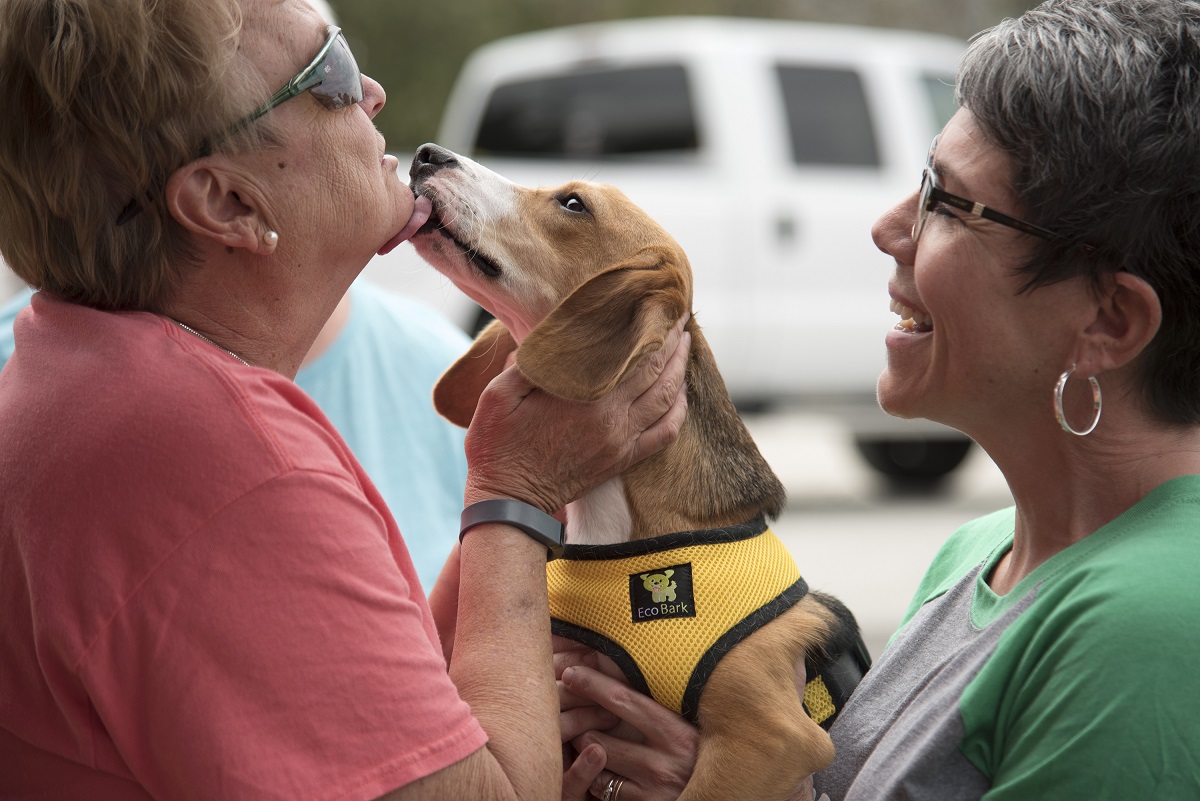 “Howie won the Highsmiths over, which he does with everyone,” Tolley explains. “He has so much personality and he doesn’t know he has a problem. To him this is the norm. He looks at everyone else like, ‘Why don’t you have a wheelchair?’ It just gives you a good feeling to be with him and to help him.”

It’s true that Howie doesn’t realize his own limitations. He runs after tug toys to present to visitors and bounds ecstatically outside as soon as the patio door opens.

“He’s fun, he’s not in any pain,” Josie says. “He loves, loves, LOVES people. He brings so much joy to everybody and anybody that meets him. He’s more of a blessing than a burden.”

From the looks of his Facebook page, it is evident that Howie not only has a joyful life but also that he brings a lot of joy. There are pictures of him making classroom visits to students, boating with his beagle ears spread wide by the wind, playfully tackling other dogs four times his size, and reaching up to lick toddlers’ noses. 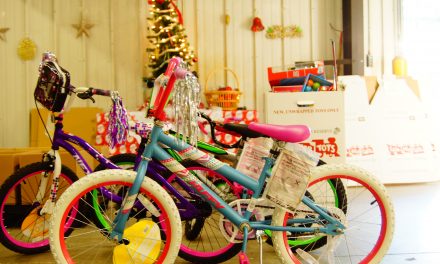 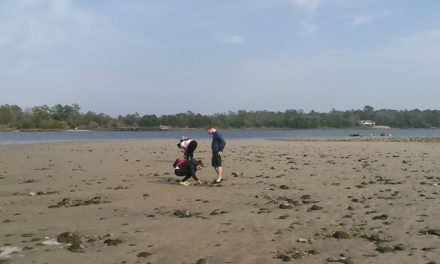 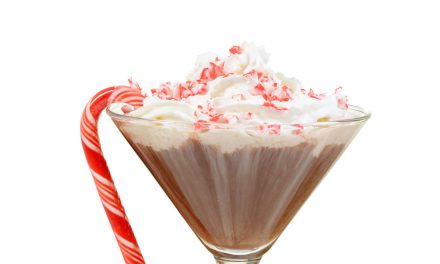