“Let’s play ball, time for church, you have to learn how to fix it yourself.” How many times have you heard these words? As Father’s Day approaches, I find myself thinking about my father and our times together. Were our times together so different from others, I wondered? Over the course of a week, through tears and laughter, I was honored to spend time with several gentlemen who shared stories about their father. 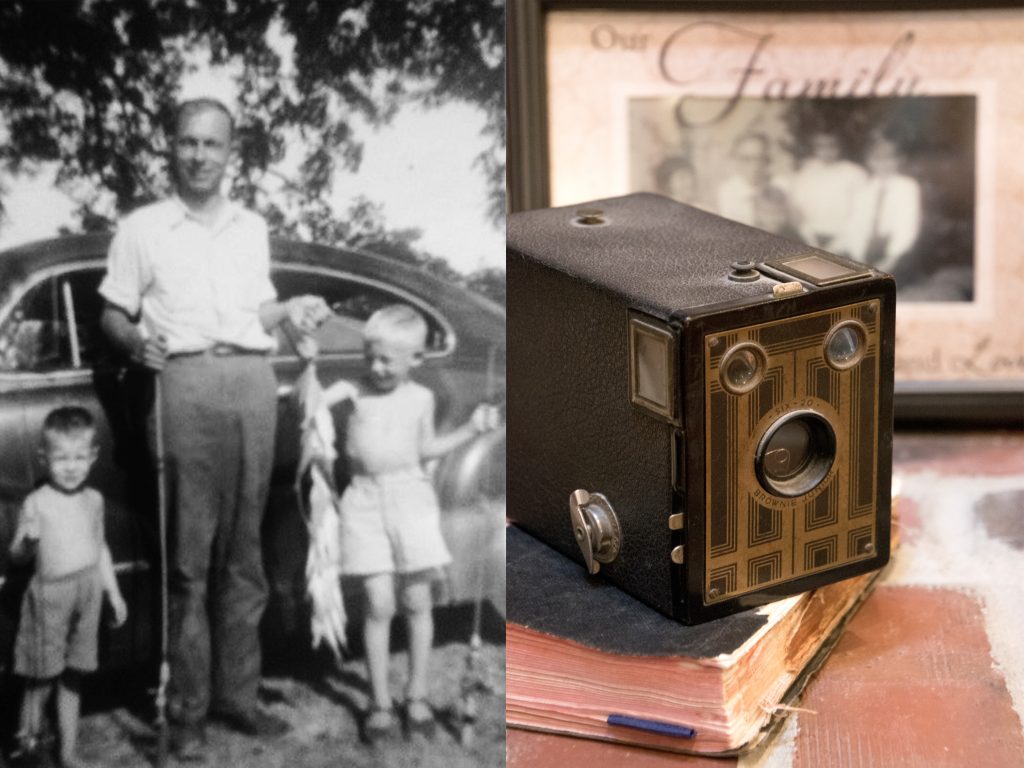 At nine years of age, I asked my father for an allowance. “You want an allowance, I’ll show you what you need to do,” he says. He then came home with a new, red lawnmower. “You know that allowance you were talking about? You need to earn your own money. Once you learn how to mow our yard, when I think you’re ready, I’ll tell you when you can go out and see if you can mow other yards,” he tells me. I mowed our yard every week and then started earning $1 per yard.

Ronald Barnhill, Sr. was born in 1918 in the family home in Bolton along with his four brothers and two sisters. He later moved to Wilmington and worked for Rippy Cadillac (formerly Coastal Motors) for 25 years as an auto mechanic and could fix anything.  He used to tell us “Just because it’s broke, don’t mean it’s not usable anymore. If you can fix it, use it.”

Ronald was in the war but never talked about it. “I didn’t want to be over there, but I wasn’t going to run. If you’re called on to serve your country, you need to do that,” he would say to his family. “Some of the things I never heard my father say are what stay with me the most,” says David. “I never heard him say a cuss word, even when I got older.”

Ronald was a founding member, a deacon and sang in the choir at the Sunset Park Baptist Church. “What made us revere him was his devotion to his God, which he passed on to me and my siblings. Every Sunday after church we would visit grandparents, cousins, aunts and uncles,” says David. Ronald Barnhill, Sr. died in 1976. “My one regret is that I never got to know him as an adult,” says David.

David Barnhill was raised in Wilmington and has three brothers and two sisters. He is retired from Dupont where he worked in Non-Destructive Testing and Inspection. He is also a member of the Brunswick County Beekeepers Association. David and his wife, Connie, live in Leland. 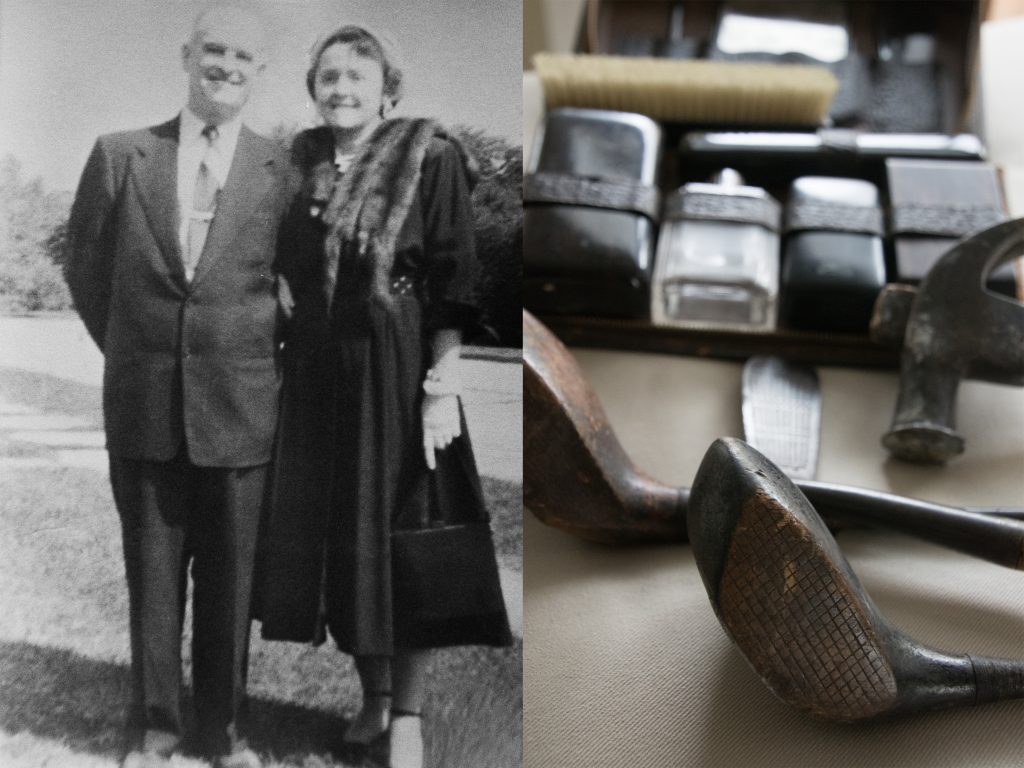 “I was his shadow everywhere.  When he was in the garage fixing something, I was there. When he was changing out windows, I was there,” says Frank, Jr. “When I got a bicycle, he said, “You have to learn how to fix a flat.” He would take off the tire, let the air out of it, and made believe there was a hole in the tube. I would have to scrape the hole, and patch it. ‘This is your bike, you have to learn how to take care of it,’” his father would say. He taught me how to drive my first nail; I still have that hammer. He taught me things around the house, little things, like replacing a broken glass in the garage door.

Frank, Sr. was a quiet man, reserved and honorable, who loved his wife and family.  He never raised his voice, was always calm.  He had a strong faith and believed in living his faith. He would help others in need in a way that no one knew. It wouldn’t be until after his death that the family learned of his acts of kindness. He was very proud when Frank, Jr. became an altar boy.  “The only way I thought I could honor my dad was to serve at his mass as an altar boy. The day my dad died, was the day I got older,” says Frank, Jr. “We survived because our mother, Mary, was ambitious, had street smarts and was a survivor, just like her mother. My siblings and I are blessed to have inherited those qualities,” says Frank.

Frank Shea is retired from the Harleysville Insurance Agency.  For the past ten years, he has volunteered with the Red Cross, working with families of military personnel, blood drives and disaster training. Frank is currently volunteering at the Veterans Hospital in Wilmington every Tuesday afternoon. He and his wife, Nancy, live in Leland and have been married for 53 years. They have two sons, one daughter and 10 grandchildren. 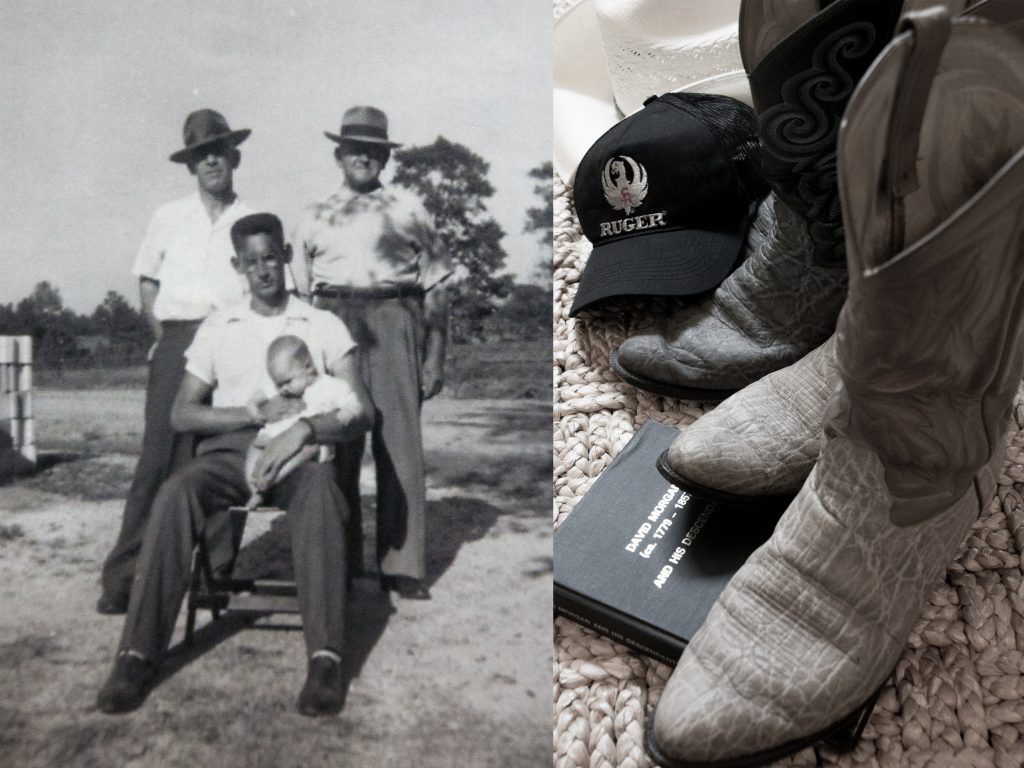 “I am very blessed to have had a father who mentored me and taught me everything he could. Much of what you know and do as a father comes from what you learned from your father” says David. His father, Dumah, was born in 1929 in Wetumpka, Alabama, and had one sister.  He would go on to join the Army and was stationed in Ft. Gordon, Georgia. After moving to Texas, and then traveling to South America, his father settled in Lexington, South Carolina where he worked for the South Carolina Electric and Gas company for 35 years as a shift supervisor.

“Growing up in Lexington, there were always other men around, my uncle and men my father worked with, and they could do anything. If they needed to do something, they would figure it out,” says David. His father was an avid hunter and at one time was a national champion for heavy varmint at 200 yards. His father then went on to custom build rifles.  Fishing was another hobby he enjoyed, especially bass fishing.

“You got to throw it between the tree and the water, that’s how close you have to get,” his father would say. One time he threw out his line and he missed, and said “Oh my, If I miss heaven that far, I’ll bust hell wide open.”

David’s father also enjoyed being a ham radio operator who built his own amplifier which put out one kilowatt of power, so he could talk anywhere in the world. He had QSL cards from all over the world, including Africa and the Red Square. “My father was a man’s man. I knew what men were supposed to be, and I knew if I had sons, I would make sure they grew up to be real men,” says David. His father died in 2005.

David Morgan currently works at the Brunswick Nuclear Power Plant as a technical training instructor and enjoys restoring boats and motorcycles in his spare time. He and his wife, Donna, live in Boiling Spring Lakes and have two sons and two daughters. 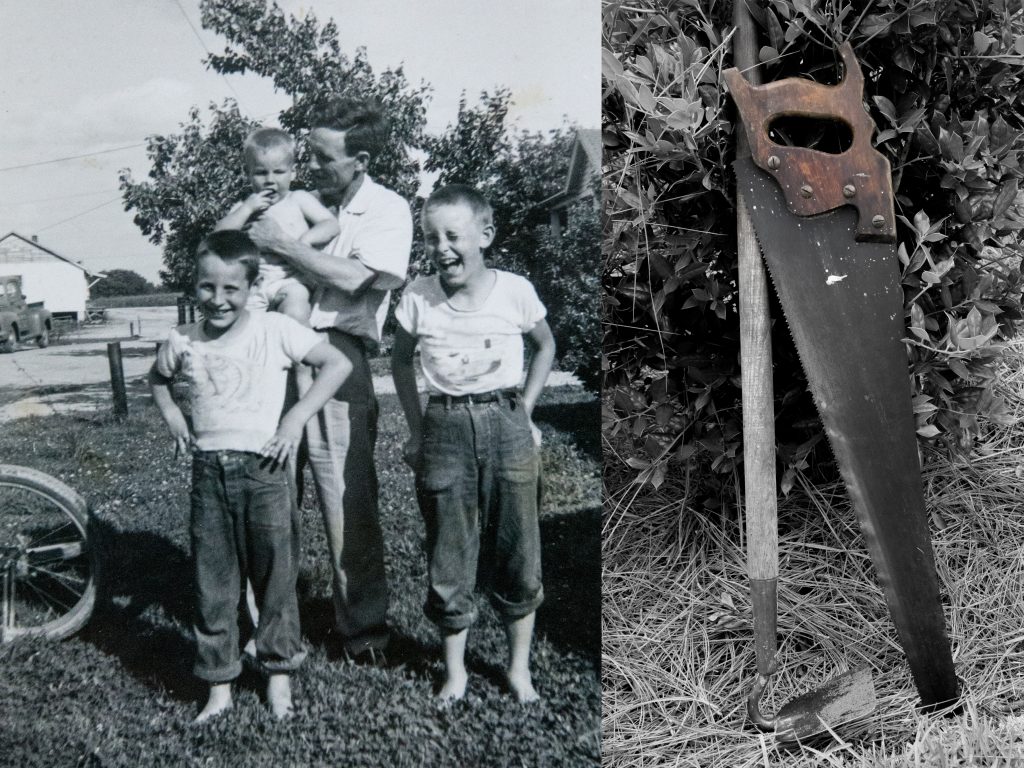 “My father loved to garden, especially tomatoes, cucumbers and radishes. I still have his hoe and use it today in my garden,” says Jerry.  His father, William, was born in 1914 in Franklin, North Carolina and had one brother and four sisters. His father would go on to marry and have three sons.

When Jerry was just two months old, the family moved to Belmont, North Carolina where his father, and mother, worked in the cotton mills. Good times were spent visiting his uncle in the mountains, near Nantahala, where Jerry learned to tie knots, scale and skin fish and hunt for rabbit and squirrel.

During their many fishing expeditions to private lakes near Charlotte, his father would always stop at his favorite ice cream parlor for a hot chocolate and hot fudge sundaes for the boys. When Jerry was driving age and wanted to buy his first car, his dad signed the papers but said, “It has to be an automatic in case I need to drive it because I don’t know how to drive a stick shift.”

On many Saturday mornings his father would say ‘Let’s go to Charlotte and spend the day, just you and me.’ “Daddy didn’t like to drive much, as his eyesight had started to deteriorate, so we would drive to downtown Belmont and catch the bus to Charlotte for lunch at a local diner and then spend the rest of the day going in and out of stores and just goofing around. He was a good dad,” says Jerry.

His father retired from the cotton mill and died in 1996. Jerry worked in the Quality Department for Freightliner Trucking for 36 years where they built the cab for 18-wheeler trucks. His background as a welder and a jet engine mechanic for the Air National Guard was instrumental in him being one of the first of 40 hired for the new plant in Mount Holly.

Jerry Willis is a self-taught guitarist, enjoys gardening, fishing and spending time with family.  Jerry is now retired and lives in Southport with his wife, Ann. 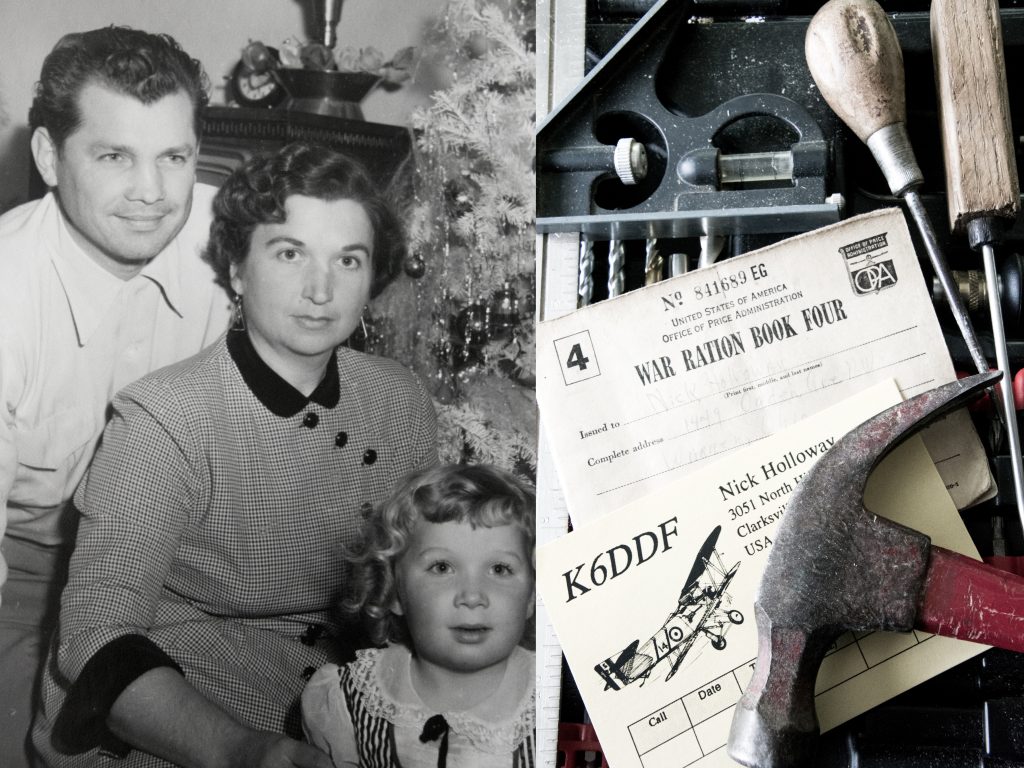 I’ve been told that I have “a look” when I’m not happy. My father, Nick, had that same “look.” It’s not that my sister and I were afraid of our father, we respected him. He never raised his voice and he never raised his hand to us.  Of course, neither me or my sister were angels, but we knew our limits, and we never tested our father.

He was raised on a farm in rural Warren, Ohio during the depression, met our mother and moved her to Los Angeles, where my sister and I were born.

“Sure, I’ll teach you to drive,” says my father, as we drive circles in the parking lot of our local grocery store. And then I buy my first car, a manual transmission VW Beetle. “Dad, can you now teach me to drive manual?” “Of course,” he says. Many, many years later I would ask my dad, “Now can you teach me to drive this tractor?” And it was always the same reply, yes. All my father ever wanted was to be asked.

Lucky for me I learned this very early on and continued to ask him for help and advice. I look back on the times we spent together as a family, our long talks and road trips, and feel very blessed to have had those conversations.  No interruptions, no outside noises; we knew our priorities and it was all about family. My father died in 1997, just two days after Christmas.

Barbara Sammons and her sister, Francine Menor, are both retired and live in Southport.

What can we learn from our fathers?  Everything. Open your hearts, listen with your ears and spend time together. The years go by all too quickly. Catch every fleeting moment. You will be rewarded with more than you can ever imagine. Happy Father’s Day.