The Town of St. James celebrated its 15th anniversary with four days of parties and events.

On July 1, three days before the Town of Southport and the rest of the country honored our nation’s 238th birthday, the Town of St. James celebrated its 15th birthday with back-to-back activities and events for everyone. 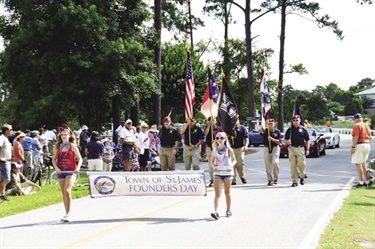 St. James holds its anniversary celebration every five years, and the Founders Day Committee stretched this one out spanning four days. It began on June 28 with a family cruise down the Intracoastal Waterway. More than 100 optimistic souls ignored the threat of rain, picked up their boxed lunches and boarded the Winner Cruise Queen. This was followed by an adult cruise for those who were willing to brave the heavy rains and drink their way down to Holden Beach and back.

The next three days were picture perfect, with blue skies, moderate temperatures and low humidity, much to the relief of the several hundred families who had grandchildren visiting.

On Sunday the kids were treated to “Lynne and the Wave,” a family entertainment group that knows what kids like to do. The older folks enjoyed a nostalgic moment when the kids played the modern-day version of musical chairs — with hoops instead of chairs — and the DJ played “Rock Around the Clock.”

The first event on Monday was a fishing derby for kids from ages 2 to 16. One hundred and fifty very excited fishermen cast their line, caught a fish, bagged it, ran to get it weighed, and watched it being thrown back in the pond. Then they started the process all over again until it was time to have pizza and collect their souvenirs and prizes. 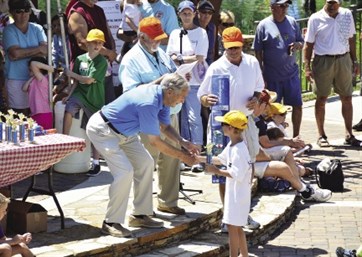 St. James Plantation developer and “patron saint” Homer Wright was on hand to help award the prizes for the biggest fish in each of four age categories. Nine-year-old Johann Meissner, grandson of St. James residents Joe and Mary Lynn Meissner, was the day’s big winner with a 4.9 lb. catfish. He also caught a one pound bass and several brim fish.

An informal survey was taken and the result was unanimous: When asked who taught them how to fish, every kid who was polled smiled and said it was their grandpa. One kid turned around and pointed to the two people sitting behind him and said, “thems.” “Thems” would clearly be grandma and grandpa by anyone’s guess.

Dick Lefebvre and Bob Paloncy, co-chairs of the event, stocked the Woodlands Park Amphitheater Pond with 1,400 brim fish on December 11, 2013, and they fed them every day until three days before the fishing derby. Dick said the pond also had a good number of catfish and bass. According to 9-year-old Octavio, “The bass that just swam by here was about half the size of me.” All the fish that were caught were returned to the pond and are ready to bite on the next fisherman’s worm.

Since a birthday isn’t really much of a birthday without a cake, the town served cake and coffee on Monday afternoon at the St. James Community Center, where visitors could also read about the history of St. James Plantation and the incorporation of the town on July 1, 1999. They learned that the name St. James was suggested by Homer Wright’s brother, Jim, who discovered that back in the early days, when Southport was Smithville, the Episcopal Church established a parish a few miles north of there and called it St. James Parish. The mission of the church was not only to serve the religious needs of its parishioners, but also to settle the squabbles among the early settlers and bring order to the community. The Wright brothers decided to honor the area’s heritage and preserve the name.

Visitors to the exhibit could also buy a T-shirt, hat or plastic water glass to remember the town and the day. 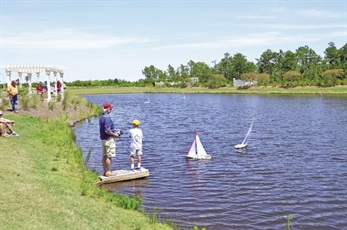 On Monday afternoon the S held a very colorful regatta. Under expert supervision, grandchildren were allowed to try their skill at sailing these radio-controlled boats. There were a few collisions and at least one ran aground in the reeds, but there was no permanent damage, and the kids as well as the adult spectators came away with a new appreciation for the difficulty of that sport.

The day was topped off with Andrew Thielen and his Big Band at the Woodlands Park Amphitheater, where an estimated 175 folks enjoyed his music and a few even danced to the familiar tunes of the 1950s.

On July 1, the town’s actual birthday, St. James Drive was lined with spectators to watch what everyone said was “the best St. James parade ever.” According to Nancy Laudone, Founders Day parade chair, there were 30 entries — everything from neighborhood floats to special interest groups and clubs in St. James, outside vendors, the South Brunswick High School Marching Band, at least 20 kids on bikes decorated with red, white, and blue ribbons and streamers, and, of course, all the St. James fire trucks and EMS cars, along with current and past mayors and town officials.

Earl Dye, the town’s first mayor, and Gary Tagtmeyer, first president of the POA, received a thunderous applause and shouts of “thank you.” But the biggest show of appreciation was for the Operation at Ease float with Staff Sergeant Joseph Kerr, Jr. and his family, and the golf carts carrying World War II and Korean War veterans. The parade was patriotic and it was also personal, a fitting tribute to the town the residents love and to the service veterans who fought to let all Americans have the lifestyle we all enjoy.

Later that day about 1,600 people gathered on the lawn of The Reserve Club for a barbecue cookout provided by all four clubs and a concert by the ever popular Mike’s Garage Band. MaryAnn Wennemer, Founders Day chair, must have breathed a grateful sigh of relief that the eight months of planning, recruiting, meetings and phone calls had finally come to a very successful conclusion. Thank you to MaryAnn and to all the committee chairs, volunteers and service organizations and to the developer and the town, as well as the many outside sponsors who helped fund the events.

Shortly after 9 p.m., spectacular fireworks were shot off from the back of The Reserve driving range to end what had been a perfect four-day celebration to commemorate the town’s founding and to pay tribute to those who have helped make it the place 3,600 residents are proud to call home. 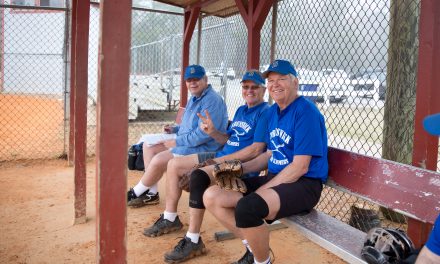 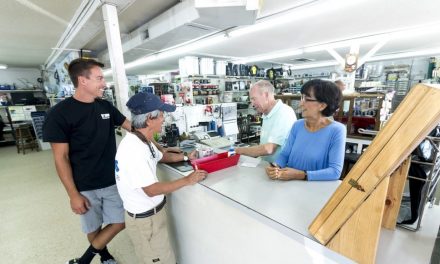