Meet 10 young professionals who are the up-and-coming talent and future leaders of Brunswick County.

What follows are profiles of 10 passionate and noteworthy professionals — all of them younger than 40 — who are working tirelessly in the fields of retail, technology, design, healthcare, real estate, finance, landscaping, sports, event management and civic capacities to contribute to the longevity and viability of Brunswick County.

Future 10 is a collaborative project of Brunswick County Chamber of Commerce and South Brunswick Magazine. The two entities started the Future 10 tradition in 2012, introducing the first group of young professionals who are community-minded and enthusiastic about Brunswick County and who live up to the chamber’s motto of Building Community and Supporting Business.

Everyone involved in this project is excited to introduce the next generation of Future 10 leaders for 2018.

This isn’t a competition, but a nomination-based search in which coworkers, supervisors, employees, business owners, friends and family are invited to recommend exceptional young men and women who not only contribute to the current and future success of the county with a proven commitment to excellence in their careers, but also provide inspiration and leadership for other young people.

In the following pages you’ll hear their stories and come to see that they, like Future 10 alumni before them, are setting the pace for progress and making a positive impact on the future of Brunswick County. 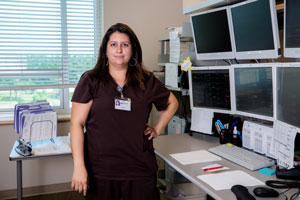 Before becoming the EKG/telemetry lead, Lauren Haigler started her career at Novant Health as a Certified Nursing Assistant in the maternity department. While working in the maternity center, Haigler saw first-hand that many families didn’t have the basic needs for their baby like diapers, clothing and car seats.  So in 2015 she created and organized the county’s first annual Community Baby Shower. In just six weeks she gathered community support, bought supplies and arranged for Brunswick Medical Center to provide information on breastfeeding, child birth classes and car seat safety checks for the inaugural event. The shower continues to grow. Last year more than 150 people attended, and Haigler and her team gave away more than 300 baby outfits, 500 diapers, 200 toys and books and 150 toiletry items.

Not only do her drive, forward-thinking attitude and leadership keep the event successful year after year, it’s also her passion for helping people. “I’ve worked in hospitals since the age of 17 because I like to help people,” Haigler says.

In her new role providing cardiac testing, stress tests and electrocardiograms at Novant, Haigler still plans the annual baby shower. Her commitment to the families and admiration for the community to step in and help is what keeps her involved. “I want this shower to continue years from now. This community means so much, we’re all growing together and helping each other in our own areas,” she says.

The Future 10 recognition makes her “grateful for the blessings my family and I have been given.” She says she is honored by the award but says “it’s not about the recognition, but wanting to share with others.”

When she’s not monitoring patients and making them feel comfortable and relaxed, Haigler spends her free time with her husband and two daughters at the beach or taking trips to the mountains. She is also very active with the Girl Scouts of Brunswick County as a troop leader, a role in which she is able to make an impact on the lives of young girls in the community. 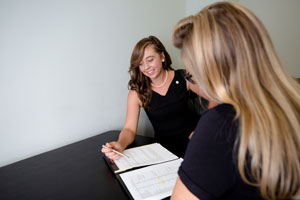 Lindsey Jenkins has made a career out of helping people make a fresh start. First in banking and now as a broker/Realtor for Century 21 Sweyer & Associates, she is the problem solver who knows where to begin when her clients don’t.

“Whether I’m working with a first-time home buyer or a client who recently lost a loved one and needs to get that property on the market, I love stepping in, taking the reins and helping,” she says.

A North Carolina native from the Charlotte area, Jenkins vacationed in Brunswick County her whole life. In 2011, when she needed her own fresh start after her son’s father passed away, Brunswick County offered the peace and change of scenery she and her son were looking for. She soon switched careers from banking to real estate and has made a huge impact in the community helping clients with some of the biggest transactions of their lives — and making successes of her own.

Within only six months, Jenkins is on target to close more than $2 million and is one of six recipients to recently receive the first-ever Relentless Agent Award by Century 21 Corporation. To her accomplishments, she received an invitation to attend this year’s ESPY awards (Excellence in Sports Performance Yearly Award) in Los Angeles. “I received this award based on the level of service that I provide to my clients,” she says.

Though Jenkins is a hardworking agent, listing and closing at record speed, it is her commitment to the community that keeps her grounded. She is an active volunteer with the Boling Spring Lakes Community Center, visiting and helping out seniors who’ve lost spouses or have families who live out of state. She has also partnered with Brunswick Christian Recovery Center in Ocean Isle Beach to open a center specifically for women struggling with addition. In the past six years she has volunteered at the local Habitat for Humanity Restore.

Of the Future 10 recognition, Jenkins says, “It’s very humbling and inspiring. It makes me want to reach out even more in my community.” 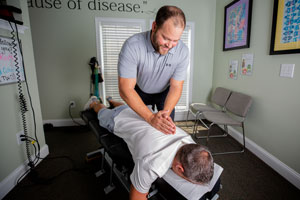 After starting his career as a plant manager for a plywood manufacturer, William McGowan knew that job wasn’t for him. Encouraged by a friend who is a chiropractor, McGowan decided it was time to switch career paths. “He told me how fulfilling it was, and he let me shadow him, and then I shadowed a few other doctors and I saw all of the positive things you can do for people,” McGowan says. And from there, a new purpose was born.

McGowan, who grew up in picturesque Rutherfordton, North Carolina, graduated with a degree in biology from Western Carolina University and went on to attend Life University in Atlanta, Georgia, where he earned his chiropractic doctorate degree. He also met fellow classmate Monique Weddle, who would become his wife, colleague and co-owner of Family First Health Center.

When the pair first graduated, they had to make a decision on where to start their careers. “We had a hard time deciding between the beauty of Colorado or family,” McGowan says. Weddle-McGowan is from Ocean Isle Beach, so they chose family and moved to Brunswick County.

Dr. Mac and Dr. Moe, as McGowan and Weddle-McGowan are known to their patients, are following their purpose by bringing holistic care, including adult and pediatric chiropractic, nutrition and deep-tissue laser therapy, to the community of Shallotte and surrounding areas.

“When you have those moments when you really helped someone feel relief from pain, and they give you the biggest hug you’ve ever had, that’s rewarding,” McGowan says.

“I’m happy that we’re providing a service to make people feel better,” McGowan adds. “And to be acknowledged as part of the Future 10 for that is a huge honor first and foremost. To me, it means that the people around you respect and appreciate you.”

When the McGowans aren’t busy helping clients feel better, they’re active members in South Brunswick Islands Rotary Club and Brunswick County Chamber of Commerce. And when they can, he and Moe head to Colorado to snowboard. 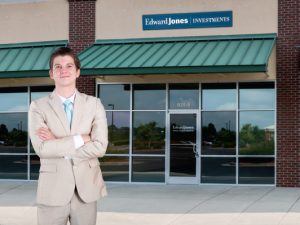 “I entertained other career ideas, but I knew in my heart of hearts what I would do,” Evan Potts says. “Being a financial advisor is where I find I can make an impact in people’s lives.” Potts recently opened his own Edward Jones branch in Sunset Beach. At just 25, he values helping people and small businesses achieve their financial goals. But then, he’s grown up in the field. “My dad is a financial advisor in Ohio. I just picked a different location to do it in.”

Potts grew up in a small town outside of Cleveland and graduated from Ohio University. He then moved to St. Louis, Missouri, where he trained extensively with Edward Jones before settling in Brunswick County. His family had always vacationed at Myrtle Beach, so he was already in love with the area. But he also recognized that something was missing in Sunset Beach: The town needed a financial advisor. Potts’ energy, drive and commitment to community are just the tools to help make his business a success.

“This community has already done a lot for me, and my goal is to do a lot for it in the long term,” he says.

Having grown up in a small town, he finds the strong sense of community in Brunswick County appealing. “It’s a support system, people caring about each other and where they live. Residents genuinely want to make their city better,” says Potts, who has become an active member of Brunswick County Chamber of Commerce and South Brunswick Islands Rotary Club.

He is excited about his future in Sunset Beach. When he isn’t working hard for his clients he spends time on the beach or in the park with his rescue dog. He also enjoys hiking the nature preserve, golfing and fishing, though he admits those activities are few and far between these days.

For his recognition in this year’s Future 10, Potts is “extremely excited to say the least. It’s an honor to be included, especially where my job is relationship-based. I don’t sell products, I sell myself.” 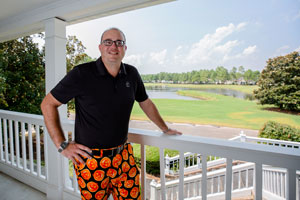 At the age of 16, the last thing Brett Skye Thomaswick was interested in was golf. Baseball and basketball were his sports of choice, so when his dad dragged him to a professional golf tournament to see Tiger Woods and Arnold Palmer, among other greats, he went “kicking and screaming,” determined to have a lousy time. But what we came away with was a new enthusiasm and a request to his dad for a set of golf clubs.

Twenty years later, Thomaswick is the PGA head golf professional at Sandpiper Bay Golf & Country Club, where he teaches others how to play the game, how to improve their game and how to love the game. For him, it’s not just about giving lessons. “I want people to actually enjoy golf,” he says. It’s also about the people. Thomaswick and his staff make it a priority to create an exceptional customer service experience. “We have over 100 members as well as locals and guests, and one of the things we do is learn everyone’s name,” he says. “I want us to always be on a first-name basis.”

Being recognized by the community as one of Brunswick County’s Future 10, Thomaswick says, is “an honor and one that I am appreciative of.” Helping people uncover or rediscover their love of golf means everything to him. “It validates what I’m doing and that I’m going the right direction in my career. I love helping people have a better day.”

Sandpiper Bay isn’t a private club, and Thomaswick makes it inviting even for those who’ve never played golf. He runs several clinics, including some just for ladies. He started a weekly Ladies’ Fun League in which he teaches participants to hit some shots and introduces some strategy. They started with five players, and now they’re up to 60. “All of them had never played before,” he says. “Golf can be difficult so we try to break down the walls so people feel comfortable. In the end, it’s all about having fun and keeping moving.” 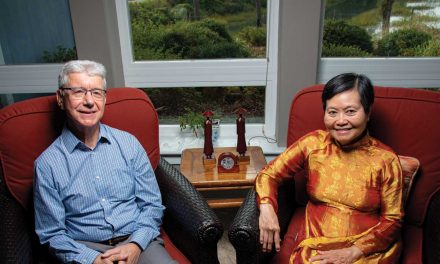 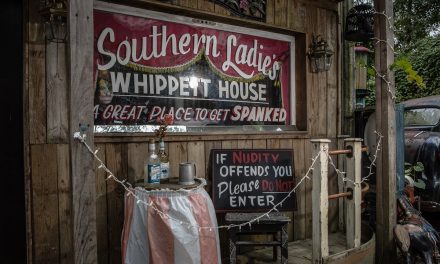