FootGolf: Medowlands Golf Club is the First Local Golf Course to Explore the Union of Soccer and Golf

There was a big wedding recently at the Meadowlands Golf Club in Calabash, the joining of soccer and golf. The union produced the new sports excitement known as FootGolf. Never heard of it? Let’s talk about it!

FootGolf is referred to as a crossover sport. The basic concept is to kick a soccer ball from the tee area on a golf course into an oversized hole to score. The game can be played with or without a golf cart with a maximum of four players per hole. It takes approximately two hours to play 18 holes.

The holes are shortened for play and incorporated into the existing golf holes. This is a great social game, but a strictly competitive format is also enjoyed by many. It is for players of all ages. 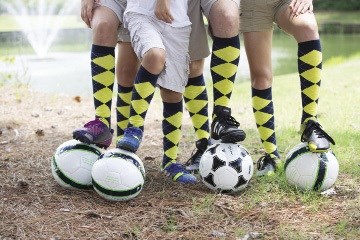 The American FootGolf League (AFGL) introduced the sport of FootGolf in North America in 2011. The league is a member of FIFG (Federation for International FootGolf), which regulates the game. The rules of play are very similar to rules of golf. The AFGL works with golf courses to enable them to bring the game to their clubs. For existing golf courses, there are many different methods to integrate FootGolf into their offerings. This creates increased revenue for their courses and also further develops the game itself.

The league also organizes tournaments throughout the country. There are presently more than 130 AFGL accredited courses in 31 states, and the game is played in 22 countries. The PGA has expressed strong support for the sport and considers it a positive overall for the game of golf. It is hoped that courses that have not yet considered adding it to their offerings will reconsider after learning of the PGA support.

The classic uniform for golf is required — collared shirts, golf-style pants, etc. Golf shoes with spikes and soccer cleats are prohibited. Argyle knee-high socks are preferred for official FootGolf tournaments organized by AFGL. Many players, however, also enjoy the argyle sock wearing as part of the humorous side of the sport and are competitive about their patterns. Another advantage for players is that they do not have to invest in a set of golf clubs. A No. 5 soccer ball is all that is needed — and your kicking leg!

A complete list of FootGolf courses by state is available on the AFGL website (http://www.FootGolf.net ). Rules of the game can also be found on the site. 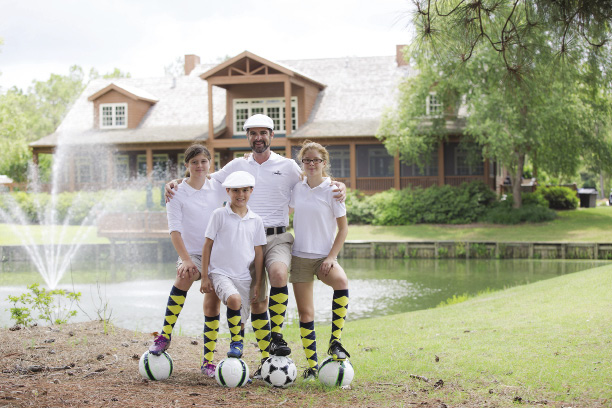 This is a sport that appeals to family groups, friends, organized groups and leagues. It is a unique idea for fundraising instead of the usual golf tournament. Consider it for birthday parties or an end-of-the-season party as well. It’s also something new for vacationers to try.

Meadowlands’ journey to FootGolf originated with Jason Monahan, general manager and head pro for both Meadowlands Golf Course and Farmstead Golf Links. He has had this vision for Meadowlands for approximately two years. His combined involvement with both sports as a youth soccer coach and as head pro at two golf courses gave him the background to go forward to design and create in a first-class way. He envisioned a positive revenue increase as well as putting his club solidly on the golf map. Golfers who might never have discovered Meadowlands now had an interesting reason to investigate and become part of an exciting new sport. During that time Monahan conscientiously researched every angle of this new sport, which was beginning to attract attention and create curiosity. He began serious work on this project in April 2014, with more intense research and responding to his main inspiration, his three children, ages 13, 10 and 8.

Monahan’s middle daughter was born hearing impaired. She has become, along with her two siblings, an avid FootGolf player, enjoying a sport in which her lack of hearing is not a handicap. Monahan feels strongly about the positive benefits of getting children away from their computers and other tools of technology and out into the fresh air for some good exercise. A round of FootGolf enables them to walk between 3,000 and 3,500 yards. He says the sport stimulates interaction, imagination, vision and the mind in general in many areas. Quality time with the family is also at the top of Monahan’s list of positives for total family involvement. He now repeatedly hears the request: “Dad, can we go out and play golf now?” 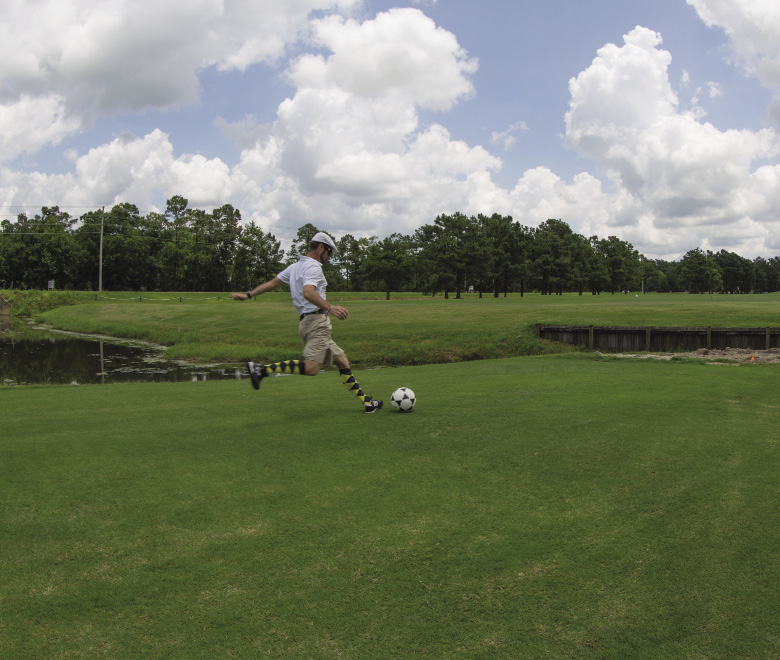 Critically important to Monahan is reassuring golfers that their regular golf game will not be threatened in any manner by FootGolf. Some drastic testing has been done to make sure of this for golfers. Nothing will be taken away from their product or devalue their game. The sports will coexist and will operate in a professional manner.

Monahan knows that the game will give far more than anyone expects. Once you have seen it played live, “it just all sinks in,” he says. Of course, the World Cup of soccer has helped create an interest in this new sport.

There has been increased television coverage recently regarding the growing interest in FootGolf, and Monahan has enjoyed positive support from neighbors and friends regarding his development of FootGolf, with comments such as “Greatest thing you’ve done; just awesome.”

Music to Monahan’s ears would be the following phone call: “Hello. I’m sorry to bother you today, but I’m planning our wedding and we’re wondering if we could possibly schedule a FootGolf theme wedding with your club?” Remember this all started with the wedding of soccer to golf. May they live happily ever after! 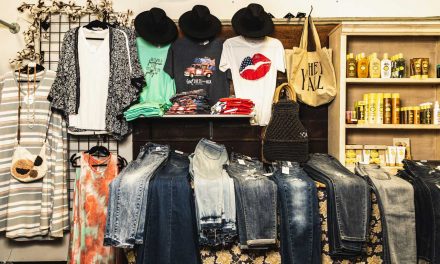 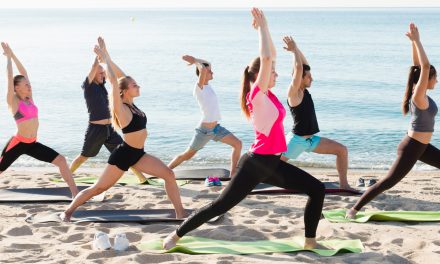 Are You Ready to Try Yoga? 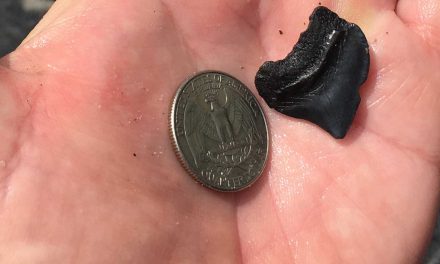