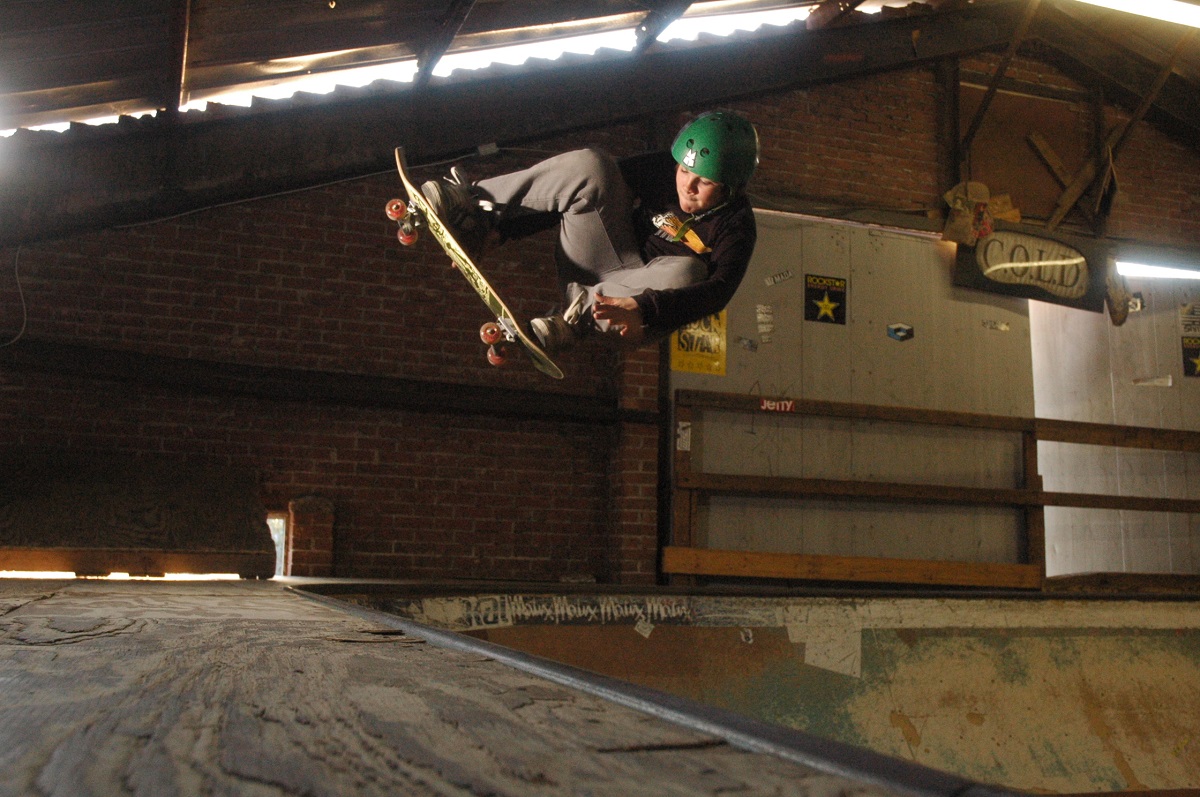 The luckiest kid in Hampstead is gliding a neat, noisy, vertical-horseshoe path on the half-pipe ramp in front of me. He appears to be about 11, only this mature look of blank intensity has stolen over him as he cruises back and around the six-foot structure on his skateboard. He’s surrounded by other kids, but seems to be alone, in the best possible way. It’s the incomparable happiness of deep concentration. What makes the kid fairly lucky is that he’s spending the afternoon here at The Skate Barn, one of the oldest, and some argue one of the best, skate parks in North Carolina, a place many of the skating faithful will travel good distances to reach.

What makes him the luckiest kid is that he lives here.

The kid’s house sits about 50 yards from The Skate Barn’s 6,000 square feet of skating surface. This summer, he and his family moved into the house that, until a couple of years ago, was inhabited by the man who runs The Skate Barn, a laid-back, bleached-haired guy named Jimmy Ellington.

Jimmy is one of those people who is always almost preternaturally relaxed. When I arrive, I park at his Doublewide Surf & Skate Shop that fronts the legendary skate park and walk back to the actual barn for which The Skate Barn was named. It is actually not a barn at all, but a renovated paper mill shed.

Jimmy Ellington is not waiting for me outside, where the Luckiest Kid is skating. So I go inside the shed, where I dodge a couple of the kids who are skating, performing tricks on the ramps and ledges and two bowls there. That’s when I see him. Drinking a Budweiser from a worn and much-beloved-looking coozy, Jimmy stands in the midst of the swarm, watching them as if in a trance himself. The kids zip past and around him, their skateboard wheels grinding along on the Skatelite flooring (a special warp-resistant laminate used by a number of reputable skate parks,) and I have to call his name three of four times — loud — to capture his attention.

Once I do, his demeanor shifts to one of affable focus, and we talk while Jimmy drives us around in a golf cart on a portion of the 20-some woodsy acres on which the skate park and store sit. It’s one of those achingly beautiful early fall days — sunny with a wild, cool wind — and every mother and son and group of teenagers who drives up, slows or stops to call out a Hello to Jimmy. Basically, riding around here in this golf cart with Jimmy Ellington is like cruising the most wicked hangout spot with the coolest kid in school. This afternoon, I am the luckiest writer.

There’s a surprising poetry to this place. Although the thrum of the boards-against-ramps is loud, and although there are clusters of adults and kids chatting here and there while watching the skaters, it’s mostly quiet. There’s no punk rock music playing or anything like that. It’s no den of teen iniquity at all, quite different from pop culture’s common conception of All Things Skaterly.

This has just occurred to me when, no kidding, a mother pulls up in a blue Mini and her five-year-old son hops out of the car.

“Hey!” she calls out to Jimmy, spotting him. Turns out the woman, dressed today in a pretty brown batik blouse and jeans, has been taking her son, Jack, here about every day since he started skating about three or four months ago. In that snapshot of time — a full epoch in the life of a five-year-old — Jack has become obsessed.

“And believe it or not,” she tells me, “he’s like, really, really good. He’s droppin’, and he’s just all over the place.” Like a lot of kids who come here, young Jack is absorbing the sport like a sponge, watching the moves of other kids and emulating them until he has them down.

“It’s a real cool thing,” says his mother. “And I have to admit: When I came to the skate park for the first time, I was kind of like, ‘Oh, boy. This is where my son’s gonna hang out for the next ten years.’ But now I just think it’s the coolest thing in the world.”

There are very few fights at The Skate Barn. This is amazing, when you consider that the bulk of its constituency is boys from ages 9 to 14. One kid, says Jimmy, was so nervous when he started coming a few years back that he threw up when he had to introduce himself at a Barn-sponsored skate camp. “And now, that same kid, he’s about 14, he just got off the Dew Tour, he was so good. That social anxiety,” Jimmy claps his hands, “gone.” Jimmy says the nervous kid’s mother had been told to put him on Ritalin; now the nerves are not even an issue.

Jack’s mother follows Jack inside the barn to supervise, and as we continue cruising around in the golf cart, I see her talking animatedly with other Skate Barn parents here basking in this perfect afternoon. (There are adults who skate here, too, including a 43-year-old man named Charles who shows up in a leopard-print helmet, but most customers are significantly younger.)

Jimmy’s cousin started The Skate Barn in 1993. Back then, it was called The Middle School. It had been years since Jimmy had stood on a board when he stopped by the see the place one day. “And when I did, I just fell in love with riding again.” He bought the place from his cousin in 1996 and renamed it. He was 24. “I really didn’t look at it like, ‘This is what I’m gonna do for the next 15 years. This is just something for fun, let’s do it, and yeah, we’re gonna make a little money doing it.’”

Now, at 36, with a wife and a three year old, his attitude has become more businesslike. He’s started his store, the Doublewide Skate Shop with its two locations (here in Hampstead and now there’s one on Front Street in Wilmington) to cater to skaters and those who just want to dress themselves to look as cool as skaters. And both of these businesses — The Skate Barn and the shop — have become the hub of skate culture in the region, with a wildly popular Skate Camp for kids in the summer, contests in the fall and spring, and the Tri-Town Showdown, a granddaddy of a contest involving the area’s three skate parks, scheduled for November.

And then there was the demonstration at 2008’s Azalea Festival, for which Jimmy built a half-pipe that was 40 feet wide and six feet high. The thing was huge, literally — it took two tractor-trailers to haul it across the river — and also huge in terms of its crowd-pleasing popularity and as a signifier of Jimmy Ellington’s ambitions.

Anytime he gets the opportunity to do something, he wants to do it bigger and better. He’s constantly thinking of new ideas for The Skate Barn. Twice a year, they refurbish all the ramps and add to them. And events like Azalea Festival are opportunities to get the word out about his shops, since it is those stores that fuel all that the skate park is able to do.

“I mean, kids need stuff to do,” he says. “We’re always telling ’em, ‘Don’t do this, don’t do this.’ What on earth do they do? Play videogames? I’m sorry, no. It’s very important that we provide what we can for the kids, because they’re our future, and the more outlets we give them, the more creativity they’re gonna be armed with, and I think that this is the great purpose.” He pauses, and looks out at the sun settling itself behind the trees. “And that’s why I can’t walk away from this.”

The poetry of skateboarding lies in its unscripted nature. Jimmy says: “In this sport, it’s just: Get on your board and ride. Do 360s or kick it up and flip it in the air. The creativity there is a great release. If your kid goes to school and won’t listen and they want to put him on Ritalin, maybe he needs something else. And then, when he goes back to the schoolwork, he might actually have a clear picture of what he’s trying to focus on.”

He says all of this, by the way, while directing our golf cart in spontaneous loops through the grass. He parks, we talk, then he starts up again and reverses direction and talks some more. He’s got plans for The Skate Barn’s future: more festivals like the Tri-Town Showdown, and down the road, perhaps a more paved and polished look to the park itself. But the best part is that, after more than a decade, the heart of the Cape Fear skating community is still a labor of love.

“I got into it because I cared about it, and now I’m creating my business as I go along,” he says, as he steers our golf cart into the sunset. “And it’s a good thing. I’m blessed to be here. Very blessed.” 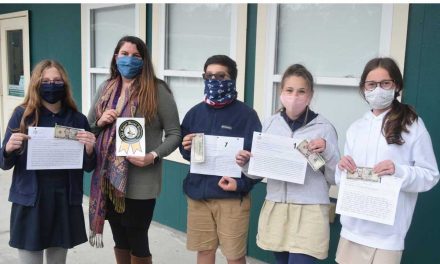 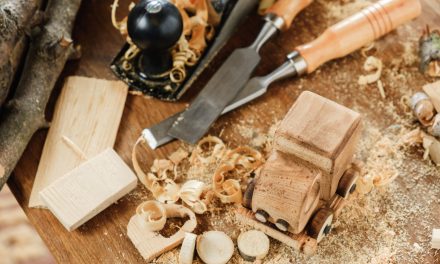 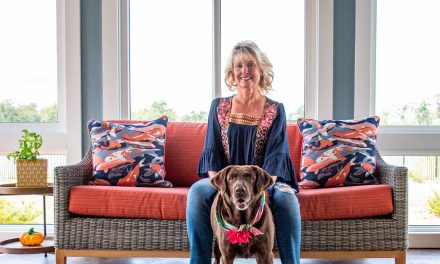 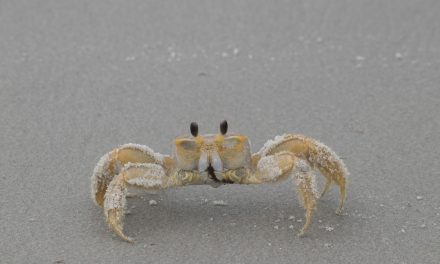 Have You Ever Heard of Ghost Crab Hunting?