It is a Rifle Range Target Pit and Storage area! This historic area was built in 1918 so that armed soldiers who were several hundred yards away could shoot at targets north of the structure, practicing marksmanship before being shipped to Europe. Today, thanks to the hard work of dedicated volunteers, this area is part of the Fort Caswell Historic District.

The story of preserving the Rifle Pit and Storage Area began on a beautiful fall day back in 2011, when members of the Caswell Dunes Neighborhood Landscape Committee came upon a structure covered in weeds and tree limbs and dirt. They could not immediately identify the structure, but it piqued their curiosity.

McKee immediately met with the landscape committee to view the structure. About a week or so later, he gave them information on its historical nature. He had already identified it as a KD (Known Distance) target pit and storage area that was built in 1918 for use in World War I for military target practice, and as an extension of Fort Caswell.

McKee then advised the Landscape Committee to clean the soil off the floor, as well as remove vines, small trees, etc. He said that he would seek advice from the State Historic Preservation Office in Raleigh and soon after scheduled their visit to the site. The group included historians, engineers, lawyers and others who make the determination of which North Carolina places will be listed on the National List of Historic Places.

After inspecting the site, it was advised that precautions should be taken immediately to protect the site because of large cracks in the Pit’s doorways (lintels) and center wall, trying to avoid collapse.

Norma and her husband, Ron Eckard, were then appointed by the Board of Directors of the Caswell Dunes Homeowners Association to chair a Special Interests Group to handle the preservation of this important historical project. The Eckards presented progress updates at each board meeting. The Mayor of Caswell Beach Town and the Town Administrator advised them to seek a non-profit status, as a 501(C) (3) would be advantageous in securing funds. They soon became the Friends of Fort Caswell Rifle Range, Inc.

Norma says, “We were soon notified by state officials that a proposal was being written to place the Fort on the Natural List of Historic Places and that the Rifle Pit fit into that piece of history because it was once owned by Fort Caswell. The rifle range was sold after World War II to the N. C. Baptist State Convention. Funds were raised by the Special Interest Group to pay for submission of the proposal by the state.”

In 2013, there were big smiles all over Caswell Dunes. Their hard work had paid off. They received word that the Rifle Range would be considered as a dis-contiguous part of the Fort Caswell Historic District.

The Fort Caswell Historic District occupies a 760-acre area at the tip of a peninsula on the southeastern end of Oak Island in Brunswick County, including a .50 nautical mile extension east into the Cape Fear River and south into the Atlantic Ocean.

The engineering study has now been completed and recommendations made to straighten the center wall at a cost of $20,000 or more.  To repair the lintels, patch and seal the walls the cost goes much higher.

In May 2016, the rifle range landed on the Historic Wilmington Foundation’s “Most Threatened Historic Places” list. This inclusion will possibly help raise the public profile but it also signifies that there is a lot of work to do.

Jim McKee sums the preservation effort up with his remarks, “We’re coming up on the centennial of our involvement in World War I. To have something tangible that we know was used to prepare our Troops – it’s important.”

You can find out information and follow the progress of this important preservation project by visiting www.caswellriflerange.com. 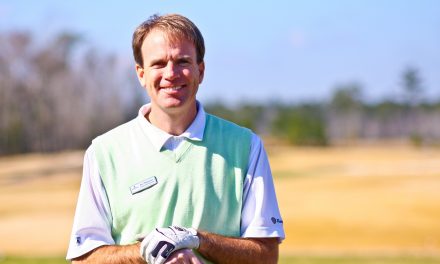