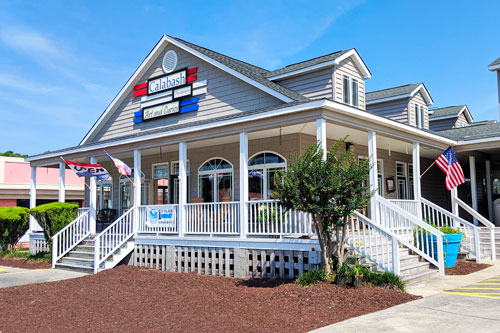 When she was about 11 or 12, Suzy Moore King’s father, Richard, brought home a Polaroid camera from an auction in Cherry Grove. Intrigued, she headed for the flower garden at her Calabash home. Even then she realized Polaroid film was expensive, but she was hooked.

Her interest in photography continued through high school, and after graduation she headed for the Art Institute of Atlanta, where she studied the fine points of photography. “It took you from learning how to use the camera to developing film and printing,” she says. “I really enjoyed the lab work.” She also studied fashion and architecture as they relate to photography and commercial art. Plans to live and work in Atlanta changed when her father died.

Thirty-seven years after opening her first photography studio in Calabash, Suzy and her husband, Forrest King, have opened Calabash Photography Art and Curios in a 3,200-square-foot space they own in Harbor Court on Calabash’s main drive. Their previous studio, just a few feet away, saw the beginning of the expansion into retail art, but this new space allows them to bring in more artists and more diversity of product. They’ve applied for a license that will allow them to sell wine. “Art and wine; they go together,” Suzy says.

For years the photography business focused on family portraits, weddings and a few commercial clients. After adding onto the old studio in 2006, they decided to take some of their images and put them on canvas or boards to sell. “We knew a couple of artists, and they asked us if they could bring work in. It started small,” Suzy says.

When Novant moved from Harbor Court’s largest rental space, Suzy and Forrest decided to renovate it for their own use. Forrest did all of the work himself, including building the wine bar.

The move took several days, and they’re still unpacking. “We probably have 45 artists and vendors doing a variety of work: wood, repurposed furniture, jewelry, literary works, candles paintings, pottery and all price points,” Suzy says. “One artist makes furniture from wood taken from the Liberty Ships where many Brunswick County natives worked in the 1930s and ‘40s. We wanted to cater to locals and visitors who want something locally made to take home with them.”

Maybe being local is the centerpiece of their business. Forrest grew up in Kingtown, where his father was raised. His mother, from Shelby, met her future husband working at the shipyard in Wilmington. Suzy, however, grew up in downtown Calabash surrounded by extended family.

Her grandmother, Amanda Hewett, married Joseph Carl High from Columbus County. They lived in Little River Neck where he worked at a mill until he was killed on the job. Amanda moved her young family, including Suzy’s mother, Kathleen, to Calabash. Of her five children, four would open some of the first Calabash-style seafood restaurants. Kathleen High Moore owned and operated a general store in downtown Calabash while her husband worked on shrimp boats and as a plumber, Suzy says. 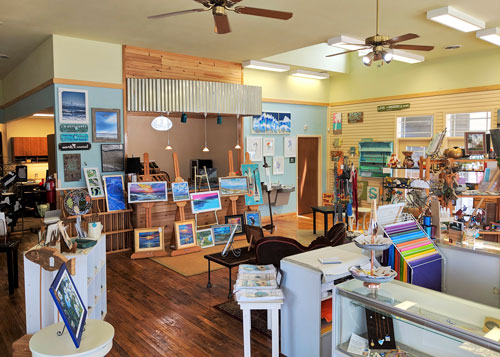 Suzy’s uncle, Ivey High, also had a store where Grapevine Restaurant currently sits. “She ran his store when he was in the Navy,” Suzy says of her mother. Later, about 1960, he converted it to a seafood restaurant.

“Back then, everybody lived by their business,” Suzy says. “Our house was beside the store, which sat where Harbor Court is now. My grandmother lived on River Road between the present-day Boundary House and Callahan’s.” She recalls having wells and pumps that had to be maintained for a long time before municipal services were installed. “My father being a plumber, it was like the shoemaker. We never got our plumbing fixed,” she quips.

Many of the old houses have long since given way to modern businesses. The Kings’ home on River Road belonged to her aunt, Ruth High Beck, who owned Beck’s Restaurant along with her husband, Vester Beck.

Having worked in the family’s businesses, Suzy knew that wasn’t for her. In 1982 Kathleen built a 1,200-square-foot building on the main street of Calabash. She rented out one side, and Suzy opened a photography studio in the other.

She had been working for the late Steve Smith at his seven-day film processing facility in Myrtle Beach because she liked the dark room work. Between Steve and another employee, Suzy gained valuable experience that made her confident she could succeed on her own.

It was about the same time that Steve introduced her to Forrest. “At that time, I was doing a lot of weddings so every Saturday I was working. I told him if he wanted to go on a date, he would have to go to a wedding. I put a camera in his hand, and he liked it. He’d wear a coat and tie. That was more of our dates, a wedding every weekend.”

King has also worked as a tax appraiser for Brunswick County, but when the couple began their family, he joined Suzy full time in the photography business. “One of us could take the kids to school and the other could open the shop,” she says. “Forrest shoots, but he really got into Photoshop® when digital came about. He likes working on the computer. I was always taught that you get it in the camera.” He’s become known for his restoration work as well.

Fans of Forensic Files know Forrest as the man who chased two bank robbers from Calabash to Wampee in the early 1990s. Suzy explains that Forrest and his dog were at the bank when two guys with stockings over their heads ran out of the bank. He followed them all the way to Wampee, stopping only when they turned down a dirt road that led to a gravel pit.

“Meantime, I’m at the store and the phone rings. It’s Forrest telling me he’s chased bank robbers. I didn’t believe him at first.”

The suspects turned out to be two North Myrtle Beach police officers, so Forensic Files found it to be a good story line. “They interviewed the whole county around here,” Suzy says. “They came in the studio and set up cameras and lights.” Replays of the episode happen fairly frequently, she says, and someone inevitably calls Forrest about it.

That kind of excitement doesn’t happen much around Calabash, but the expansion of their business is exciting to the Kings. They see it as being good for downtown, where Forrest is active in the Merchants Association, which manages the town’s summer concert series and a June car show. Suzy also stays active with civic responsibilities. She’s been a member of the South Brunswick Rotary Club for 31 years and the Calabash ABC Board for 35. She’s a long-time member of the Long Bay Garden Club. In the summer, she plays the costumed Josh the Otter in a kindergarten swim program at BCC’s Dinah E. Gore Fitness & Aquatics Center.

They’re anxious to welcome locals and visitors to their new location. They’ll be open 9 am to 5 pm Monday through Saturday. Stay tuned for word on an opening reception with the artists and for wine-tasting events. 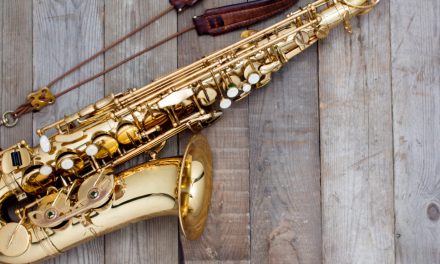