Brad Carter in Shallotte and his Crud Crusher 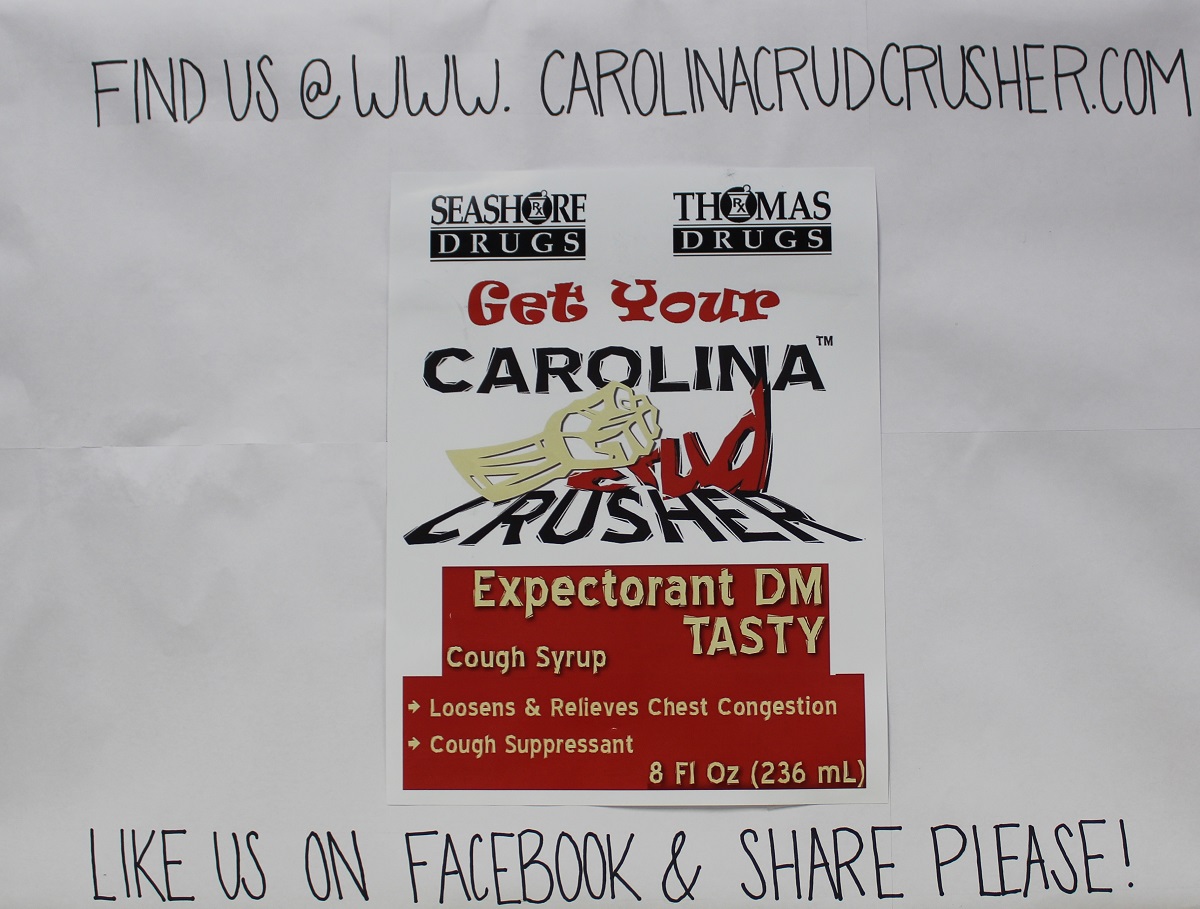 The common cold has plagued the human race for centuries, but Brad Carter, a pharmacist at Thomas Drugs in Shallotte, has a solution: Carolina Crud Crusher. Carter developed this cough syrup and over the years, especially during a rough 2018 cold and flu season, the pharmacy has increased its sales of the 8-ounce bottle of cough syrup to about 5,000 bottles each month through the tough months.

“We never advertise,” Carter says. “It’s all word of mouth.”

Three years ago this miracle liquid became available over-the-counter at the four Thomas-owned pharmacies: Thomas Drugs in Shallotte and Oak Island; Seashore Drugs in Calabash and in Little River. It is also available online and is shipped to all 50 states and the U.S. territories. About 200 North Carolina and South Carolina physicians write prescriptions for it. Carter is working on having it qualify for international sales. “We have a product unique to this area,” he says. 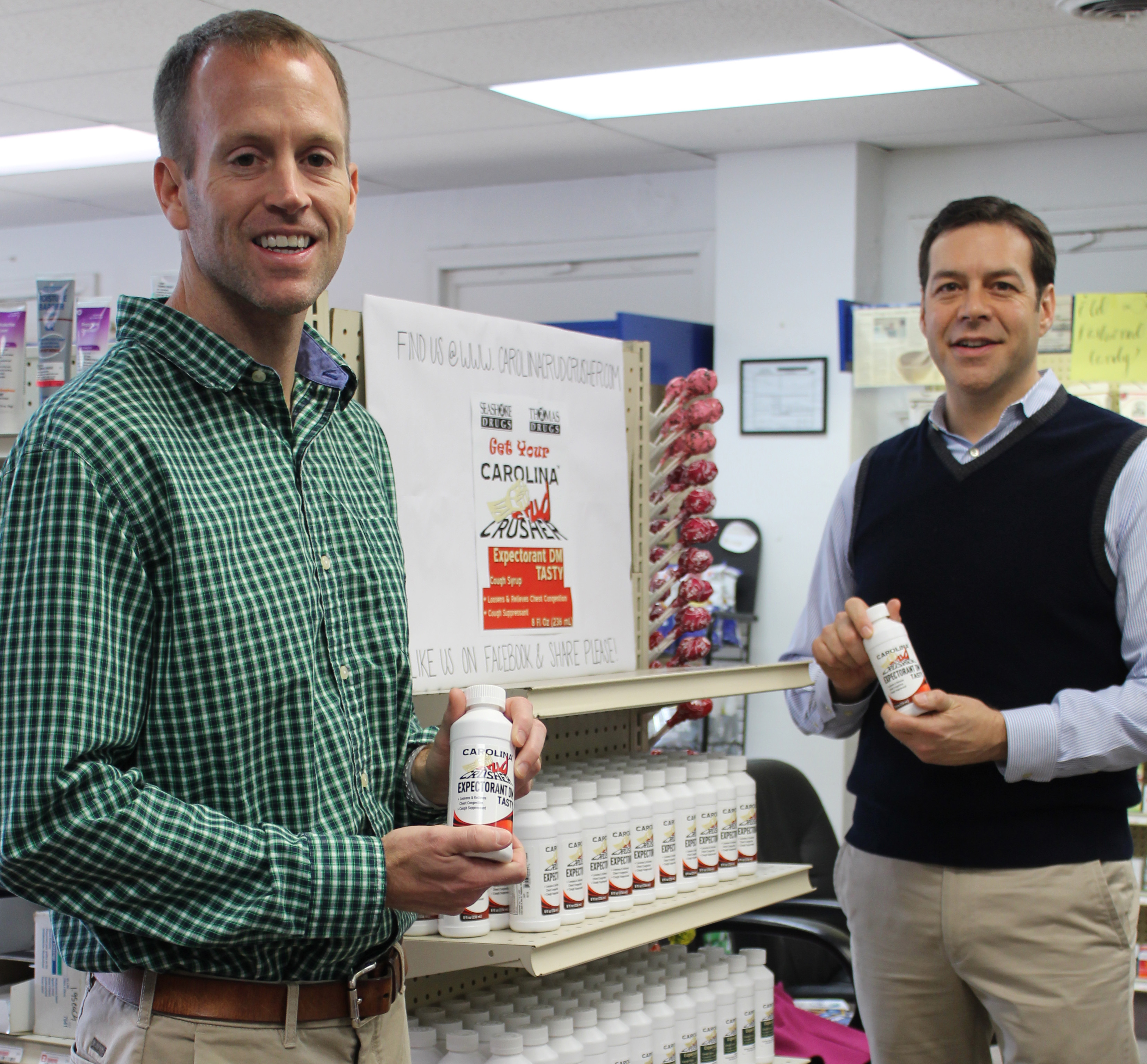 PHOTOGRAPHY BY Jo Ann Mathews.  Brad Carter (left) and Ed Thomas each hold a bottle of Carolina Crud Crusher, a product Brad developed and named. “It was the perfect name and it sounded good,” he says.

The medicine was a long time in coming. Carter, 39, began working on it as a student at Medical College of Virginia (now Virginia Commonwealth University) School of Pharmacy in Richmond. He explains that when people would come to the pharmacy where he worked looking for something to relieve their cough and congestion, he’d ask for specifics about the condition.

“You start thinking about how to make changes,” he says. “Ideas pop up. The driving force is listening to the needs of your patients.” Carter would experiment with different solutions and apply what he believed would work.

Then it happened that he came down with a cold himself 12 years ago and needed relief.

“I was the first guinea pig,” he says. He felt confident with the results. When a doctor called about three years later and asked if Carter had a cure for what was ailing so many people, “I seized the moment,” Carter recalls. “I said, ‘I have it.’”

He knew his new crud crusher was successful when, after the first week a doctor wrote the prescription, nearly two dozen people were “raving” about it. “I knew it worked,” he says.

But he credits Ed Thomas, owner of Thomas Drugs along with matriarch Sandra Thomas, for increased sales.

“Ed was the motivation, the driving force behind getting [Carolina Crud Crusher] over the counter,” he says. “Ed and Sandra are like family to me. They are supportive of me and one hundred percent on board. I am lucky to have them in my life.” 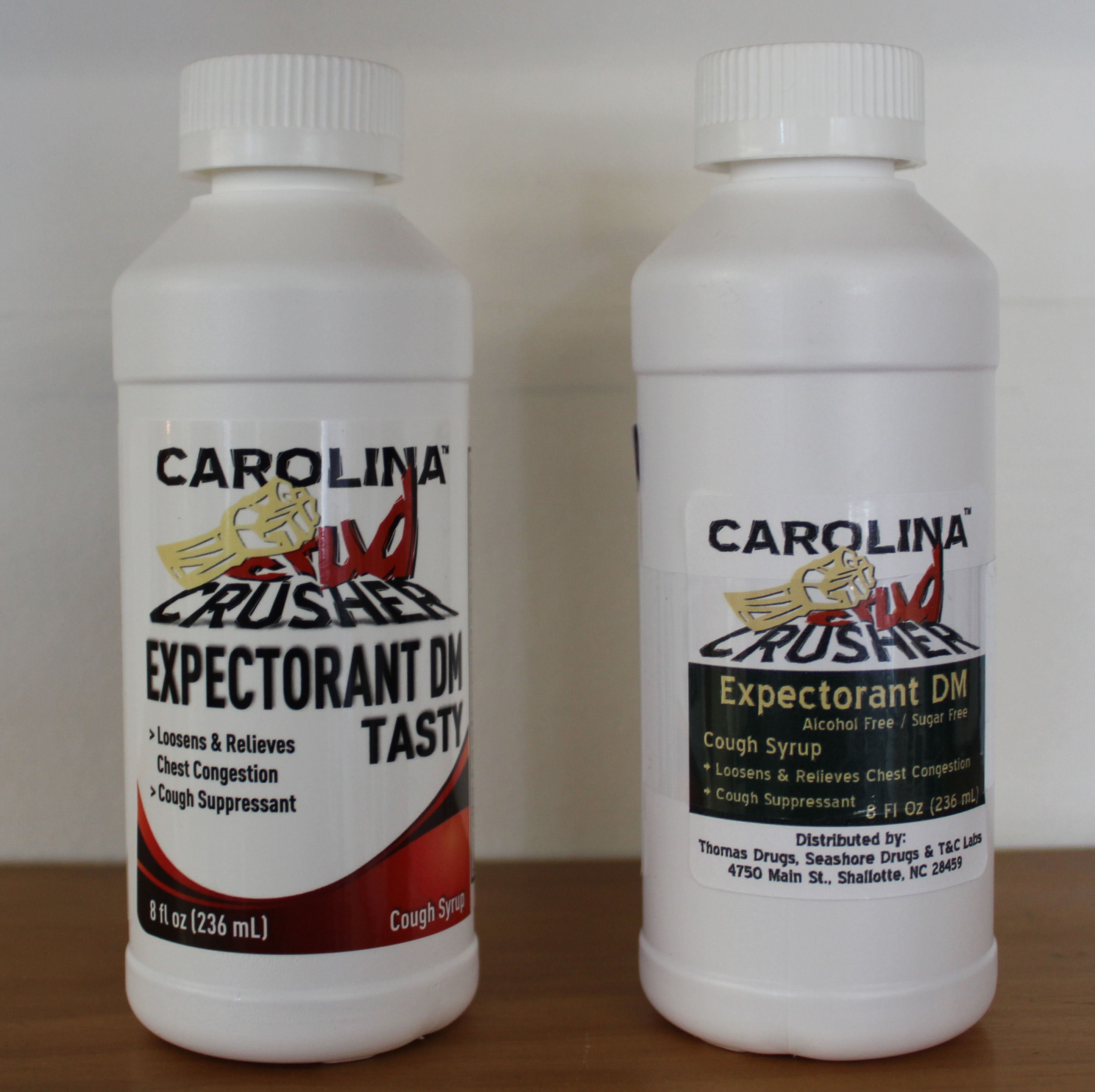 How did Carter come up with the name?

He explained he was visiting his family at their farm in Pipestem, WV where he grew up. “It just came out,” he says. “It was the perfect name, and it sounded good.”

Carter said growing up he wanted to be an athlete but with ties to the medical profession. He ran track and cross country at Marshall University where he majored in biology and minored in chemistry. After graduation, he coached at Concord University in Athens, WV, but his family “nagged me to go to pharmacy school,” he says, adding that his brother, Brent, was in pharmacy school then. “Pharmacy just happened [to me]. I love being a pharmacist. I’m one hundred percent confident this is what I’m to do.”

Carter and his wife, Courtney, make their home in Brunswick Forest. “[Courtney] is a full-time mom and supportive wife,” Carter says. Their son Ben, turns seven in May and says he wants to be a pharmacist. Their daughter Silvia, 2, is also showing interest in the field. The couple will have to wait a few years for son Steed, born September 2017, to voice his career preference.

Ed, Carter’s business partner with Carolina Crud Crusher, is a fourth generation pharmacist. His grandfather opened Thomas Drugs in Shallotte in 1965. Ed, 46, says he always wanted to be a pharmacist and received his pharmacy degree from Campbell University. Of his four children, Edward, 17, and John, 15, show an interest. Preston, 21, is majoring in business and Russian at University of South Carolina while Katya, 18, is majoring in environmental science at University of Colorado. His wife, Natasha, is a physician.

At Thomas Drugs in Shallotte one day this winter, a steady stream of people enter and all ask about Carolina Crud Crusher.

“I have the flu,” says Charlie Rose of Ocean Isle Beach as he pulls at the mask covering his mouth. He explains he’s picking up a prescription for sinusitis, but he added four bottles of Carolina Crud Crusher to his purchase. 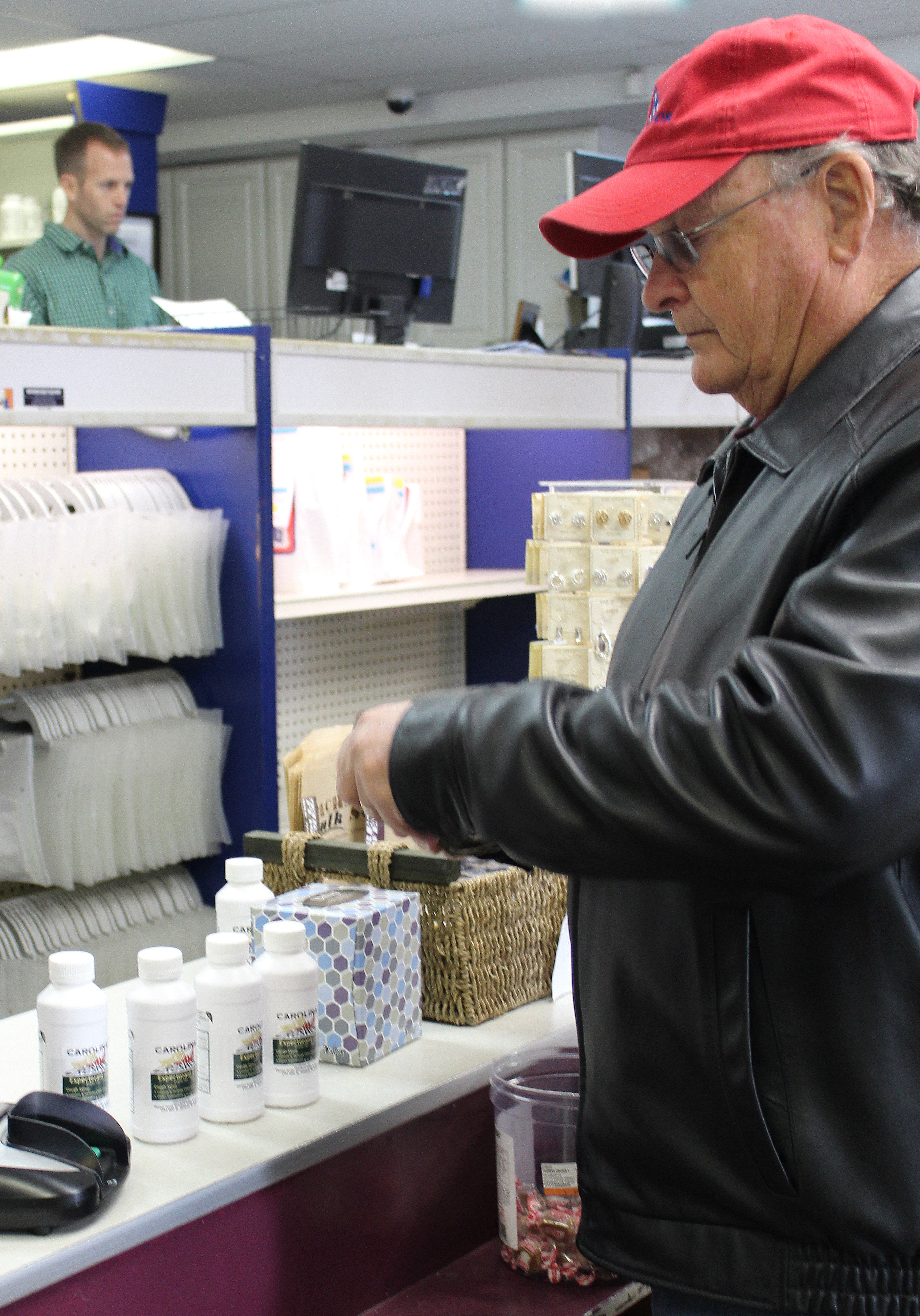 “I have a lingering cold that flared up,” says Don Ward of Longwood. He lifts a bottle of Crud Crusher. “Maybe this stuff will break it all up. If this works, I’ll shout it from the rooftops.”

He bought four bottles of the sugar-free Crusher with family and a friend in mind, then came back a few days later and bought four more bottles. “It did work,” he says. “By the end of the [first] day, I had no sniffles. I could breathe. I felt my sinuses clear up.”

Thomas Drugs cashier Summer Little says at least 50 people a day ask about Carolina Crud Crusher. “They want to know what it is,” she says. She took it herself a year ago. “It worked pretty quickly,” she says.

“It’s been a freight train,” Carter says of the popularity of his formula. “It’s all about word of mouth.”

He is now working on developing a pain cream and a medication for yellow toenails, but his focus is on Carolina Crud Crusher. “We wanted the common person to walk in and get it,” he says. “We’re getting tons of comments on Facebook.” 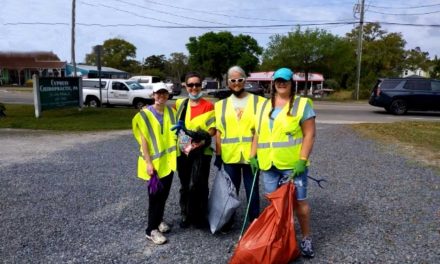 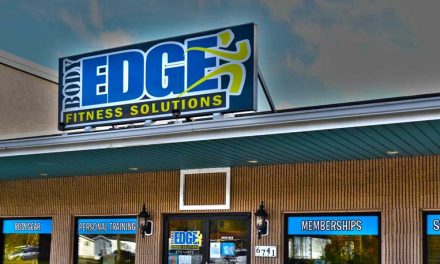 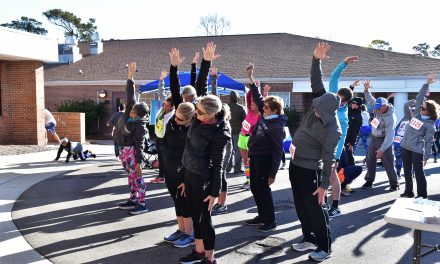 Exercise is the Key to Healthy Aging