Bargaining with Orchids and Other Flowery Tales

In July of 2003 St. James resident Jan Denney made a bargain with her husband’s 52 orchids. Luckily for them and for her, she won.

Here’s how she tells the story.

Denney and her husband, Dave, retired to their custom-built home, complete with a 10-by-16 foot plant room for Dave’s orchids.

“He was the ag person,” says Denney. “He grew up on a farm, he worked for the agricultural division of DuPont, and he planned on growing orchids when he retired. Plants were his thing, not mine.”

But it didn’t work out at all the way they had planned it. 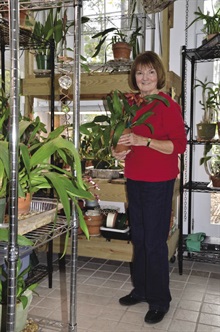 Three years after moving into their new home, Dave had a heart attack and died very suddenly. And among all the other decisions a new widow has to make, Denney had to decide what to do with 52 orchids. She stared at them, and finally she said, “Okay, here’s the deal. I’ll water you for one year, and if, at the end of that time, you are still alive, we’ll see where we go from there.”

One year later, the orchids were thriving and Denney was hooked. Somewhere along the line, she met Master Gardener Arlene Hubner and the two became good friends. Hubner recalls, “She dragged me to an orchid auction at a Cape Fear Orchid Society meeting, and that was my downfall. I bought raffle tickets, and I won!”

Neither of the women could have predicted then that one day they would join forces to become a much-sought-after orchid presentation team.

It started when someone in the Boiling Spring Lakes garden club asked Hubner to give an orchid presentation to their membership. She agreed, but only if Denney would do it with her.

To date, the Denney/Hubner show has been presented about 15 times to orchid organizations and garden clubs across Brunswick County. Their popularity as speakers is due not only to their orchid-growing expertise, but also to their very amusing presentation. It’s definitely a “laugh while you learn” experience for the audience.

The show always begins with Denney’s very funny monologue about her conversation with those original 52 orchids, and her admission that she wasn’t sure whether they were a legacy or a punishment. She goes on to introduce their show by saying that she and Hubner have their own definition of a PowerPoint presentation. “She’s power and I’m point,” Denney explains as she points to their easel and flip chart.

The next several minutes are serious. The audience is reminded that orchids are the second largest flowering family, that they grow nearly everywhere and that there are 35,000 identified species and at least 120,000 hybrids. They are exotic but tough. Delicate but resilient. And, many would say, totally addictive. The bloom lasts three to four months, which at somewhere between $10 and $30 a plant, makes them more economical than cut flowers. The trick, of course, is to resuscitate them after they die, and to get them to bloom again. That is where the ladies’ experience and expertise come into play.

The next “slides” (actually flip chart pages) inform the group of how to achieve the correct amount of watering, light, temperature, humidity and air. They provide some very precise guidelines because there really isn’t much wiggle room here. The most frequent mistake that novices make, both women agree, is over-watering the plants. But then Hubner adds, “Actually over anything-ing — over-fertilizing, too much light, etc.” 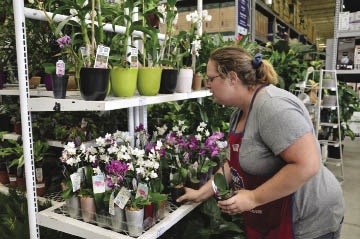 Finally, the women give a dissertation on combating and controlling problems with aphids, mealy bugs and spider mites. At this point, Denney lightens up the discussion a bit with her personal story of how one year an anole crept into her orchid room and that year she had no problems with insects. Obviously the anole stumbled on a veritable feast, and Denney had a solution to her pest problem. At one presentation, it was suggested that she put an anole in her orchid room every year. Whereupon Denney agreed that while that would be a good idea, it would first require catching one, and she hasn’t figured out how to do that yet without smothering it under a towel. They then get back to the serious business of chasing off pests with rubbing alcohol, insecticidal soap or neem oil. This is a good lead-in to the treatment of common plant diseases.

Sometimes their presentation goes into some detail about the sex life of an orchid. To summarize, in the world of orchids, each plant has both sex organs, making fertilization easy, but it’s often misleading for the pollinator. It seems that the business end of some plants looks like a moth, so the poor moth trudges up the “pollinator runway” in anticipation of a hot night, only to find when he reaches his destination that he isn’t making contact with another of his species after all. And it turns out to be just another failed night on the town. This is probably not useful information, but it is certainly entertaining.

The next segment of their talk deals with what to look for when you buy an orchid. According to an estimate from the American Orchid Society, 75 percent of all orchids sold are Phalaenopsis. And according to Denney and Hubner, they are the easiest to grow, and the least likely to expire prematurely. When selecting a plant, they advise you to look for one with vibrant foliage, plump roots and pseudo-bulbs, drain holes and fresh-smelling potting medium. And they caution you to check under the leaves for unwanted hitch-hikers.

Phalaenopsis, as well as Dendrobiums, can be found at Lowe’s stores pretty much all year. If you visit the Southport Lowe’s and want some help, ask for Heather Robertson. She is their resident expert on all things botanical. When asked why so many people buy orchids, she says, “People are fascinated by them. They just have a magical effect on people. All orchids are fairly easy to take care of.” But then she backs off and admits they are “definitely a trial and error type of plant.”

In the interests of full disclosure, it should be stated that Denney now has 111 orchid plants, but she has killed about 50 (or watched them commit suicide, as the women prefer to put it). Hubner has about 50 plants and admits to having witnessed the demise of almost as many.

Both women are members of the Cape Fear Orchid Society (CFOS) and are consistently in the top 10 listing of accumulated Members’ Show Table points for monthly competitions.

The Cape Fear Orchid Society meets the second Wednesday of the month at the Arboretum in Wilmington. At each meeting there is a speaker, and members can bring plants to display on a “Show Table.” Members are invited to view the plants and vote on the one that they find most pleasing. The winners get their name and picture in the next CFOS newsletter. Guests are always welcome. For more information about the CFOS, you can visit their Website at
www.capefearorchid.org.

If your club or organization would like the Denney/Hubner orchid ladies to inform/entertain your group, they would be happy to do so. There is no charge, not even an amusement tax. You can email them at cfosorchidsnc@gmail.com . 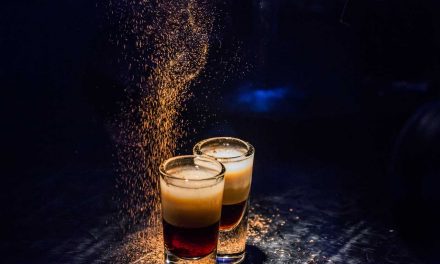 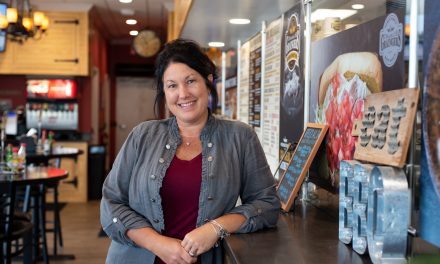