Wild Tide Lacrosse offers for boys and girls in grades 8 through 12 the chance to build confidence and have fun.

Sticks up! Head on a swivel! Look for your options! Take the lane!

That’s lacrosse speak. And well understood by the players, parents and fans of Wild Tide Lacrosse in Brunswick County.

Wild Tide is a youth travel lacrosse organization for boys and girls in grades 8 through12. Started in 2018, the program was the collective idea of Brunswick County parents and players who wanted to grow the sport. Wild Tide is part of the Brunswick County Youth Council, a 501(c)(3) nonprofit formed by Steve Corbett and funded through sponsors, fundraising, scholarships and grants.

According to Anne Dotson, director of Wild Tide, “It was important to us to be able to provide financially feasible opportunities to the youth in our county.” Wild Tide has two teams, one for boys and one for girls, with 25 players maximum on each team.

“We went through a lot of possibilities when naming our team,” Dotson says. “It was a wild two-month ride getting to where we are today. It took incredible teamwork, parent support and community sponsorships. Wild Tide fit us best.” 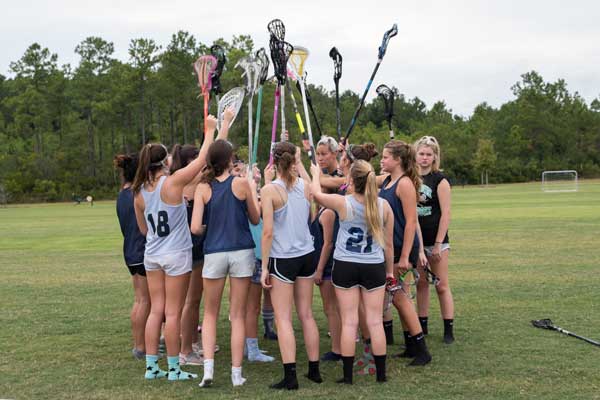 According to Wikipedia, lacrosse is one of the fastest growing sports in America. Dotson says, “There are many programs being added in colleges, particularly in the South, which presents a great vehicle for our athletes to pay for college. Lacrosse is fairly new in our area, so it provides an equal playing ground for kids to learn together. And it’s fun to play and watch.”

The teams practice twice each week under coaches Rebecca Allen and Dale Oehler at Ocean Isle Beach Park. Practices prepare them for tournament play against teams from all over the South. This season, Wild Tide will play in North Carolina, South Carolina and Georgia.

Allen, who grew up in Maryland, played Olympic developmental soccer and premier travel lacrosse in high school and college. Ever since, she has been coaching both sports, including the women’s team at West Brunswick High School. Prior to moving to Brunswick County, Allen coached men and women’s high school soccer in Asheville, North Carolina. She also played traditional Native American stickball, the origins of lacrosse, on an all Native American women’s team in Cherokee, North Carolina.

“Stickball was played by many American Indian tribes and has always been near and dear to my heart because I am of Choctaw descent,” Allen says. “It’s in my blood.” 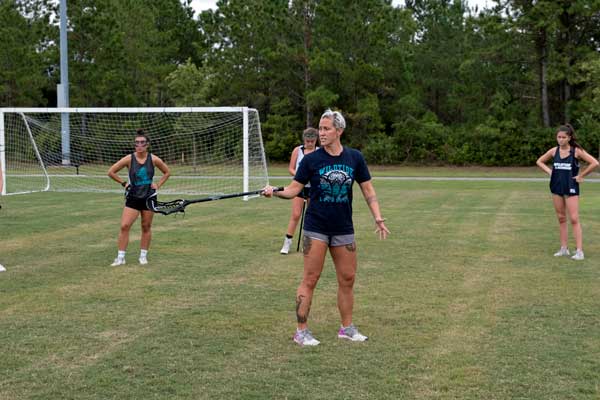 Allen, who has been in law enforcement for 20 years, recognizes the positive impact of lacrosse on young girls in Brunswick County. “Lacrosse is an opportunity to empower the next generation of strong women in this community,” she says. “If we can teach the young generation of women to support each other, we will be better off in the long run. There is no better way than through sports.”

Oehler, known as “Coach 0,” joined the Wild Tide coaching staff last year after moving from New Jersey. Like Allen, his list of credentials is impressive. He played lacrosse in high school and college, coached high school teams and founded elite-level and all-star tournament clubs. He is actively involved with U.S. Lacrosse, the national governing body of men’s and women’s lacrosse. He currently coaches men’s lacrosse at South Brunswick High School.

Oehler’s players call him GOAT, a reference to Greatest of All Time. Oehler loves coaching at the high school level where there is exposure to college scouts and ultimately scholarships. He encourages the players to become better individual players while contributing to the team’s success, developing friendships and having fun. Oehler, similar to Allen, shares an even bigger purpose. “I want my players to learn how to honor the game that North American Indian tribes called the Creator’s Game,” he says. “I tell my players to honor it and themselves as young men.”

Dotson feels lucky to have both Allen and Oehler as coaches. 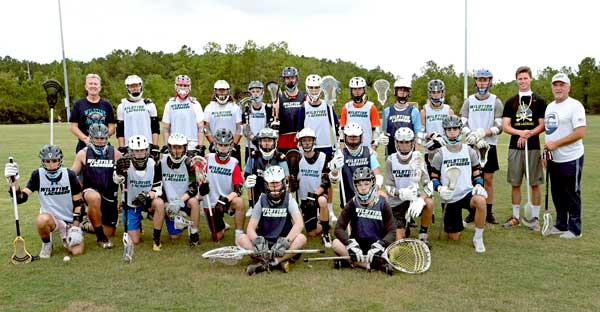 “Rebecca practices what she preaches and is an amazing role model for our female athletes,” Dotson says. “Dale is an amazing coach, and the boys absolutely love him. He gets right in there with them at practice. Both work hard to instill fair play and respect. Both encourage players to work on developing skill plus lacrosse IQ.”

COVID-19 has added player restrictions including screenings before every practice, use of hand sanitizer, maintaining separate spaces for personal belongings, and individual clearly marked water bottles brought from home. Even drills have been altered to minimize contact.

Dotson says, “It is so important for kids to have as much normalcy as safely possible. Playing sports isn’t just about physical health. It is about mental and emotional health as well.”

Keith Hanson, whose son has played on the team since the inception says, “Bobby immediately took an interest in the physical nature of the sport. It’s a lot of cardio and a fun way for the kids to get in shape without even noticing how hard they are truly working.”

Kristi Hansen’s son, Myles, has been playing lacrosse since 7th grade after attending a summer camp where he fell in love with lacrosse.” Hansen says, “Team sports teach so much more than the game. Cooperation, working for a common goal, commitment, the joys of winning. And how to pick yourself up and keep going when you lose.”

Brandie Price sees many benefits from her daughter playing lacrosse. “Olivia’s confidence has grown both on and off the field,” Price says. “She has made lifelong friends. And the scholarship opportunity is great.” Price can’t say enough about Coach Allen. “She loves our girls like her own. Her mentoring doesn’t stop off the field. Our girls know they can reach out to her for anything and it stays confidential. We just love Rebecca.”

Parents call Dotson the glue that holds Wild Tide together. But she is quick to credit others including her board of directors and even her daughter who first showed interest in lacrosse. Dotson does everything in the best interests of players and parents. She along with Oehler and Allen are developing programs for elementary and middle school students “to get sticks in hands at earlier ages.” She does what she can to keep costs reasonable, like reserving blocks of hotel rooms and obtaining grants. This past fall, Wild Tide was awarded $1,000 from Dicks Sporting Goods.

Hanson speaks for all the parents when he says, “Lacrosse is more than a sport. We are a family. And a tight-knit one at that. Parents and children alike get back tenfold of what they put into this game in lasting memories and great friends.”

Dotson tears up when talking about her players. She concludes, “I am so proud of them. They are the pioneers of lacrosse in Brunswick County.” 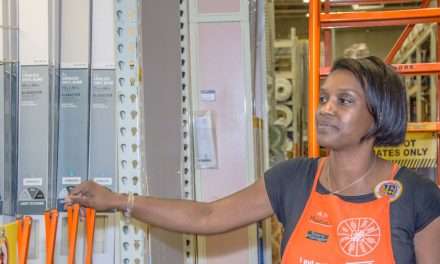 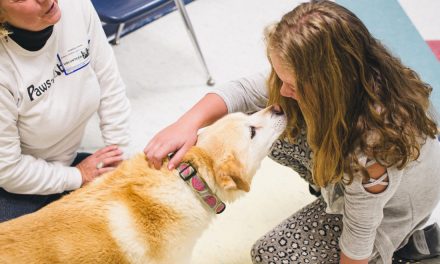 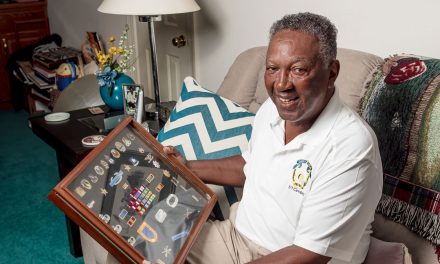 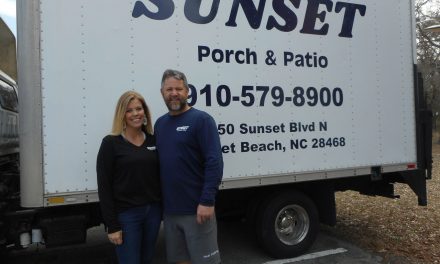