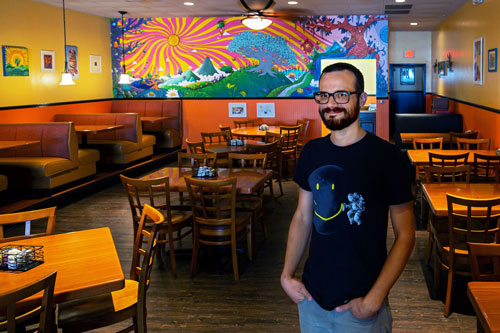 Michael Pellegrino, owner of Eternal Sunshine Cafe in Wilmington, has opened a second location on Village Road in Leland. The new cafe has an attached retail shop, LunaBelle Gift Shop and Gallery, run by Chelsea Pherson. LunaBelle not only shows local artists’ work, but also has items such as paintings, clothing, soaps, jewelry and photographs.

To help with the restaurant’s decor, Pellegrino reached out to the local artist community asking for sketches depicting their version of “eternal sunshine.” Artist Gaeten Lowrie’s design for a mural fit the bill for the positive vibe Pellegrino envisions for his cafe, and Pellegrino commissioned Lowrie to paint a mural inside the breakfast restaurant.

“Eternal Sunshine Cafe is a place all about good thoughts and looking forward,” Lowrie says. “It will be a place where people can come together and be a community.”

The mural was such a hit that Lowrie was also asked to do a moon mural inside LunaBelle, as well as create the shop’s logo.

Lowrie’s artistic tendencies started young, and he attributes his artistic talents to a family trait. “My grandmother was artistic and did art on the side,” he says. “My mother also dabbled in it. They both were great supporters of the arts.”

Lowrie was born in Tarrytown, New York, a town just north of the famed village of Sleepy Hollow. As a young child, his family moved to Raleigh, and in 2003 he found his way to Wlimington to attend UNC Wilmington. In 2007 he earned a Bachelor of Fine Arts in Creative Writing. After falling in love with the area and its art scene, he decided to make Wilmington his permanent home.

It wasn’t until after graduation that Lowrie actively pursued art as a career. In 2009 he founded Thrive Studios in Wilmington.

“It was neat because we had a gallery where artists could rent space,” he says. “They had free rein to create their art. At the time, we usually had nontraditional artists. The artists came in as complete strangers, but we bonded and became close friends.”

Even though Thrive Studios has since closed its physical doors, he still works under the umbrella of the name to continue connecting to other artists, supporting them and spreading the news of job opportunities.

Lowrie is a man of many talents. He likes photography, writes poetry and in the past had the experience of working in several Wilmington restaurants as an accomplished pastry chef.

“Growing up, I spent a lot of time on Sundays in the kitchen with my grandmother and mother baking,” he explains.

Lowrie left the restaurant industry because he found that it didn’t leave enough time to pursue his passion for art. 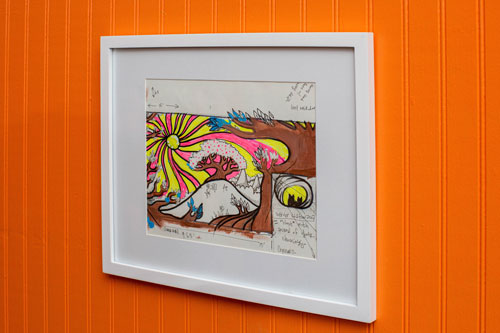 Currently, he keeps a busy schedule working not only as a freelance artist, but also as a house painter and cleaning rental properties. “I can conceptualize ideas for my art while house painting,” he says.

Inspiration comes from the causes he’s passionate about and through exploring the world during outdoor activities. “I take photographs and then I paint pictures based on my experiences,” he says.

Lowrie strives for peace and harmony in his life and considers himself an avid environmentalist and a proponent of all causes that better humanity. “My art reflects that,” he says. “I want to make art I’m proud of, but at the same time it has to mean something to the people I’m creating it for. I want them to be happy.”

Even with this demanding work schedule, he continues to be active in the community and donates his art to local charities, such as Cape Fear River Watch and Oasis NC, an organization providing services to children with learning differences. Working for Eternal Sunshine Cafe and LunaBelle was a good match, as he is a big proponent of the “support local, shop local” mentality.

“It’s important to give back to the community,” he says. “I want to get to the point of living comfortably, but because of my nature, money is not my focus.”

Lowrie is best known for his uniquely vibrant colored pen and alcohol ink art, and many of his pieces resemble stained glass.

“Because the ink evaporates quickly, I break it down to where I do a section at a time, layering paper on paper, similar to a collage,” Lowrie says. “I started off as more of an abstract artist with color and composition, but now I do more flora and fauna.”

For the mural inside Eternal Sunshine Cafe, he invested more than 100 hours, and it is one of his biggest endeavors thus far in terms of a mural. He digitally scanned his original outline, projected it onto the wall and traced over it while in the dark. He then filled it in with acrylic paints and other mixed media, such as metallics, glitter and his signature alcohol inks, for the sun and moon. He credits his wife, Ash, who is a make-up artist in the film industry, for helping him with painting.

He says he orchestrated the Eternal Sunshine Cafe’s theme, yet at the same time, stayed true to his artistic form. “I didn’t want anything manmade in the painting,” he says.

The mural gives a feeling of positive energy through the use of all things natural emanating from the sun: bees, frogs, flowing water, butterflies, sunflowers and more. There is only one outline of a human, which is a nod to his art series he named, “Forgotten.” The man can be seen drifting through the clouds on what appears to be a tree that suggests a hot air balloon. 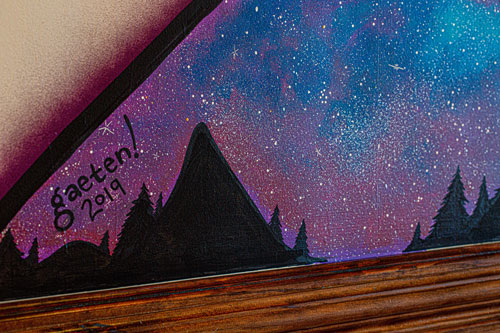 Lowrie also incorporated what he calls “The World Tree,” which is loosely based on one of his previous works; it has green orbs giving the feeling of weightlessness, like seeds floating through the air.

“One of my concepts for the mural is to have a ‘replay’ value,” Lowrie says. “So every time regular customers come in, they will see something new.”

Lowrie also wanted his mural to be kid-friendly and interactive; one can play a type of search-and-find game in the painting while enjoying good food and socializing.

Along with other artists, Lowrie will be selling his Art of Gaeten originals, including various-sized prints, calendars, postcards and stickers, in LunaBelle Gift Shop and Gallery.

“Art should be universal,” he says. “I want my art to be accessible and affordable for everyone.”

Lowrie also says he doesn’t want to lose his creative touch by producing the same art over and over.

“I don’t want to do it if it doesn’t make me happy,” he says. “The Art of Gaeten isn’t just a physical art but a lifestyle.” 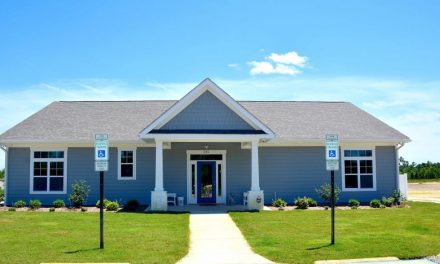 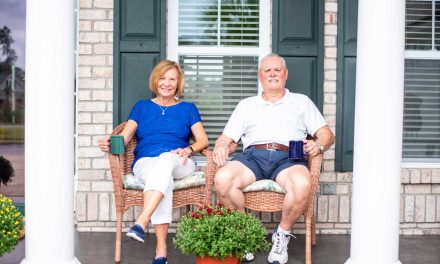 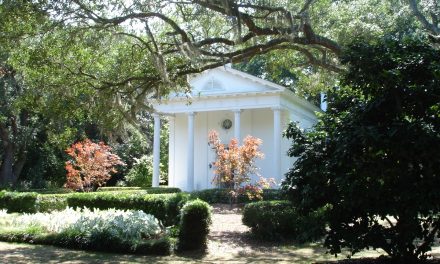 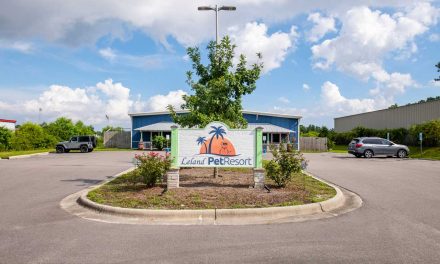