A Hero from Calabash

Luke Lucyszyn of Calabash, who gave his life to the war efforts in Ukraine, was honored by loved ones and strangers alike at Brunswick Plantation.

The question seemed to hang in the air on a beautiful late-summer afternoon, a somber presence in a bright room filled with guests and dotted by the blue-and-yellow colors of another nation’s flag.

What happens on a life’s journey to take a thoughtful, young father of two from Brunswick County to a hero’s death on a battlefield in Ukraine?

Family, friends and other guests had gathered in the community room at Brunswick Plantation in Calabash to celebrate the life of 31-year-old Luke Lucyszyn. Not everyone who wanted to be there could attend. In some cases, they were still fighting Russians. Instead, they wrote letters, letters that were read aloud, letters that painted a picture of a comrade, friend and hero.

“My name is A. J. Martinez. I served with Luke in the Ukrainian Army,” began one of the letters.

“The Ukranians treated him as one of their own,” wrote Martinez, an American who said he joined the Special Purpose Brigade on the same spring day as Luke. “He had no fear … I trained him personally and I helped him acquire better gear when I could.

Luke wasn’t selfish and showed great character the whole time I knew him.”

Martinez shared a story about how Luke left his rucksack with many of his possessions behind so everyone could squeeze into an escaping vehicle in the battle zone.

“He guaranteed my spot,” Martinez continued. “Luke is lost but will never be forgotten. When the war is won, there will be a statue created in Kyiv for all the foreigners who paid the ultimate sacrifice for Ukrainian freedom and democracy. They will all have their names etched in history. Thank you for being here to honor my friend.”

Some of those who came didn’t know Lucyszyn or even any of his friends, family members or neighbors, but they were drawn just the same.

Iryna and Oleksamgr Bobir and their three children, ages 1, 7 and 10, felt the tug. The Bobirs explained that they were Ukrainian refugees, recently resettled to Myrtle Beach with help from local organizations.

The young family waited their turn in the receiving line to thank Luke’s sister, Laura, and his parents, Kathryn and George, for the sacrifice. Kathy grasped Iryna’s hand, visibly moved by the gesture. They said “thank you” and offered comfort, reminding them that Luke didn’t die in vain; that he sacrificed for people like them.

Anastasia Sliusarenko from The World For Ukraine in Myrtle Beach came for the same reason.

“I didn’t know him,” she said when it was her turn to speak. “But I know for a fact that he’s my brother. He’s a true hero. We stand side by side with you the way he stood with us.”

“Heroes don’t die,” she added, then repeated the phrase in Ukrainian. 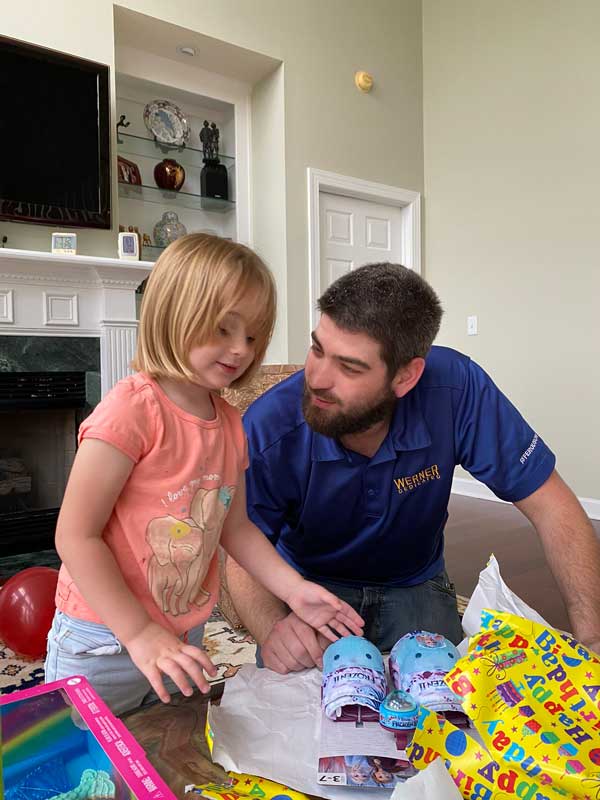 As Politico.com and other media outlets reported, Luke was one of two Americans, a Canadian and a Swedish citizen killed on July 18 when a Russian tank opened fire on them during a battle at the frontline in the eastern Donetsk region.

His commander, Ruslan Miroschnichenko, told Politico that the men were part of a special operations force based near Siversk, targeted by Russia’s invasion force.

According to the Politico report:
In an attempt to slow Russia’s advance, the foreign fighters were deployed to the village of Hryhorivka, two miles northeast of Siversk. There, Miroshnichenko said, “The guys were tasked to take their firing positions and clear a ravine where Russian forces were working to cross a river. They did it successfully. But at the end of the mission, they were ambushed by Russian tanks. The first shell injured Luke. Three guys, Edward, Emile and Bryan, they immediately attempted to help Luke, to do first aid, and evacuate him from this spot. Then the second shell killed them all.”

According to his parents, Luke paid his own way to Warsaw as he made his way to Ukraine. His parents still aren’t sure how he got into the war-torn nation from Poland, hoping to use his truck-driving skills to deliver supplies and support the Ukrainians.
But that wasn’t how he was needed. Instead, he and a circle of new friends and compatriots began assembling and delivering medical kits. He called home frequently and asked for help in getting better gear. Kathryn recalled contacting the Calabash Police Department to get tips on the best vests and other protective clothing.

That others died trying to help their son weighs on Kathryn and George Lucyszyn. His parents don’t believe Luke went to the Ukraine to be a hero. They believe he was following character traits that seemed hard-wired into his DNA.

“He knew what was right and what was wrong,” George said. “He was a good kid. He always knew what he was supposed to do.”

The Lucyszyns moved to Brunswick Plantation in Calabash in 2008 as Luke was starting high school. George took early retirement from work as a computer programmer while Carolyn worked in market research for Campbell Soup among others. 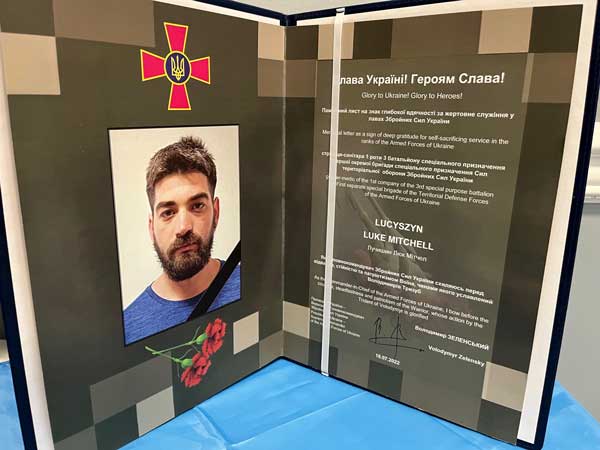 They met years ago in Wildwood, New Jersey, when she was a waitress and he was a busboy during a summer at the Jersey shore.

Luke, they said, graduated from West Brunswick High School, tried college, loved paintball, fathered two children he cared deeply about, traveled for construction jobs, bought a house in Myrtle Beach and obtained a commercial driver’s license. They had been frequent international travelers as a family, so he wouldn’t have been intimidated by the idea of going to Europe.

According to his parents, Luke was laid off from a job at UPS in January, shortly before the Russians invaded Ukraine in late February.

The urge to make a difference tugged at him, reinforced when his mother and others in the Brunswick Plantation neighborhood collected clothing and other supplies to send. “We filled a garage with clothing and supplies,” Kathryn recalls. “Everyone in the neighborhood got involved, and we took everything to the port in Wilmington.”

He also was deeply aware of his own Ukrainian heritage, 100 percent on his father’s side. George said his family came to the Philadelphia area as refugees escaping the Soviet occupation after World War II. Looking back, his parents said that at first they didn’t realize just how serious Luke was.

“He started saying, ‘I need to help these people,’” Kathryn said. “It was touching to him.”

As the weeks went by after Luke arrived in Ukraine, they couldn’t convince him it was time to come home. He couldn’t pull away from those he was helping and his brothers in arms.

His parents said they’ve been lifted by support and encouragement from around the world as well as wonderful neighbors and the Ukrainian community in Myrtle Beach, demonstrated by stacks of cards, countless emails and many phone calls.

They remain in the lives of their grandchildren, ages 4 and 8, who someday will know many of the stories shared on that summer day at Brunswick Plantation.

Still, the Lucyszyns have been left to mourn while picking up pieces left behind, including their son’s estate and logistics that can only be imagined when a loved one dies in an overseas war zone. During an interview in late September, they said they were still working with the U.S. State Dept. to obtain the rest of Luke’s belongings after going through a draining, complicated process to have his remains flown home.

Meanwhile, there are efforts emerging to remember Luke locally. His paintball friends want to recognize him at a tournament, and there’s talk of a fund-raising golf tournament in his name. 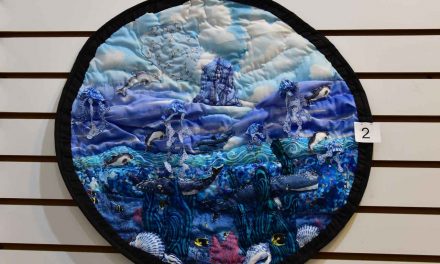 A Whale of a Charity 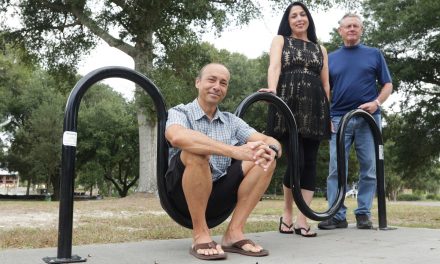 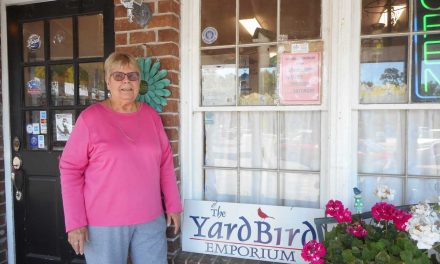 The Beauty of Birds