A College for the Community

Story By Teresa A. McLamb

As Brunswick Community College celebrates its 35th anniversary, take look a back at the college’s history and its impact on Brunswick County.

When my classmates and I graduated from Shallotte High School in the early 1970s, a few of us went off to school at the state’s universities – UNC-Chapel Hill, N.C. State and ECU – and a handful moved to Chadbourn or Whiteville, renting rooms within manageable driving distance from Southeastern Community College.

Brunswick Community College did not exist.

It wasn’t until the end of the decade that a local woman spearheaded a drive to bring a college to the state’s southernmost county. It’s now known as Brunswick Community College (BCC). To commemorate BCC’s 35th anniversary, I’ve compiled a history of the school. I’ve had the extreme pleasure and challenge over the past eight months to scour board of trustee meeting minutes, newspaper clippings and annual reports and to talk with many who were involved from the beginning. The history, which I completed in February, is being shared with the community and will be available in the college’s Annual Report. The following information is gleaned from that history. 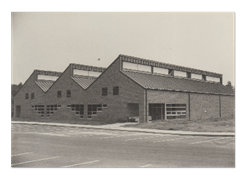 Brunswick County residents can thank Bobbie Varnam for their college. Varnum was tired of driving 105 miles round-trip to Chadbourn for classes at Southeastern Community College while also working at DuPont in Leland, so she approached Brunswick County Commissioner W. A. Stanley in 1978 about the possibility of establishing a college in the county. The two quickly enlisted the advice and assistance of others, and by April 5, 1979, the State Board of Education sent a letter of approval regarding a community college to the Brunswick County Board of Commissioners.

BCC is now one of the top five largest employers in Brunswick County, with approximately 460 employees. It is ranked 44th in enrollment within the 58 colleges of the state system, and it is accredited by the Southern Association of Colleges and Universities. BCC reached a particularly meaningful milestone in September 2007 when Jwantana Frink became the first school graduate to serve on the board of trustees.

The school has grown 56 percent in the past seven years. Initial funding came with House Bill 33, which allocated a budget of $96,798 for operating expenses and instructional and administrative equipment. The state supplied $76,798, but the remainder was local funds. The 2013 budget was $19 million. A 2012-13 study measured the school’s economic impact at $93.9 million for the school year.

BCC has thrived under the leadership of four presidents, beginning with Brunswick County native Dr. Joseph Carter in 1979. He was succeeded by Dr. Michael Reaves. Upon Reaves’ retirement in 2005, Dr. Stephen Greiner accepted the post. Dr. Susanne Adams joined BCC in 2011 and has the daunting task of leading the school into an increasingly complex future.

The school opened in a 3,732-square-foot cinder block building next to Supply Baptist Church at the intersection of U.S. 17 and N.C. 211. James J. and Ethelyn Hawes donated the building to Brunswick County in 1959. Today it serves as the Brunswick Education Transition Center (BETC), and BCC’s main campus is on 194.75 acres located in Supply. The original board of trustees committed to purchase the land in 1980 and secured the final piece in 1986. The board of education donated the school’s Southport facility in 1981. It has been renovated numerous times, including the most recent renovation, which is being completed this year. Brunswick County constructed the Leland campus and donated it to the college. 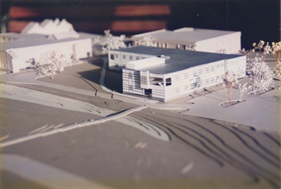 The first building on the permanent campus (Building D, Technical and Trades) was completed in October 1983 at a cost of $658,000. Cosmetology and nursing classes moved from Southport, and business and general education moved from Supply. By spring the college had 540 curriculum students and 2,000 continuing education students clamoring for more offerings. Through the years, Building D has housed classes in welding, turfgrass management, computer engineering, heating and air conditioning, electronics, drafting and the Center for Advanced Studies program in which high school students take college courses.

BCC’s building program has been consistently strong thanks to successful passage of bond referendums: $8 million in 1985 and $30 million in 2004. Future growth will require additional bond funding.

In 1984, the school constructed the Brunswick Interagency Program (BIP) Program. BIP is the only adult vocational program of its kind in North Carolina. The program combines the resources of the public school’s exceptional children’s department, Southeastern Mental Health (SEMH) and BCC. It is nationally accredited by the Council on Accreditation. In 2013 BIP celebrated the 23rd annual prom for adults with I/DD, and more than 300 participants attended. It is housed in 18,339 square feet costing $1,388,434.

Other early construction starts are Building C (classroom/laboratory/office) in 1987, Building A (administration/library/student services or ALS) in 1987, Odell Williamson Auditorium in 1991, recreational grounds management and aquaculture in 1998, and Building B (science and health education or SHE) in 1996. In 2003 BCC donated 15 acres on campus for construction of Brunswick County Academy. The 70,000-square-foot school complex serves at-risk students from across the county.

Funds from the 2004 referendum were targeted for the Dinah E. Gore Fitness & Aquatic Center, the LaDane Williamson Student Center addition, an early childhood education facility, a continuing education center, improvements to the Southport and Leland campuses and outreach to the island communities which included the establishment of the South Brunswick Islands Center.

“We have such a large county, about 850 square miles, we needed to have classrooms closer to our population,” Dr. Reaves explained in 2013.

Keeping in mind that student success is vital to the school, Dr. Adams and the trustees recently created a new committee focused on student success: the Student Affairs Committee of the board which is chaired by Lynda Stanley, former chairperson of the board of trustees.

“After reviewing our meeting agenda, it became apparent that our focus was on buildings, bonds and budgets,” Stanley says. “The least amount of time was spent on our most important asset – our students. We needed to hold ourselves and our president accountable for the success of our students, and the only way to do that was to keep it at the forefront of our discussion…to create a board committee through bylaw changes and to make it a part of our standard agenda. This level of transparency has forced us to identify opportunities for improvement and to track our success and ultimately the success of our students.”

By focusing on student success and careful growth, BCC is a local success story.

“I think we’re exceptional because we don’t have a lot of financial resources, but we have a lot of things others don’t have: the aquatics center, the Odell Williamson Auditorium, the aquaculture program,” said Ben Deblois, the school’s long-serving business manager, shortly after his 2013 retirement. “These were made possible by the people we hired, who were always local people. The people in the trenches were local people who were committed to the college. We’re truly a community college built by local people.”

“The original mission of community colleges was to give citizens access to educational opportunities beyond high school. Before BCC existed, those opportunities were limited for many Brunswick County citizens. Since its creation, BCC has used financial capital and the labor of dedicated staff and faculty to fundamentally change the lives of many who called Brunswick County home. That transformation process has helped move the county from an agricultural/fishing society to one that can be competitive in numerous industries.” 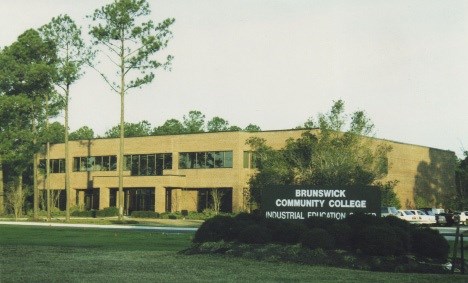 1978 – County Commissioners approved the concept of a technical institute

1979 – First Board of Trustees installed

1980 – The college opened its doors with nearly 100 curriculum students and 2,400 continuing education students

1983 – Ground broken for a permanent campus

1997 – Small Business Center expanded to include business incubator in Winnabow

1998 – BCC re-accredited by Southern Association of Colleges and Schools

2009 – BCC reaccredited by Southern Association of Colleges and Schools

2009 – Women in Philanthropy and Leadership formed

BCC proudly fields teams in basketball, baseball and volleyball, loudly cheered by the school mascot, Dunkin the Dolphin. The school is a member of Region X Division I and II, and the team and school colors are teal, navy and white.

Heading into the school’s 35th anniversary, BCC has been successful in competing for national championships in three sports as well as promoting student athletes to four-year institutions. The baseball team won the Region 10 championship and competed in the World Series for the first time. Coach Robbie Allen, also athletic director, was voted the Region 10 Coach of the Year, and pitcher Zach Andrews was named Region 10 Player of the Year. Andrews and Hunter Allen were named NJCAA All Americans. 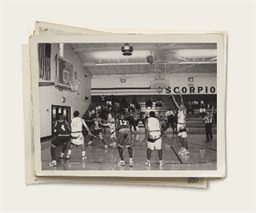 Coach Walter Shaw leads the basketball team, which won the Region X tournament in 2004. For his role, Shaw was named 2004-05 Region X Division I Coach of the Year. The team set a record again in 2010 when it became the first BCC basketball team to earn the right to play in the National Junior College Athletic Association Tournament.

Volleyball re-emerged in a big way as the 2008-09 team coached by Stephanie Beach McMullen went to the national championships. In 2013 women’s basketball finished fourth in the conference but had an impressive win in January over the number 3 team in the county and went to the Region 10 tournament for the first time.

BCC’s athletic department and student athletes are committed to their community; they logged 1,296 hours of community service in the 2012-13 school year.

“Since my arrival in 1993, I have watched the college grow to become a true college for the community. Not only are there excellent academic programs and an Early College High School, but there are also cultural arts, wellness programs, athletics, child-care facilities, meeting locations and opportunities for the handicapped that have touched thousands of citizens of Brunswick County. I am proud to have been a small part.”

Since its inception in 1982, Brunswick Community College Foundation has supported the development of the college, its programs, its activities and, most importantly, its students. In the fall of 2013, BCCF had an endowed fund level of $2,289,756.89 and awarded $97,000 in scholarships.

A newspaper report in November 1981 described the mission of the newly formed foundation to “provide contributions of money for the support of activities and programs not funded adequately through regular sources. These include activities such as building campaigns, work-study opportunities for students, scholarships, faculty merit awards, special library acquisitions and cultural events.” The hope was also that the foundation would provide an opportunity for more public involvement in the college.

Through prudent investment and oversight, the foundation’s portfolio continues to grow. With 16 percent of county residents living in poverty in 2013, the need to support educational scholarships is great, and the foundation strives to cultivate new donor sources.

The foundation board also gave renewed emphasis to the Legacy Program, planned giving and relationship building. As 2012 closed, the foundation honored two major contributors with building naming dedications. The technical and trades center, Building D, was named the W. J. and Sibyl McLamb Building. In early 2013 the student center was named the LaDane Williamson Student Center.

At the 2013 Dancing with the Brunswick Stars event, a BCCF fundraiser, BCCF unveiled a newly created award to honor individuals who have unselfishly given of their time, talents and resources to the school, the community and the world. The award will be given from time to time as deserving recipients are identified, but it will always be named for its inaugural recipients: The Clarice and Ronnie Holden Humanitarian Award. 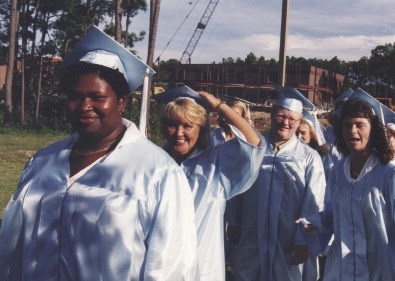 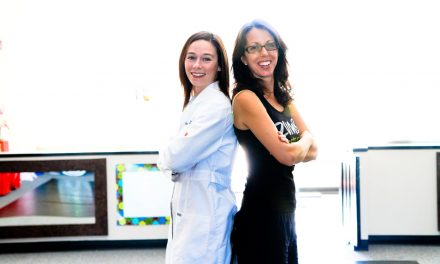 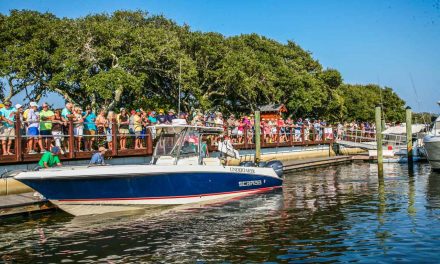 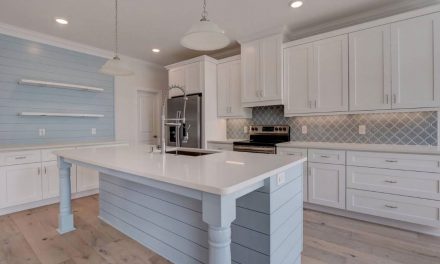